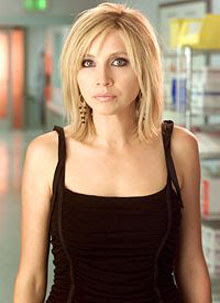 Take heed, no. 1 seeds: Sarah Chalke means business when she cuts her hair, dons that outfit and starts strutting to "All-American Girl." And she expects you all to win today.

Near the end of the second overtime of Syracuse-UConn last night/this morning, Semi-Loyal Reader Eric asked me via instant message (how 1999, yes?) if the game was better than last month’s Flying Dutchmen-James Madison double OT classic.

Four overtimes later and an epic 127-117 win for Syracuse later, the answer was easy. Yes. And no.

Yes because, well, hell, who’s ever seen a game go to six overtimes? Short answer: Nobody you or I know. Only one Division I game has ever gone to seven OTs (Cincinnati-Bradley in 1981) and according to ESPN play-by-play guy Sean McDonough, the first two games to end in six OTs occurred in the 1950s.

It was memorable for anyone who watched it and quite the communal experience on my Facebook (or, as I now call it, the post-modern water cooler/lunch table). It would have been awesome to cover. And if I had covered the game, I’d be on the phone today pitching a book about it. The proposal would feature Jim Boeheim’s awesome quote: “It’s a lot better to win the greatest game ever played.”

Yet it’s not necessarily better than Hofstra-JMU, because for all the drama and suspense of the actual game, there was no drama or suspense in the reward. No matter what happened last night, both teams are going to the NCAA Tournament. There was really nothing at stake. It was an exercise in you-know-what swinging for the Big East: LOOK AT US! WE’RE ON ESPN ALL WEEK! AND WE’RE SO DEEP THAT THESE TWO TEAMS PLAYED THIS EPIC GAME IN THE QUARTERFINALS!

I’m moderately biased, but I’d say there was more at stake in Hofstra-JMU in February than ‘Cuse-UConn in March. The Dutchmen and the Dukes were battling for momentum and a valuable bye in a one-bid conference. The Dutchmen didn’t get the bye, but the Dukes never recovered from losing in Hempstead, either.

And can you imagine a six-OT tournament game in a mid-major conference? With one NCAA bid on the line? That would have provided unbearable amounts of drama and suspense and made it a game truly worthy of the moniker “greatest ever played.” Of course, only a few of us would have appreciated it, since ESPN wouldn’t devote half of SportsCenter to it. Which is the way we like it, this bit of kvetching aside.

Anyway…I just spent nearly 400 words ranting about the Big East in a blog about how the Dutchmen’s NIT chances are being affected by the mid-major conference tournaments. Is that ironic?

Back to business: The Chalke had another perfect night Thursday in games that weren’t breathlessly broken down on The Worldwide Leader. No conference champions were crowned, but top seeds Bowling Green, Stephen F. Austin and Utah State all won their quarterfinal games.

In addition, the Dutchmen might have been helped by the losses suffered by UTEP (C-USA) and Saint Joseph’s (Atlantic 10). UTEP has 19 wins, and while the expansion of Division I over the last 15 years means 20 wins is no longer the unofficial magic number for the NIT, the fact is it’s still a gaudy figure that 95 teams have already reached. So the fewer teams that make it to 20 this weekend the better.

And while Saint Joseph’s opened the week just ahead of the Dutchmen in the RPI and play in a better conference, the Hawks are only 17-15, so let’s hope the meager record works against them.

There will be no shortage of pivotal games involving Chalke teams today as the mid-majors begin sprinting to the finish line. The only title game is in the Patriot, where top-seeded American hosts Holy Cross, but six top seeds are participating in semifinals in the Big West, Mid-American, MEAC, Southland, SWAC and WAC.

It’s too much to expect another perfect night, but let’s hope Friday the 13th isn’t a particularly bloody one for the Dutchmen’s NIT/postseason hopes. More later today or tomorrow, by the way, on some possibilities for the Dutchmen and the Collegeinsider.com Tournament.

Email Jerry at defiantlydutch@yahoo.com. And join the Defiantly Dutch group at Facebook today!
Posted by Jerry Beach at 3:17 AM