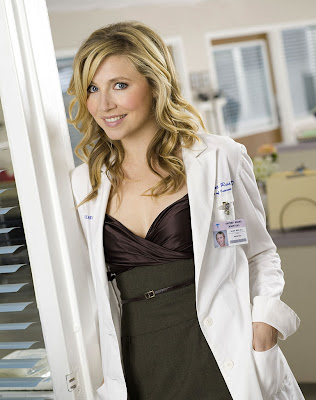 Good thing there's only four days left before the NIT field is revealed, because there's a whole lotta Sarah Chalke pictures out there, a whole lotta which will get you (or me) in trouble at work (or at home).

Things went about as well as could have been expected for the Flying Dutchmen’s NIT hopes last night. The Chalke (yes, that’s my new March Madness spelling of it) went 2-1, with Weber State getting upset at home by Montana State in the Big Sky semifinals.

That makes four mid-major regular season champs headed for the NIT, but it could have been five or six because 1-2 easily could have been 0-3. North Dakota State came back from a 14-point deficit to beat Oakland in the final seconds of the Summit League championship game while Western Kentucky got off to a fast start against South Alabama and survived a mid-game funk to hang on in the Sun Belt title tilt.

NIT bubble teams may have been helped by Cleveland State’s upset of Butler in the Horizon League championship game. You want to feel the hair on your arms stand at attention, by the way, check out the highlights of that game, with Cleveland State coaches and players alike shedding tears of joy.

Of course, the net effect of Cleveland State’s win is probably zero when you consider that a team that would have missed the NIT had Cleveland State made it will probably still miss it, since a Saint Mary’s or a San Diego State is going to fall into the NIT from the NCAA. And the NITology site still has the Dutchmen well down on the bubble.

Hofstra isn’t the only CAA school observing conference tournaments with interest. Old Dominion is so confident it will host a game in one of the three non-NCAA Tournaments that it will begin selling tickets Friday, while James Madison is continuing to practice in hopes its long-shot bid for the CBI or CIT comes through. Hey, if the Dukes are willing to pony up, the CBI will probably throw ‘em a home game.

A few left over bits and bytes from the CAA Tournament:

—Whether you were hitting “refresh” all weekend or not (and if it’s the latter, shame on you), take another trip down memory lane with Litos’ tournament blog. It went well enough that he’s already thinking about next year. But I refuse to be satisfied until he unveils “BruiserCam.” That NEEDS to happen.

—It didn’t work out the way we would have liked, but the Dutchmen-Old Dominion quarterfinal lived up to the hype (Let’s hear it for me and Litos! We are so smart! We are so smart! S-M-R-T I mean S-M-A-R-T!) as the best game of the tournament. And there was little competition for that honor: Only one other game (Towson’s 58-54 win over Northeastern in the quarters) was settled by less than eight points. Not quite the nail-biting weekend we envisioned after an unpredictable regular season, but that’s why they play the games.

Does this mean ODU will be a perennial also-ran in whichever conference the Dutchmen are in come 2024? I’d like to say I hope so, but I can’t muster up any contempt for the Monarchs. They’re just a really good, solid, well-coached team.

—Speaking of contempt, I was too busy reveling in George Mason’s thumping yesterday to marvel at just how impressive VCU was in the championship game—not just winning like it did, but winning like it did in the only game of the year that mattered. Navigating the land mine of the CAA and winning a record third straight regular season—all in a season surrounded by a last-time-around vibe—was an impressive accomplishment, but the Rams had to win on the second Monday of March to validate their entire season.

Fair? Of course not. But that’s how it works in a mid-major, especially one with a graduating stud of a senior and a hot young coach likely destined for a BCS school by this time next month. That’s huge pressure, and to play a nearly perfect game like the Rams did with 365 days of buildup is remarkable.

Email Jerry at defiantlydutch@yahoo.com. And join the Defiantly Dutch group at Facebook today!
Posted by Jerry Beach at 5:59 AM