Ode to the UDee days 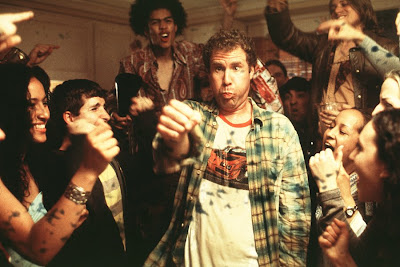 Sully Ray, above, makes many new friends at the Stone Balloon circa many a March weekend between 1996 and 2000.

The Flying Dutchmen play Delaware in a pivotal late-season conference game today, and the fact that there aren’t at least two carloads of us headed to New-ARK is a two-pronged reminder—beyond, you know, the birth certificates, graying temples (not me, though!) and growing paunch around the midsections (OK that’s me)—that we’re not in our early 20s anymore.

Back then, it was easy to jump in the car and cruise down I-95 for a weekend of socializing and watching an increasingly competitive rivalry—one with an authentic big brother-little brother dynamic.

Everyone gets married and everyone begins to make decisions with the head and not the heart. I spent the first three months of 2001 traveling everywhere to see the Flying Dutchmen—even North Carolina for the NCAA Tournament—even though I was unemployed and living on my maxed out credit cards. You know, if all of America followed my lead, the economy would fall apart.

Some lose interest in the fortunes of the alma mater. Some start families and spend their weekends toting their children to and fro. Some of those without children are consumed with buying some wallpaper and maybe some flooring at Home Depot and trying to figure out a way to fit in a trip to Bed, Bath & Beyond as well. I don’t know if Sully Ray, err, Frank will have enough time in the weekend.

And sometimes Stuff Happens and makes it impossible to follow through on plans to get down there…like last Feb. 27, when Sully Ray and I planned to see Antoine Agudio break the Hofstra all-time scoring record, at least until Employer I Shall Never Mention Here (Probably) dropped the two-ton neutron bomb and unwittingly birthed this here blog.

The rivalry is different now, too. In the mid-to-late ‘90s, Delaware was everything Hofstra wanted to be. It was Delaware that recognized the sinking ship that was the East Coast Conference and bolted following the 1990-91 season for the North Atlantic Conference, where it won the championship and the automatic bid to the NCAA Tournament in its first two seasons.

Midway through the decade, it was Delaware that hired a young, promising coach to revitalize the men’s basketball program and watched Mike Brey lead the Blue Hens to another pair of trips to the Big Dance before he landed the head job at Notre Dame.

In football, Delaware—with its multiple national championships and seemingly annual trips to the I-AA playoffs—was the standard by which Hofstra’s fledging I-AA program wanted to measure itself (even if Joe Gardi and Tubby Raymond had about as much use for each other as oil and water).

Like Hofstra, the Delaware campus was located in a market in which pro sports ruled. But Delaware’s success in football and basketball allowed it to carve a pretty good niche for itself in the Philadelphia/Baltimore area and to regularly play in front of near-capacity crowds at Delaware Stadium and the Bob Carpenter Center, which were two of the multiple sparkling facilities on and around the campus that helped Delaware emerge as the jewel program of the America East.

The biggest indicator of Delaware’s exalted ruler status occurred from 1996 through 2001, when the first three rounds of the men’s basketball tournaments were held at the Bob. Sure, it provided Delaware an inherent advantage—the Blue Hens made four straight finals from 1998 through 2001—but the flawless execution of the tournament made it tough to argue there was a better spot for it than the Bob.

But the rivalry has been dimmed somewhat by the CAA and the divergent directions taken by the basketball and football teams. Hofstra-Delaware is no longer the central rivalry in a southern-based conference whose men’s basketball tournament takes place in Richmond. Such placement unites Hofstra and Delaware fans in charging that the Virginia schools enjoy an unfair home court advantage. Isn’t it ironic?

Little brother has surely surpassed big brother in basketball. Jay Wright was hired a year before Brey and his rebuilding project at Hofstra took a bit longer, but Wright eventually followed in Brey’s footsteps by parlaying the Dutchmen’s back-to-back conference titles into a gig at Villanova. It seemed appropriate that the championship Dutchmen teams had to emerge from Newark—where anyone who played Hofstra was automatically the crowd favorite—and then beat Delaware in the title game.

Brey left for Notre Dame after the 1999-2000 season and was replaced by another former Duke assistant in David Henderson, who led the Blue Hens back to the A-East title game and to three straight .500 or better finishes in the CAA before the wheels fell off in his final two seasons. Wright was replaced by his assistant Tom Pecora, who may or may not be popular with the masses but, after opening his tenure with three straight losing seasons, has since led the Dutchmen to three NIT appearances and has this year’s squad in contention for another postseason berth.

Big brother continues to rule in football. The Flying Dutchmen became a regular playoff participant under Gardi, but it never quite got to the level enjoyed—on or off the field—by Delaware, which remained a roadblock for the duration of the Gardi Era. The Dutchmen’s first and most unlikely bid for a playoff berth in 1994 ended with the classic and unforgettable 41-41 tie at Delaware in the season finale. And Hofstra’s first two trips to the I-AA playoffs ended with first-round losses to the Blue Hens in Delaware.

The Dutchmen have won four or fewer games three times in the last six years. The Blue Hens lost eight games in 2008 for the first time in the program’s 117-year history. Even last year, Delaware drew more than 20,000 fans to each of its six home games, extending its streak of home games with at least 20,000 fans in attendance to 39. Hofstra didn’t draw 20,000 fans for the season (18,022 in five games).

Such passion is symbolic of the bond Delaware continues to enjoy with its fan base, one Hofstra can’t seem to match no matter how well its teams perform. The Arena turned into a ghost town again during last year’s 12-19 campaign, proving that all Hofstra has to do to keep fans turning out is go 26-7 and garner national headlines for getting screwed over every year.

Despite the meager crowds at the Arena, men’s basketball is the unquestioned engine of the Hofstra athletic program and the Hofstra-Delaware rivalry no longer gets the blood flowing up here. There are new rivals and new programs to emulate and, hopefully, one day surpass.

But maybe, with Delaware stirring—the Blue Hens shocked George Mason Thursday—and the Flying Dutchmen needing to win out to have a shot at a first-round bye, the two teams can turn back the clock for a couple hours this afternoon and play a game worthy of the late ‘90s. Maybe we’ll be there to see old school and new school meet…or maybe we’ll see it on MSG-Plus after spending hours at Bed, Bath & Beyond.

Email Jerry at defiantlydutch@yahoo.com. And join the Defiantly Dutch group at Facebook today!
Posted by Jerry Beach at 12:43 PM