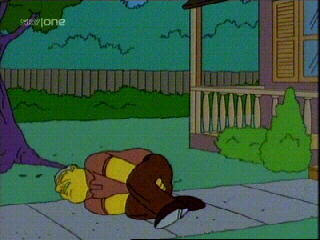 George C. Scott stars as Tom Pecora in "Team Getting Hit By Basketball In The Groin."

Well…at least the punch in the jewels this time was only of the symbolic variety. Right?

The didn’t-quite-work-out-the-way-I-would-have-hoped-and-let’s-leave-it-at-that 76-52 loss to George Mason Tuesday night wasn’t the first time the Patriots have symbolically punched the Flying Dutchmen in the crotch since Tony Skinn’s real thing three years ago. There was, of course, the 64-61 upset win over the Dutchmen in the quarterfinals of the CAA Tournament two years ago, when Greg Johnson drove to the basket with Hofstra down three as time expired instead of trying to hit a 3-pointer. Then there was last year’s 85-78 double-overtime loss in Hempstead, which would have been a regulation win had Antoine Agudio hit both free throws to give the Dutchmen a four-point lead in the waning seconds.

Those were painful, but this was worse—another non-competitive loss to a CAA contender, and perhaps the most discouraging and most thorough one yet. The Dutchmen trailed wire-to-wire for the fourth time in seven games against the top four teams in the conference, against whom they are just 1-6. They were down by 34 late in the second half (their largest deficit since the season opener against Clemson) and suffered the program’s most lopsided conference defeat since a 71-47 loss to UNC-Wilmington Jan. 4, 2003.

By midway through the second half, I was listening to the XM ‘90s station being piped in at the restaurant and trying to see how many songs could serve as an appropriate soundtrack to the game. Winners in the literal interpretation division included “Barely Breathing” by Duncan Sheik and “Closing Time” by Semisonic. Winners in the ironic interpretation division included “High Enough” by Damn Yankees, “Shiny Happy People” by R.E.M. and “You Get What You Give” by the New Radicals. Songs that had nothing at all to do with what we were watching included “Damn I Wish I Was Your Lover” by Sophie B. Hawkins and “I Don’t Wanna Fall In Love” by Jane Child. Remember her? Had the spiked hair and the chain from her nose to her ear? Probably showing up on a VH-1 “Where Are They Now” show as I type?

Where was I? Oh yeah.

Despite Hofstra’s size advantage, Mason outscored the Dutchmen in the paint 38-24 and held a 28-22 advantage on the defensive boards. Darren Townes had perhaps his best game of the year with six points and nine rebounds in 23 minutes, but I wonder if we’ve seen the last of Dane Johnson in a meaningful role after he gave up three inside baskets in a seven-minute stretch in the first half and sat the final 30 minutes.

Tom Pecora put in a smaller, sharper-shooting lineup and switched to the press with the Dutchmen down 25 at the first media timeout of the second half, but the Patriots responded by breaking the press and converting two uncontested lay-ups on their next two possessions.

The Patriots scored 27 points off 19 Dutchmen turnovers (the Dutchmen scored just six points off 14 Mason miscues) and their bench outscored Hofstra’s bench 37-30, including 19-5 in the first half.

The Dutchmen had 23 offensive rebounds, but that’s because they shot 28.8 percent (19-of-66) from the field—the second-worst effort of the season and only a sliver better than the 28.6 percent they shot against Western Michigan.

It’s officially another slump for Charles Jenkins, who was 4-of-15 in his second straight subpar game and sat out the final 7:01, a la against Northeastern in Boston. But Jenkins was red-hot compared to Tony Dennison, who had the worst shooting night by a Hofstra player in at least three years in going 2-of-19 in 31 minutes. Cornelius Vines’ team-high 16 points were of the “lies, damn lies and statistics” variety: He hit his last three field goal attempts and outscored Mason 9-0 in the final 3:05, but he was just 2-of-12 shooting before that.

The struggles of Jenkins, Dennison and Vines symbolize part of what’s ailing the Dutchmen. For all the talk of the improved front court play and depth, the Dutchmen still rise and fall on the play of their guards, particularly on offense. A Hofstra player has taken at least 10 shots from the field 52 times this season. All but four of those efforts have been by a guard. The only post player to have more than one 10-shot game this season is Greg Washington. On Tuesday, Townes was the only post player with more than two points.

The Dutchmen aren’t as bad as they looked last night, because nobody is that bad. The hustle and effort still seemed to be there and teams that are 9-2 in games decided by five points or less have something a lot of teams are lacking. And the Dutchmen’s final six conference opponents are a combined 25-43 in conference play, which means there’s still some opportunity to rebuild the collective confidence.

But teams that are 1-6 in games against the top four teams in the conference—and are winless on the road against Northeastern, VCU, Mason and Drexel—can’t be expected to go deep in Richmond, either.

I usually frown upon trying to compare a team in one sport to a team in another. You know, apples and oranges and all that. But if you’re a Hofstra fan, all you can do at this point is look back to Sunday and hope the Dutchmen are the CAA’s version of the Arizona Cardinals, a team that fattened up on the also-rans on its schedule, got hammered by decent competition, made the playoffs only because someone had to represent the NFC West yet nearly became one of the most unlikely champions in NFL history.

And hey, a bottoming-out defeat at the hands of a team nicknamed the Patriots turned out to be the fuel to the Cardinals’ Super Bowl run. Yeah, we’re reaching. But if you saw the basketball-in-the-groin game last night, you understand. Come back tomorrow for an explanation of how else Jenkins, Vines and Dennison symbolize the Dutchmen’s other ailment.

Email Jerry at defiantlydutch@yahoo.com. And join the Defiantly Dutch group at Facebook today!
Posted by Jerry Beach at 9:05 AM

Hofstra is not the Arizona Cardinals of the CAA. Just saying.

The Dutchmen aren't even the Jane Child, one-hit wonders of the CAA. :)