I know you loved the old February home games, but this one is going to be better than 10 Super Bowls! 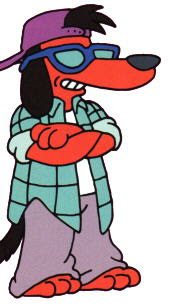 Poochie the rockin' dog is excited for tonight's game, too.

Times like these are when I like being a graduate of a non-BCS school. Because if Hofstra was in one of The Big Six, ESPN would have the hype machine in overdrive going into tonight’s game against James Madison.

The game would be the featured attraction on Holy Freaking Crap Wednesday. Bobby Knight would be on campus for ESPN’s pre-game show, whoring himself out on multiple levels by working for the media he loathes so much and volunteering that he’d sure like the chance to coach Hofstra if Tom Pecora leaves for greener pastures (more on that sometime soon).

We’d see Charles Jenkins’ game-winning basket against James Madison from 25 days ago replayed 4,000,000 times (that’s OK, actually, here it is again). We’d see a montage of clips—set to symphonic music, or Metallica, or whatever artist has sold its soul in exchange for a few seconds of airtime on Sunday nights, seriously, how many times did a new AC/DC song accompany highlights last fall?—that is intended to make us believe the two teams hate each other.

We’d be subjected to footage from sanitized, nobody-says-anything-worth-a-damn press conferences in which Hofstra players downplay the Dutchmen’s winning streak against Madison and in which Madison players try to avoid falling into the trap of giving the money quote that ESPN can replay 486 times in 24 hours (you know, something like “We want revenge, we want to eat their children’s children”).

Rachel Nichols and Ed Werder would report from Hempstead and Harrisonburg and breathlessly tell us absolutely nothing of importance. “Tom Pecora told me today he likes to eat pasta at the team meal. He ordered six trays of baked ziti from a local Italian restaurant, because five trays isn’t enough and seven trays is too many. He hopes Hofstra hits at least six treys tonight. Back to you, John.”

Instead, ESPN thankfully leaves us alone (until this weekend, when we’re all subjected to Bracketbusters—another once-good idea ruined by oversaturation, oh boy, Hartford’s playing Marist!) and leaves the hyperbole and exaggeration to hard-working, anonymous bloggers like me.

And let me make this abundantly clear: Considering the tournament seeding implications, this is THE BIGGEST REGULAR SEASON HOME GAME THE DUTCHMEN HAVE EVER PLAYED UNDER PECORA!!!! And it’s the biggest one since the Dutchmen beat Maine on Feb. 20, 2000 to clinch the regular season crown and the right to host the America East championship game.

The game against nationally ranked George Mason Feb. 23, 2006 is probably the most notable late-season game the Dutchmen have played at the Arena, but there wasn’t much at stake in that one from a seeding perspective (and we all know what the 77-66 win did to boost Hofstra’s at-large candidacy). The Dutchmen were 12-4 entering that contest and needed one win in their final two games to clinch no worse than the no. 3 seed.

This year’s situation is far more volatile. As of this posting, the Dutchmen can still technically earn the no. 1 seed if they win out and anarchy breaks out in the rest of the conference…or finish eighth if they lose out, Old Dominion wins at least one more game and Georgia State wins out.

The reality is the Dutchmen will almost certainly finish somewhere in the middle—literally. Even if all hell breaks loose, it’ll be tough for the Dutchmen to finish above fourth thanks to their inability to win the tiebreaker against any of the current top four teams.

Any hope the Dutchmen have of finishing fourth and earning the final first-round bye almost surely requires a victory tonight. A win over Madison would catapult them into a tie for fourth with the loser of Mason-Drexel and ODU, if the latter beats UNC-Wilmington, as well as give them the tiebreaker over Madison. The Dutchmen would then need to win their final two conference games (against Georgia State and UNC-Wilmington) while the Mason/Drexel loser and ODU lose once more apiece. (Though the Dutchmen would win a three-way tiebreaker with Mason and ODU by virtue of their 1-1 record against the two teams; ODU is 1-2 against Hofstra and Mason)

The various five seed permutations all involve winning tonight, too. Winning out will assure the Dutchmen no worse than the no. 5 seed, since at 12-6 they’d have the tiebreaker over Madison (2-0) and ODU (1-0). In addition, beating Madison and going 2-1 in their final three games, coupled with one ODU loss, would assure the Dutchmen finish no lower than fifth.

A loss, though, and the Dutchmen will be no better than tied for sixth and likely alone in seventh. The CAA has been wacky this year, but hoping for a team to make up two or three spots in the standings over the final two games is probably too much to ask even in this league—especially since the Dutchmen would not have the tiebreaker over Mason, Drexel or Madison, the latter of which has beaten Mason and Drexel and would therefore have the advantage over Hofstra.

Of course, depending on how things shake out over the final 10 days of the season, finishing sixth or seventh might look more inviting than fourth or fifth. But those permutations are for another time. Let’s not let the goofy fun provided by tiebreaker possibilities overshadow what should be a nail-biter tonight.

Seeding impact aside, this is another statement game for the Dutchmen—another chance to build momentum and confidence as well as make a case for themselves as one of the most dangerous teams in the league heading into the tournament. It’ll be interesting to see if the Dutchmen can come out with the same type of intensity they displayed from the opening tap against Old Dominion. And I’ve got a hunch Charles Jenkins and Nathaniel Lester will need to be complemented by an eight- or 10-point effort from one of the Dutchmen’s senior post players: Darren Townes, Arminas Urbutis or Dane Johnson.

The resurgence of Madison—which has locked up its first .500 or better finish in the league since 1999-2000—under first-year coach Matt Brady has been remarkable, especially given the multiple extended absences of star Juwann James. Madison’s 10-man rotation doesn’t feature a player taller than 6-foot-8, but its resourceful and efficient offense—four players are averaging in double figures for the Dukes, who rank third in the CAA in field goal percentage and tied for first in 3-point field goal percentage—makes for a compelling strength vs. strength matchup. (Check out the JMU game preview from the Daily-News Record’s Dustin Dopirak here)

The magic numbers are 70 and 40. The Dukes are 3-7 when scoring less than 70 points and 14-3 when scoring more than 70 points. And the Dutchmen are 10-0 when shooting at least 40 percent from the field. Under 70 plus over 40 likely equals some legitimate talk about the four by this time tomorrow.

Email Jerry at defiantlydutch@yahoo.com. And join the Defiantly Dutch group at Facebook today!
Posted by Jerry Beach at 9:48 AM