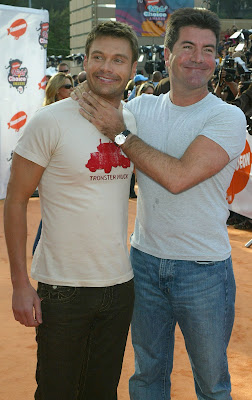 Neither one of these dorks will host Life of Corny.

My original plan Monday was to write about how reality shows are neither unscripted nor all that entertaining, especially compared to live sporting events in general and the Flying Dutchmen in particular. But it was rambling and non-sensical, even by my standards, so I scrapped it in favor of something centered around Tom Pecora’s new favorite term: Bipolar basketball.

And as it turned out, Litos had a much better analogy for the unpredictability of CAA teams anyway. Plinko! Did you sit home during snow and sick days as a kid, trying to will the plinko chip into the winning slot? Me too.

Plus, the concept of the Flying Dutchmen as a reality show was centered around a player who didn’t score a point Saturday. That said, though, the wife and I spent too much time marveling over the idea to let it go to waste. So whether it’s called Life of Corny or Rock of Vines or something else entirely, someone somewhere has to create a reality TV show around Cornelius Vines.

Never mind the interesting back story (Vines was born and raised in upstate New York and went to junior college in Iowa), the edgy, emotional nature that coaches alternately love and loathe and the all-or-nothing shooting touch, all of which lend themselves well to the reality format. Vines needs a reality show for Saturday alone, when he provided 13 episodes worth of drama in 13 minutes.

In the first half, he sprained his ankle, committed a foolish-looking foul that got him yanked, got tended to by the training staff, re-entered the game and committed turnovers on consecutive possessions in the final two minutes to get yanked and earn himself from Tom Pecora a withering looks that kill glare that seemed to indicate he wouldn’t see the court again until tonight at the earliest.

But the MSG cameras captured Pecora encouraging Vines in the locker room at halftime and imploring him to shoot the ball in the second half. Vines began the second half riding an exercise bike and out of sight of most fans, leading my wife to wonder if he’d been kicked off the team and had begun walking home to Syracuse, but he re-appeared on the sideline and re-entered the game when Charles Jenkins picked up his fourth foul with just four minutes gone.

This guy is crazy entertaining—easy for me to say, I’m not his coach—and that’s when he doesn’t score a single point. Imagine the must see TV he’d create when he’s draining multiple threes. Make this happen, Hollywood. Or at least Hofstra Television.

Other bits and bytes:

—Did you hear the appreciative applause every time Zygis Sestakos entered the game Saturday and the roar every time he touched the ball? He’s the closest thing Hofstra’s had in some time to an authentic fan favorite. Oh sure, everyone loves Speedy Claxton and Loren Stokes, but other than walk-ons, I can’t remember the last underdog player whom the fans embraced like this.

This can’t be an easy season for Sestakos, who started 25 of 32 games and averaged nearly 28 minutes per night as a sophomore but has recorded eight DNPs this season, has played a minute or less in three other games and is the only scholarship player without a start. But the warm reception bestowed upon Sestakos are an acknowledgment of the inherent challenges of his job as the designated 3-point shooter who rarely gets the opportunity to break a sweat and get into the flow and an appreciation of his willingness to accept his role with minimal complaint. Nice to hear.

—Fun fact: The Arminas Urbutis-Darren Townes-Nathaniel Lester-Greg Johnson-Charles Jenkins lineup made its sixth straight start Saturday, tying it with Townes-Jenkins-Vines-Miklos Szabo-Tony Dennison for the most starts by a quintet this season. Both lineups are 4-2. And considering that the current arrangement worked pretty well Saturday, my guess is that lineup will take the season lead tonight.

The Dutchmen have used eight different starting lineup combinations, four of which have taken the court together in at least three games. The rundown:

—Fun fact, part II: The only players to score for the Dutchmen during Jenkins’ nine-minute sabbatical in the second half Saturday were sophomores—Lester scored 13 and Greg Washington added four. That’s an encouraging development for the Dutchmen in both the long- and short-term.

—The CAA Zone is back, right before the arrival of mass anarchy.

—Delayed response to a question posed by Litos, who implored us all to get here, get here if we can last Friday: “Get Here” is by Oleta Adams. It was a big song in the winter of 1990-91, way back when I was a high school senior and penning a newsletter called Remarkably Red Raider. The song was considered one of the anthems for families with loved ones fighting in the Gulf War, and eventually peaked at no. 4 on the Billboard charts. I’m only mildly ashamed to admit almost all of that came off the top of my head.

—The Hofstra-Fairfield Bracket Buster game will be on ESPN360.com. Great news for those of us stuck with Cablevision! But hey at least we can get local news and weather, right?

—Hey, there’s a game tonight, isn’t there? ODU is pretty bipolar itself and this game looked a lot more winnable two weeks ago, before the Monarchs started picking off teams ahead of them in the standings. 6-foot-10 Gerald Lee has turned into a beast (22.0 ppg during the Monarchs’ four-game winning streak), which means Tom Pecora will need to coax another collectively impressive game out of Urbutis, Townes and Washington. The re-appearance of Dane Johnson would come in handy tonight.

We should have learned by now the dangers of trying to project more than 40 minutes ahead, but a win here—in the only game of the season between Hofstra and ODU, viva la unbalanced schedule!—and the Dutchmen could suddenly be in pretty good shape with an increasingly friendly schedule over the rest of the month. Litos expects Hofstra’s better guard play to be the difference and for Life of Corny to have a good episode, but he’s also a reverse lock when it comes to picking against ODU. Hey, he’s due!

Either way, we’ll be there, expecting to see another Hofstra-ODU game that goes down to the final seconds. I’ll be the guy re-enacting Aurimas Kieza’s buzzer-beater three seasons ago. (Warning: Not for those susceptible to motion sickness)

Email Jerry at defiantlydutch@yahoo.com. And join the Defiantly Dutch group at Facebook today!
Posted by Jerry Beach at 5:17 PM