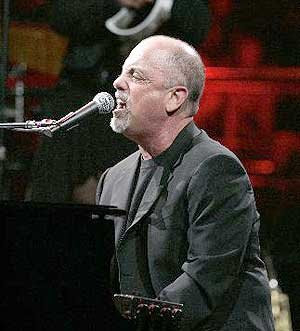 It's true. Long Island's most famous citizen had the 2008-09 Flying Dutchmen basketball team in mind when he wrote "I Go To Extremes" 20 years ago.
Imagine if there was a Hofstra fan out who was disgusted by the Flying Dutchmen’s latest dip and decided the sudden outage at the CAA Zone Friday was a sign to take a deep breath and neither read nor watch the Dutchmen—not even with the Dutchmen at home playing a televised game Saturday—until the boards were back.

Said Hofstra fan would have returned to us and the land of the obsessed Monday, and I wonder what he would have thought around 9 p.m. last night, after he watched the Flying Dutchmen defeat Old Dominion, 60-51. He’d probably feel like a guy who went to sleep with zombies ruling the world and woke up to see that everything was completely back to normal. You know, like my planned interpretative remake of my favorite “B” movie of all-time, Night of the Comet.

The Dutchmen, a week removed from a zombie-like performance against George Mason, made a far more favorable impression in their encore ESPNU appearance. A team prone to slow starts and ebbing confidence never trailed against ODU, which entered the game as the hottest team in the CAA. Considering the caliber of opponent and the importance of the game in the CAA standings, this was the most crisp, concise, complete and…umm…I can’t think of a synonym for satisfying that begins with a “c”…victory in a season filled with extremes.

Townes set the energetic tone on both sides of the ball by forcing a held ball following ODU’s first miss of the game, hitting the first basket of the game for the Dutchmen and celebrating it by racing down the court and pounding his chest. The Dutchmen never lost that momentum as they maintained a two-possession lead for the final 30 minutes. Old Dominion’s most sustained rallies were a pair of 5-0 spurts, both of which occurred in the first 13 minutes.

The Dutchmen limited Old Dominion to 27.5 percent shooting—the second-worst performance by a Dutchmen opponent this season behind Fordham (26.3 percent)—and impressively executed the defensive game plan by collapsing upon the Monarchs’ big men and either forcing them into bad shots under the basket or rejecting them entirely. The six Monarchs who stand at least 6-foot-5 shot a combined 31 percent (16-of-52). Gerald Lee scored 20 points, just under the 22 he averaged during ODU’s four-game winning streak, but he was just 7-of-19 shooting.

Seven players had at least one block for the Dutchmen, who finished with 13 blocks, one shy of the team record. Of the players who saw at least 10 minutes of action, only Zygis Sestakos didn’t record a block, but even he got a piece of an errant jumper by Lee early in the second half. In addition, the Dutchmen out-rebounded the Monarchs 49-38.

The Dutchmen didn’t produce a thing of beauty on offense: They shot 38.5 percent, just above their incoming average of 37.8 percent, but something is going right when they can win on a night in which Jenkins is just 5-of-15 from the field and Greg Johnson commits seven turnovers.
And that something was the type of scoring balance Tom Pecora has been seeking. Five players scored at least seven points, the first time that’s happened since before the New Year (six players scored at least seven points against New Hampshire Dec. 27).

Lester scored in double figures for the fifth time in six games and appears to have arrived as an offensive weapon, but if the re-emergence of Townes and/or Sestakos—who played through a 102-degree fever and shot 3-of-5 from long distance, including a 3-pointer he drained immediately after the Monarchs closed within four points for the only time in the second half—is legitimate, then the Dutchmen suddenly have the type of offense that can complement a stout defense.

They may also finally have an established rotation. Three days after nobody played 30 minutes, four guys logged at least 30 minutes. The Dutchmen are 5-2 with the starting lineup of Townes, Jenkins, Lester, Greg Johnson and Arminas Urbutis. Sestakos may be taking on the designated gunslinger role previously filled by Life With Corny (Vines was in uniform but didn’t play and seemed to be favoring his left ankle whenever he stood up). Washington continues to provide valuable relief down low and even Dane Johnson (10 minutes Tuesday, his most action in five games) contributed.

Versatile offense, stout defense, established rotation. Who are these guys and where have they been all year? More importantly, can they stick around for another month—especially if Northeastern and VCU beat Drexel and James Madison tonight to create a four-way tie for fourth place and give the Dutchmen a chance to shape their own destiny over the final four games of the regular season? Hang on. The ride may just be beginning.

Email Jerry at defiantlydutch@yahoo.com. And join the Defiantly Dutch group at Facebook today!
Posted by Jerry Beach at 4:54 AM