Will the second time around the CBI be better for the Dutchmen? 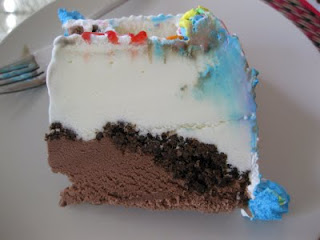 Don't make me regret gorging on the CBI again, Dutchmen!!!

All you need to do is take one look at my waistline to know I lack willpower. But my resistance is just as poor away from the dinner table too, as evidenced this week when I embraced the idea of playing in the CBI with the type of enthusiasm I usually reserve only for a dinner of chicken parm and Carvel cake. (But honey I’m almost HALFWAY to my birthday!)

I did this last year, too, and on The Morning After felt so awful and so bloated and so regretful I swore I’d never do it again, and asked my loyal readers to smack me upside the head (figuratively speaking) if I started pining for a non-NIT bid at any point in the future.

Which, of course, I started doing about as soon as the Flying Dutchmen lost to Old Dominion in the CAA semifinals. My thinking, even before the NIT field filled up with mid-major regular season champions that lost in their conference tournaments, was that I’d rather see the Dutchmen have a shot at hosting (and winning) a few games at home and maybe even win the whole thing in the CBI or CIT rather than have to fly to some BCS school and put up with BCS Bias and, probably, lose a first-round game.

Alas, now that the postseason is here and Hofstra is once again in the CBI, I find myself hoping I’m not sitting here, a couple hours or a few days from now, wishing I hadn’t gotten what I’d hoped for.

Part of it is the urgency of the postseason. One more loss and it is really, truly, finally all over for Jenkins, Greg Washington and Brad Kelleher. One more loss and we have to start gazing at the calendar and willing October to get here. The senses and nerves are heightened, the margin for error officially gone. Now that what we wanted is here, we’re nervous. Makes sense.

We’re also nervous because the Dutchmen will hit the road for at least the first round (and likely the second, if they get that far) and will tip off in Evansville tonight a mere 44 or so hours after they found out their destination, barely 24 hours after flying out of New York and less than 18 hours after bussing (yes, bussing) to Evansville from Nashville. That’s a lot of traveling and not a whole lot of preparation in a short period of time, but Mo Cassara said yesterday he was confident the Dutchmen could rely today and tonight on the lessons they learned during this season’s challenging road trips.

“I think so much of today and really into tonight and traveling is more about us getting our mental frame of mind kind of in line,” Cassara said. “It’s much more about us, about our energy and our overall effort and our attitude and then our execution.

“I think as disappointing as the result was at Wright State, it’s a good learning tool for this trip. Another challenging trip to the Midwest against a very hard-nosed, tough Evansville team. In Wright State we know we didn’t play very well and we weren’t as prepared as we thought, so we can use that as a measuring stick going out to Evansville.”

Also a cause for concern: That the disappointment over missing the NIT will impact the Dutchmen once they get on to the court of the played-in-obscurity-at-a-Division-II gym CBI. That disappointment—among fans and, particularly, the players and staff—was higher than I expected. I think most of us were resigned to missing the NIT, but VCU squeezing into the field gave us all hope, however short-sustained, that the NIT couldn’t possibly fail to invite the highest non-NCAA Tournament qualifier in a great mid-major. Nope. It’s the NCAA. It can screw up anything. (This is the first time since 2000 the CAA has not sent a team to the NIT, by the way)

Cassara was as unhappy as anyone that the Dutchmen didn’t get an NIT invite, but during a 20-minute meeting yesterday he reminded the Dutchmen to take—warning! pun ahead!—pride over how far they have come in five months and in the opportunity to keep playing, both for themselves and for the graduating seniors as well as the university.

“I wrote two dates on the board: One was Oct. 15, the other was today,” Cassara said. “And I drew a line in between. I said ‘Think of this journey, going from this date to that date.’ I think, if we said on the first date that we’d be 21-11 and finish tied for second in the CAA and playing in the postseason, we’d be pretty happy. So let’s go play our butts off and have some fun, because we deserve to be in this position for all the hard work we put in along this journey.”

For whatever reason, the Dutchmen did not seem happy to be there a year ago tomorrow night, when IUPUI never trailed in a 74-60 rout. Those memories are hard to shake for the 27 of us who were in the stands and who walked out figuring it would have been better to put away the basketballs after a frantic rally in the second half of the season ended with the double overtime loss to Northeastern in the CAA quarterfinals.

In addition, Jenkins, Washington and Kelleher remember how last year ended—though only Jenkins played in the game, Washington was out with an ankle injury and Kelleher was in NCAA purgatory—and don’t want history to repeat itself.

“I talked to Charles and to Greg about the postseason experience from last year and obviously it wasn’t one that they like to talk about or are real proud of,” Cassara said. “I said ‘Let’s not make that happen again.’ As I say all the time: If we do what we’re supposed to do and execute our game plan and have the right mental approach and play hard, winning will take care of itself.”

The Dutchmen’s “Why not us?” mantra didn’t translate into the CAA title that everyone so desperately wanted, but it could work here, even “Why not us?” doesn’t resonate quite as well in the CBI. There’s 140 teams participating in postseason basketball and only four will win their last game. Why can’t the Dutchmen be one of those, make this CBI experience as pleasant and as last year’s was disastrous and give the program a building block for years to come?

“We’re pretty upset we didn’t get a bid to the NIT, but we’ve got our second wind,” Kelleher said. “We really want to go out and win this tournament…look at VCU last year: They won this thing and now they’re in the NCAAs.”

“The seniors, I told them it’s their last tournament and last go-around, play as hard as you can and give everything you can to this team and to the program,” Cassara said. “Because I think [their] effort and attitude will help move this program forward. And hopefully we’re playing in the postseason in a different tournament in years to come.”