It’s the son of CBI Craziness! 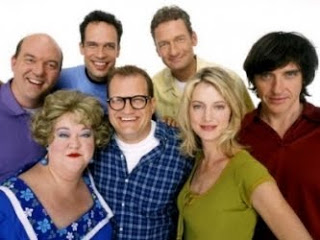 CBI Craziness: The only thing less obscure than the final season of The Drew Carey Show!

Because it worked so well last time! That’s right, like episodes of The Drew Carey Show airing on ABC in the summer of 2004, you can’t kill CBI Craziness (subhead: The world’s biggest—and only—CBI pool!), you can just hope it airs in obscurity!

I really wasn’t going to unveil a second edition of CBI Craziness, because, duh, I hoped Hofstra would be playing in another tournament and last year’s CBI experience was such a lousy one for the Flying Dutchmen and their 17 fans who went to the game against IUPUI that I didn’t even officially congratulate our winner. But that lucky man, VCUPav, asked me last night (surely in jest) if he could defend his title and that was all I needed to get the band back and do it again!

Rules are simple, or as simple as can be for a tournament that is freaking reseeded for the semifinals and whose champion is determined in a best-of-three series. Check out the CBI bracket here and pick ONLY the first two rounds and your champion today. We will pick the semifinals and finals once those matchups are announced. So your picks should look something like this:

FIRST ROUND
James Madison over Davidson
Creighton over San Jose State
Montana over Duquesne
Weber State over Oregon
Boise State over Austin Peay
Hofstra over Evansville
Rhode Island over Miami (OH)
St. Bonaventure over Central Florida
SECOND ROUND
James Madison over Creighton
Weber State over Montana
Hofstra over Boise State
Rhode Island over St. Bonaventure
CHAMPION
Hofstra (duh)
Scoring system: One point per correct first round game, two points per correct second round game, four points per correct semifinal game and eight points for picking the champion. If your ORIGINAL pick as champion wins it all, you get a 16-point bonus. Oh boy!
Tiebreakers are simple: Pick the number of games in the CBI championship series as well as predict the CAA’s record in the NCAA Tournament.
As always, send me your picks via email (defiantlydutch@yahoo.com) or by DM on Twitter (@defiantlydutch). And as always, the winner gets two Hofstra football season tickets, as well as another prize I may or may not ever find and may or may not ever mail out!
If you’re uncertain about whether or not to join, consider the plight of VCUPav. He participated last year and now his favorite team is in the NCAA Tournament! PEOPLE REALLY WIN AT DEFIANTLY DUTCH!
Deadline is tonight at 8 p.m. Yeah I know the first games are at 7 p.m. Like the tournament we are betting on, this is not very well-organized at all. Tell your friends! Let’s get more than the 26 people we had last year! And ignore them when they laugh at you.
Email Jerry at defiantlydutch@yahoo.com or follow Defiantly Dutch at http://twitter.com/defiantlydutch.
Posted by Jerry Beach at 2:37 PM

Winner: Hofstra; after the tournament they rename it the CJI (Charles Jenkins Invitational)