Greetings Defiantly Dutch Fans! My name is Gary Moore, and I am the author of the blog The College Hardwood. This is my sixth year covering the CAA Tournament for my blog. Jerry and I thought it would be a great time again to do our second annual blog swap. Our first blog swap was at the same time last year.

I have to give Jerry credit for the idea for today's story. As most of you know, Towson went through the entire CAA regular season winless. 0-18. No CAA team had ever gone through the regular season winless in conference till the Tigers accomplished it this season. Jerry thought it would be a great idea if someone could write a story about sitting in the Towson student section behind their basket during their first round CAA Tournament. Since Jerry wasn't going to be down here at Richmond until Friday evening and I was going to be there for the afternoon session, I offered to write the story.

The first concern I had when I got to the Richmond Coliseum around noon time was would I be able to sit in the Towson student section. As I sat in my seats in Section 31L for the UNCW-Georgia State game, I would find out very quickly the answer. Tieff and I became friendly with one of the fans sitting in the row in front of us, Tom, a very knowledgeable East Carolina fan who loves college basketball. It turns out that Tom knows Rob Goodman, who works for the CAA and who just happened to come by to say hi to Tom.

I introduced myself to Rob and told him about my blog and that I wanted to write a story about sitting in the Towson student section and what it was like rooting for the Tigers today. He kindly told me that the CAA has a strict policy that only students of that school can sit in the designated student section. But Rob was kind enough to say that I could interview Towson students for the article. That certainly worked for me. Hopefully there would be Towson students to interview.

I went down and talk to the security attendant at the end of the aisle to let him know I wanted to interview the students. Before I could finish, one of the students in a black Towson shirt came up near me. I got his attention and asked if he and his friends would be interested in being interviewed. The student, Randy replied that he had to go somewhere first, but he told me that he would be glad to talk to me. 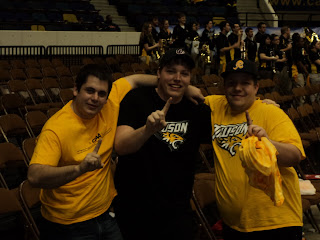 Sure enough, he came back to his seat and motioned me to come over. Randy introduced me to his friends Drew and Eric. Randy, Drew and Eric are all seniors at Towson and have gone to the NCAA Tournament every year that they have been at Towson. Drew stated to me that there wasn't enough student interest for the school to pay for a bus to bring students down to Richmond. So Randy, Drew and Eric all drove down together. As Drew said to me, "This is my school, so I have to show my support.”

I asked them about how the season has been for them. They commented that they had played a lot of close games and that beating LaSalle (an A-10 team) was the highlight of the season. And they are correct, coming into the game, twelve of the Tigers twenty five losses were by six points or less, including nine games in conference.

I asked them who their favorite player was on the team. Both Drew and Randy said Isaiah Philmore, who has led the Tigers in scoring. Eric said Brian Morris due to his commitment on defense. I then asked them if Towson won against Drexel, would they rush the court. They all laughed and one of them commented they hadn't thought about it. I believe it was Drew who said he would like to be back for tomorrow's game, so he didn't want to get thrown out. But if I could assure them they had the CAA's permission, they would do it (later I asked Rob Goodman about it and it gave him a good chuckle). 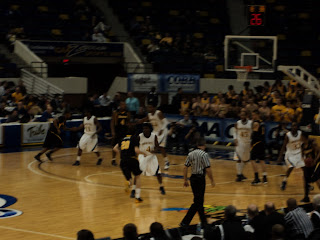 I thanked them for their time, told them I had my Tiger towel that I purchased at the souvenir stand and that I was rooting for their team. Then I took a picture of three and went back to my seats. After that interview, I really wanted Towson to win. Towson definitely did have a chance against Drexel. Despite losing both games to the Dragons, the Tigers could have won both games. Towson lost at Drexel by six points, and then lost at home to the Dragons by three points.

And knowing they could beat the Dragons, with the support of the Towson band, cheerleaders, dance team and Drew, Randy and Eric, the Tigers came out inspired. Nine minutes into the game, Towson was up 11-7 on Drexel, much to the approval of their support behind their basket. 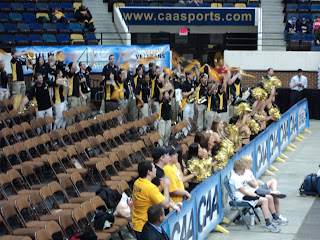 But the fifth seeded Dragons, a team that had upset Louisville on the Cardinals home court earlier in the season, would rally in typical Drexel style, scoring inside and Chris Fouch outside shooting. Dartaye Ruffin, Samme Givens and Fouch combined to score 11 points during the Dragons' 13-1 run. Drexel was up 20-12 with 6:41 left and seemed to be ready to blow the Tigers out of the Richmond Coliseum.

But Towson responded with a run of its own. In a little more than four minutes, the Tigers outscored the Dragons 14-3. Rashawn Polk's two foul shots gave Towson a 26-23 lead with 2:27 left in the first half. Drexel would end up tying the score and the game would go to the half at 28 all. 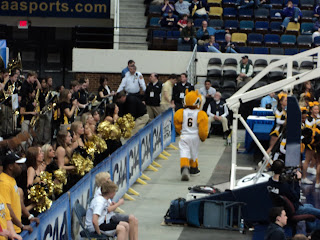 While Josh Brown and Rashawn Polk did most of the scoring in the first half, the Tigers needed to get Philmore, their season leading scorer, going as he only had four points in the first twenty minutes. And sure enough, Towson got the ball to Philmore who scored five of the Tigers' first seven points.

The problem was during this time, the Dragons were putting a serious run on the Tigers thanks to the inside presence of Givens. Drexel outscored Towson 22-9 over the first eight minutes of the second half as Givens scored eight of those points. The Tigers had no answer for Givens post moves as the Tigers' Braxton Dupree picked up his third and fourth fouls not even three minutes into the second half. Drexel was up 50-37 with twelve minutes left in the game. 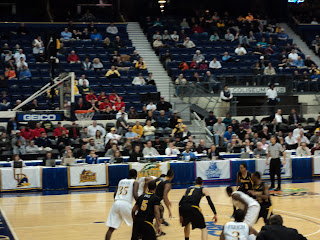 The lead remained between twelve and thirteen points for the next six minutes. The score was 60-48 with a little over six minutes left in the game. At that point, the fans in my section and myself thought the game was over, figuring Drexel's defense would be too much for Towson to overcome. But Randy, Drew and Eric, along with the dance team and the Tiger Mascot continued to cheer their team on.

And perhaps due to that support and the Tiger Pep Band's great version of Frankenstein, the Tigers seemingly rose from the grave. Over the next three minutes, led by Brown and Polk, the Tigers outscored the Dragons 14-4. Polk's three pointer capped the run and Drexel's lead was only two, 64-62 with 3:15 left, much to the chagrin of the always animated Bruiser Flint.

The band, the dance team and the three friends cheered loudly and they had the support of the rest of the Richmond Coliseum sans the Drexel fans. As they implored "DE-FENSE", the Tigers' played tough defense at Drexel's end. But as the shot clock neared zero, Gerald Colds launched a long three point attempt and it hit nothing but net. The Dragons had the momentum back and led by seven, 72-65 with one minute left.

But again Towson's support didn't give up on the Tigers and with some help from the Dragons' Dartaye Ruffin missing four free throws (and missing would be a kind word for his free throw attempts), the Tigers crept back into the game. With the score 72-69, Josh Brown had a chance to cut to the lead to one with a layup attempt. But despite it looking like he was fouled, Brown missed. Drexel would hold on and win 75-69.

The Tigers played so hard as a team and gave it everything they had, but again they couldn't get over the hump and get a win. There would be no miracle upset, no rushing the court. But the Tigers showed heart and gave their supporters every reason to believe they would win.

As the Tigers left the court, there was Randy, Drew and Eric by the gate, high fiving the Tigers' players, thanking them for their inspired play against a now 21 win team. The three friends who share a love of Towson college basketball never wavered for their support of their team. As Kyle Whelliston would say, Towson's season ended with loss. But their season never ended without support. Especially from three soon to be graduating students named Randy, Eric and Drew.