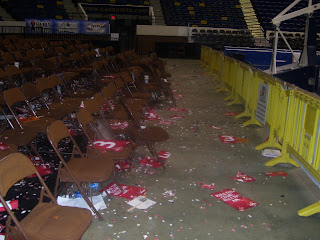 It happened Sunday afternoon, for the 10th straight season and the 32nd time in 37 years since Hofstra joined the East Coast Conference. Getting knocked out of a conference tournament, instead of winning it all and reaching the NCAA Tournament (with the exception of 1994, of course), is as much a part of late winter and early spring for Flying Dutchmen fans as paying taxes.

When something happens 86 percent of the time, it shouldn’t be surprising, and it shouldn’t sting, throb, hurt or leave us feeling empty. But damn, did the Flying Dutchmen’s 77-69 loss to Old Dominion in the CAA semifinals Sunday sting. It throbbed like a toothache, hurt like an ankle sprain and left us with the type of empty feeling usually associated with lost teenage loves. She did WHAT with HIM? We lost to THEM?

That’s no knock on Old Dominion, which proved to be a worthy CAA champion by first throttling VCU and then hanging on to edge the Rams, 70-65, Monday for their second straight title. But when something is meant to be, and doesn’t happen, well, logic goes out the window and you end up making a mix tape (Google it DC!) of Pearl Jam, Expose, Boyz II Men and Del Amitri. Or something like that.

The end of the CAA tournament really is like a breakup you never saw coming, even if some of the signs should have been visible. As great as Jenkins is, was this really a team that could win the CAA Tournament? With three first-year starters and no depth? Stephen Nwaukoni, who played 10 minutes in the Dutchmen’s previous three games, was forced into 22 minutes of action Sunday when Greg Washington got into early foul trouble (worst refereeing ever, or at least since VCU-Drexel).

Counting last weekend’s games, the Dutchmen were 15-5 in CAA play this year, but only 1-4 against fellow bye teams George Mason, Old Dominion and VCU. In a tournament in which midnight arrives for Cinderella long before the final buzzer—the last time it didn’t, Cassara was still in college and Hofstra was playing an independent schedule—it was probably too much to expect the Dutchmen to knock off the two top seeds, or the two seed and the team that gets to play at home every March.

Realistically, we got so much more than we could have expected out of this season. If we were told last May, or last October, that the Dutchmen would reach the CAA semifinals, give the eventual champion all it could handle in defeat and likely head for an alphabet soup tournament, we would have done cartwheels and stocked up on the Campbell’s.

But the Flying Dutchmen exceeded expectations, and in such dramatic and incredible fashion, that I absolutely believed, as sure as my last name is Beach, that I would spend Monday crafting the post I’ve had in mind for three years, the one about how it feels to have OUR TEAM playing for the CAA championship, with the nation’s eyes upon us, and wondering how to bide our time between Cracker Barrel breakfast and 7 p.m.

Maybe I’d convince Cassara to let me write a behind-the-scenes story about the entire day, or maybe my wife and I would camp out in front of the Richmond Coliseum waiting for the doors to open and for wet spots to develop on the court. Would I wear both old and yellowed Hofstra basketball T-shirts I save only for special occasions, or just the 1994 Midnight Madness one? 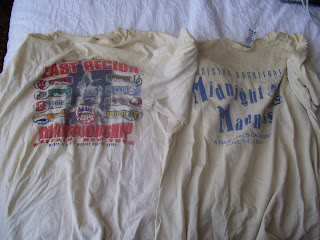 Wait 'til next year, wrinkled and yellowed shirts.

I was sure the Dutchmen would be in control for most of the final, and that the last and defining scene of the weekend would be Charles Jenkins draining a pair of free throws to ice a win over George Mason (or anyone, really, I didn’t care), and Mason (or whomever) frantically dribbling up the court and hoisting a meaningless shot as time expires. The Lions Den would come spilling out from behind Hofstra’s basket and the “adults” in the audience would all lose our freaking minds, hugging and kissing and screaming and not entirely sure if we were laughing or crying or some combination thereof. I would break Twitter with an orgasmic burst of nonsense, and “Decadence Dance” would play hundreds of times as we rode home, our feet never touching the ground.

Instead, we spent Sunday drowning ourselves in comfort food—girl scout cookies in the hotel room and appetizers at T. Miller’s, thanks @NUHF!—before I fell asleep earlier than I have since high school, which meant I at least had a good night’s rest for the drive home Monday. The T-shirts were packed in my backpack, to be buried in the back of my bureau until this time next year. We hit an inexplicable traffic jam south of Baltimore, which cost us any chance we had of catching the entire ODU-VCU game at home, and I didn’t care.

I groused about southern bias and horsecrap refs (not only did Jenkins not hit the winning free throws, he didn’t even TAKE a free throw despite 11 shot attempts inside the 3-point line, NOOOOO, there’s no Southern bias) and the need for a new conference. My wife, always the sane and rational one, said that maybe we were the San Francisco Giants of the CAA, destined to suffer decades of heartbreak until an unexpected and life-affirming championship (she came up with this analogy because she listens to Mad Dog Radio every day on her way to and from work—did I marry up or what?), until she lost patience and said if I was in such a rush to get to the A-10 or back to the America East, I could always root for Fordham or Stony Brook.

The postmortems the last two years weren’t nearly this bitter. As I noted last year at this time, the weekend of the 2009 CAA Tournament was the last weekend my Mom was alive, and Hofstra basketball had provided my wife and I a wonderful diversion during the worst period of our lives.

Losing a classic double overtime game to Northeastern last year was a rough way to go out, but it was hard to play the what-if game when Matt Janning simply refused to allow the Huskies to lose. Considering the Dutchmen started 2-7 in CAA play and finished 10-8, it was a season that was more about the Journey than the destination.

We could take that mature viewpoint because we had another year of Jenkins, who would be joined in this season’s starting lineup by two members of last year’s All-Rookie team as well as newcomer Mike Moore, who would replace Cornelius Vines. The destination would be better than the journey this year, that was for sure.

Except, of course, well, you know what happened. And suddenly it became about the journey again, at least until the C&C Music Factory (Charles and Cassara) began working their magic, and inspiring us all to believe the seemingly impossible was downright probable.

We SHOULD appreciate the journey, especially this year, and especially because the season was symbolized in the Old Dominion defeat. The Dutchmen trailed for the final 30 minutes Sunday, but were down by between six and 11 points throughout the second half. They limited the Monarchs to 13 offensive rebounds, were outrebounded by just seven (34-27) against the team that leads the nation in rebounding margin and surrendered 16 second-chance points.

The Dutchmen had 19 assists and just five turnovers and shot 44.6 percent, their best effort against Old Dominion in seven games (since a regular season rematch in February 2007). Five players scored in double figures, led by Jenkins’ 16 (albeit on 6-of-16 shooting, the same line he had Jan. 15). The Dutchmen played Old Dominion to a dead heat when Washington (5-of-6 shooting in perhaps his most inspired outing of the season) was in the lineup.

In the regular season meeting, meanwhile, the Dutchmen were outrebounded 52-28, gave up 27 second-chance points, were outscored 75-53 after a game-opening 12-0 run and shot just 37.3 percent. Jenkins and Mike Moore scored 19 points apiece and the rest of the team scored just 26.

Old Dominion was clearly the better team two times this season, but the undermanned Dutchmen maximized their talent both times, adjusted the game plan for the rematch and gave an unrelenting effort throughout. What more could we ask for?

“I couldn’t be more proud of a group of guys and the team and the staff and of what they’ve done and accomplished,” Cassara said. “It’s a sad day because we wanted to keep playing and we felt we were really close tonight. We just couldn’t quite get over the hump. But for this team to finish tied for second in this league with Old Dominion, to win 21 games, to come out here and perform the way we did and compete, I’m just so proud of our team and our staff and everybody involved at Hofstra.”

Kyle Whelliston writes that it always ends with a loss, but a more accurate phrase, at least in the conference season, is that it always ends with a thud. It feels particularly abrupt this season, not only because of the faith we developed during the campaign but because we waited so long to watch the Dutchmen play two games in such a short period of time. We went 172 hours between the season finale against Delaware and the tournament opener against William & Mary, and then, within 18 hours, we went from reveling in the win over the Tribe and celebrating at Buffalo Wild Wings with fellow Hofstra fans to plotting a route home.

As is usually the case with matters of the heart, we are not nearly the only ones feeling this miserable, even if we think nobody else can understand what we’re going through. The truth is 232 other schools in the non-Big Six conferences will know exactly what we’re feeling, will endure long, grumpy rides or flights home, will spend this week cursing the fates and the refs and fill-in-the-blank bias and swearing they’ll never open themselves up like this again.

But by next week, of course, the healing process will begin, and by October, we’ll view these March losses as life experiences that toughened us up and once again visualize situations in which the Flying Dutchmen are dancing at center court at the Richmond Coliseum. The throbbing, stinging and aching will subside, and we will love again.

But right now? Right now I feel 19 again, except this time, I wish I were blind when I see Old Dominion championship T-shirts.