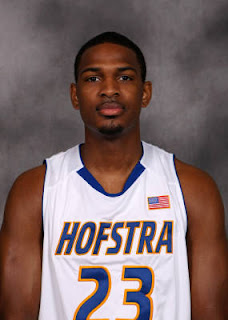 Few players in Connecticut history were ever as synonymous with high school playoff basketball as Mike Moore, who, in his final two seasons at Hillhouse in New Haven in 2005-06 and 2006-07, led the Academics to a 54-1 record and consecutive state championships.

Moore probably figured his postseason experiences in college would not be as bountiful, but the last thing he expected was to wait four years and two schools for his first legitimate opportunity to play basketball in March.

Officially, Moore has already played a Division I postseason game: He scored two points in four minutes in Fordham’s 80-62 loss to St. Joseph’s in the quarterfinals of the Atlantic 10 tournament Mar. 12, 2008. But for all intents and purposes, Moore—who transferred to Hofstra following the 2008-09 season after two seasons at Fordham—will finally get to experience the postseason Saturday, when he starts at guard as the Flying Dutchmen take on the winner of the Friday night first round game between James Madison-William & Mary.

“I think postseason play is where all basketball players dream of [playing], because it’s do or die—one and done, you don’t win, you go home,” Moore said. “This is definitely something I’ve been missing since high school.”

Ironically, in that it’s not ironic at all, the Dutchmen have been missing a player like Moore for just about as long. Antoine Agudio and Charles Jenkins formed a pretty good 1-2 tandem during Agudio’s senior season and Jenkins’ freshman campaign in 2007-08, but Jenkins had little consistent scoring help in each of the next two seasons.

Moore wasted little time this season in becoming the self-described Robin to Jenkins’ Batman. He averaged 15.1 points per game during the regular season, which made Jenkins and Moore the fifth-most productive duo in Division I (38.3 ppg). Moore has scored in double figures in 26 of 30 games, including his last nine in a row and 21 of his last 22 games overall. Nobody other than Jenkins scored in double figures as many as 20 times in either of the previous two seasons.

In fact, Moore already has already scored in double digits more by himself than any two players did in 2008-09 (Cornelius Vines 17, Nathaniel Lester and Tony Dennison six apiece). And if Moore scores at least 10 points in four more games this season, he’ll have more double figure games than any two players from last year (Chaz Williams 16, Vines 13).

While Moore was expected to provide the Dutchmen with a second outside threat (he shot 35.8 percent from 3-point land), he has most impressed Mo Cassara and staff with his all-around game. He has been impressively reliable at the free throw line, where Moore made 27 straight attempts from Dec. 29 through Jan. 15 and has hit 84.8 percent of his attempts overall, which is tied for ninth-best all-time at Hofstra.

Moore said he “can’t even tell you” how many shots he and Brad Kelleher hoisted while the Dutchmen were on the road last season—neither player could travel with the Dutchmen because of their ineligible status—and that the year off helped him focus at the free throw line.

Moore played a lot of power forward when the Dutchmen were forced to go small and has been as comfortable slashing and driving the lane as shooting from beyond the arc. He had three double-doubles, pulled down at least 10 rebounds in a game four times and finished tied for second on the Dutchmen with an average of 5.4 rebounds per game.

“In high school I was an all-around player,” said Moore, who played all five positions for Hillhouse as a senior. “I do what the team needs me to do. I can spot up, I can slash, I can do a little bit of everything.”

Moore’s demeanor has also been a vital part of the Dutchmen’s surprisingly successful season. Cassara has credited Moore for remaining calm and positive during comebacks from double-digit deficits against Northeastern and William & Mary—two of the seven victories this season in which the Dutchmen overcame double-digit holes—and for easily shrugging off a poor shot or a rough few minutes.

“He makes some bad plays to start the game and I’m yelling and screaming at him on the sideline and he just gives me the ‘I’m OK’ [look],” Cassara said after the Dutchmen came back from a seven-point second half deficit to beat UNC Wilmington at home Jan. 19. “I’m starting to learn to back off him. Leave him out there long enough, he’s a guy who can make some plays.”

Said Moore: “I think I have that fiery edge to me as well, but I just try not to let it affect me, just get on to the next play. I think that came with the years of basketball, just knowing that there’s another play. The game is 40 minutes, you can’t let what happens in the first five minutes affect you in the second half. So I just try to move on to the next and I try to tell that to the younger players—‘We’ll be all right.’”

That was the attitude Moore had last spring, when Tom Pecora, the coach who lured him from Fordham, went to Fordham. “You know, it was a bizarre irony—a lot of people asked me questions about that, but I think it all happens for a reason,” Moore said. “I wasn’t upset at all. Life is life. It happens. Just like I let Fordham, he left here. We all make decisions for the best interest of us and our family.”

“Playing basketball, you go through your ups and downs,” Moore said. “But hopefully I peak during this tournament.”

“This is what I transferred for—the opportunity to live the March Madness dream,” Moore said. “So far we’ve been successful and hopefully everything works out like I wanted it to, like I’d dreamed about, and we make it to the national tournament.”