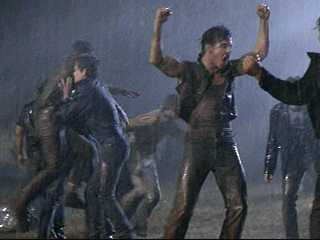 Me, above, after winning the rumble with Gary Moore at the muddy intramural fields across from Enterprise Hall!
Good afternoon and welcome to the first-ever HOFSTRA BLOG SWAP! Gary Moore of The College Hardwood and I will each pen a piece for the other’s blog this week as we get ready for the CAA Tournament. Gary, a veteran of CAA Tournament trips, will recap his experiences in Virginia and let you know what to expect if you’re heading to Richmond.
This caps an eventful year for Gary and I in our battle for Hofstra blog supremacy. See, we’re all very territorial here and we initially viewed each other as a threat. We’d give each other the stink eye from our seats at the Arena. I’d follow him out to his car and yell insults about his friend from Iona, then duck behind a snow bank so he didn’t see me. Soon after, I’d hear comments about how only a sissy fails to grab the free T-shirts flung in his direction.
Finally, we had enough and decided to determine the biggest blog on the block the way the kids did in 1967: With a rumble. But Gary’s an IT guy and I grew up in the middle of nowhere in northwestern Connecticut, where we only read about rumbles in S.E. Hinton books, so we couldn't figure out who would be the greasers from the wrong side of the tracks. Eventually we decided to forget the rumble and became friends. The end!
Hope you enjoy Gary’s entry today and please check out his blog later today or tomorrow for my piece on the history of the Flying Dutchmen in conference tournaments.

For those of you who don't know me, I write a blog called The College Hardwood, formerly MidMajorHoops.Net, which Jerry still links to on his blog by that name. It was started as an answer to a dare by two dear friends, Mal Galletta and Tony Terentieff (known to my readers as Tieff and Mal). They thought I knew a lot about college basketball and thought I should write about it.  My blog started in December 2005 in the midst of the greatest season in CAA history, the 2005-06 season.

And we learned immediately one thing about the Richmond Coliseum our first year of the tournament. If you are going to the Richmond Coliseum for the first time this weekend, pack a sweatshirt for each day you will be there, because it's cold. Freakin’ meat locker cold. I am convinced that there are so many low scoring games with teams not shooting well due to it being so cold in the arena that you need time to warm up. And I truly think this leads to some of the upsets, especially for teams that have first round byes facing decent teams in the second round.

As noted Buffalo Wild Wings is a good place to go and catch other tournaments being played.  And they get every tournament feed, including the MAAC Women's championship game which occurs Sunday morning (they open at 11 am on Sundays).

What is the CAA Tournament Catchphrase? Well in the past, it was "Jammin on the James" or "CAA, Fun for the Crowd", which was a turned into a very hokey yet catchy song. There's also “Let’s Go Krogering,” which is for Kroger, a regional supermarket that is a main tournament advertiser.  "Let's Go Krogering" may be perhaps the dumbest promotional line I ever heard.

We also unfortunately learned as we listened to the local radio station covering the tournament, Sports Radio 910, that there truly is a Virginia bias. During their morning broadcast from the Richmond Coliseum, the hosts went through all the teams that had a chance to win the tournament. Not one non-Virginia school was mentioned. I remember Tieff just going off on that.

2008 was not much better than 2007 from a Hofstra perspective.  Tieff and I just went that year and for the first session, it was just me. Tieff had an important meeting on Friday, thus I drove down alone to Richmond in a rain storm and barely made it there before Hofstra's noon game on Friday vs. Towson. It was quite possibly one of the worst games I ever saw Hofstra play. The Dutchmen scored just 13 first half points and lost 81-66. I picked up Tieff that night from Richmond Airport and filled him in on all the gory details.

However, the 2008 CAA Tournament did bring one magical moment. In the first semifinal on Sunday, William and Mary took on defending CAA champ and #1 seed VCU. When then Rams coach Anthony Grant walked in, he was greeted like a rock star from the crowd and it seemed like the Tribe didn't have a chance. But W&M played perhaps the greatest game in program history and upset VCU in front of all the Rams faithful 58-56.