CBI Bits and Bytes: Whose season gets Scrubbed tonight? 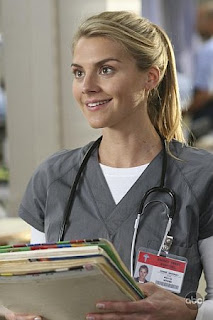 Denise the hot intern, above, smiles despite preparing to deliver bad news to her castmates as well as one of the two teams playing tonight at Hofstra Arena.

“What we did last night was we had two guys waiting at Hoop One Video [in New Jersey]—they were sitting in the car, two of our managers,” Pecora said. “As soon as we knew it was IUPUI, we called them at midnight. They got us three tapes and they drove back, got back here about two o’clock.

Pecora said the plan was to produce a scouting report for the Dutchmen in time for practice Tuesday. “So for the kids, it’s business as usual,” Pecora said. “We’re usually ahead of the curve a little bit more.”

—Hofstra and IUPUI have never played each other and IUPUI has played just two CAA opponents in its 13 seasons as a Division I program. The closest connection Hofstra has to IUPUI is a thin one indeed: IUPUI plays in the Summit League, which used to be known as the Mid-Continent Conference, which in turn took in the rest of the old East Coast Conference (Buffalo, Central Connecticut, Chicago State, Northeastern Illinois and Troy State) after the ECC finally broke apart for good in 1994.

Yet is anyone surprised that Pecora, who seems to know and get along with everyone in Division I (well, except this guy), is friends with IUPUI coach Ron Hunter and exchanged texts with him late Sunday night?

Pecora and Hunter have worked together on CBS College Sports’ coverage of the NCAA Tournament and will do so again this weekend. “He texted me ‘Wow, what are the chances of us playing? Now I’ll have to buy you dinner,’” Pecora said, “Because I usually buy him dinner when he comes in to do the TV work. My response was ‘Laughed when I heard. I’ll pick you up Friday morning.’”

Judging by Hunter’s biography on the IUPUI website—which states, in part, “…Hunter has made strong defense, excellent guard play and local recruiting three of his fortes”—he and Pecora have plenty in common on the court, as well.

“I think it’s the same mid-major philosophy that you can get better guards than you can get forwards, so go out and try to play a three guard offense and you’re going to have better players on the floor,” Pecora said.

—Maybe the NCAA Tournament doesn’t take into account how a team fares in its last five or 10 games (snort), but the CBI does.

“It obviously played a role, there’s no doubt about that,” CBI spokesman Ray Cella said Monday of the impact of the Flying Dutchmen’s 8-2 finish. “That’s one of the things that everybody looks at, is the last five or last 10. They don’t admit it anymore, but they still do.”

Like with the CIT, Cella said the CBI is particularly interested in teams such as the Dutchmen, who have a young core returning next year and are eager to continue their season. “Obviously, the fact that they are a young team—even getting in two or three more practices can be helpful,” Cella said. “If they win their game on Wednesday and they continue to play, obviously, not only does it give you more opportunities to be with the kids and [work on] what you need to work on, it also gives you a sense of what the postseason is about and to try to use that to leapfrog into the following season.

“Tulsa won the first year and then was able to parlay that into the last two years [an NCAA Tournament berth last year and an NIT appearance this year]. UTEP last year, look at the year they had. Any chance you get to keep playing, keep practicing and get a game environment is going to help you, especially if you’re a young team.”

—I’m probably the only person who finds the CBI and CIT analogous to Scrubs (yes, I can in fact tie anything at all into the show created by William & Mary graduate Bill Lawrence). Allow me to explain: Scrubs has been revived from the edge of cancellation numerous times. The CBI and CIT allow teams to extend a season that seemed finished after a loss in their conference tournaments. Not bad, right?

Anyway, Scrubs is probably airing its last LAST episode tonight, right in the middle of the Dutchmen’s game against IUPUI. Someone’s season will finally be cancelled tonight as well in an enticing matchup of strengths.

Hofstra ranks among the nation’s leaders in 3-point field goal percentage defense, IUPUI shoots almost 40 percent (39.2 percent) from beyond the arc. The Dutchmen pride (booooo) themselves on limiting teams to less than 40 percent shooting, the Jaguars shoot 51.1 percent, second-best in the country behind Syracuse. It took Tom Pecora until almost February to find a starting five that gelled, IUPUI has used the same starting five in every game this season.

The Jaguars’ three double-digit scorers (Robert Glenn, Alex Young and Leroy Nobles) are all 6-foot-5 or taller, which could present some matchup problems for the Dutchmen. Greg Washington and Miklos Szabo must stay out of foul trouble, particularly early in the first half, and Nathaniel Lester will have to emerge from the doghouse to put in some time at power forward.

If one of the Jags’ trio is held under 10 points, the Dutchmen should win. If not, the race to see whose season gets Scrubbed will go right to the wire and be too close to call. Either way, see you there. I’ll be the guy screaming how the Fordham, Seton Hall and St. John’s jobs are career suicide.