Projecting the perfect 10 and searching for the imperfect five 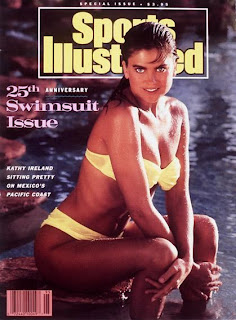 Sorry, but if you read the Sports Illustrated swimsuit issue for the articles in the late 1980s, Kathy Ireland is the perfect 10, not Bo Derek.
Absent in Wednesday’s post—i.e. lost in the aftermath of the wild ECC championship celebration Tuesday night—was the news I posted on Twitter before the party began: The Flying Dutchmen, by virtue of their win over Delaware and VCU’s win over Drexel, are locked into the seventh seed for the upcoming CAA Tournament. My guess is nobody’s ever clinched such a middle-of-the-road seed with two games to play, but even I’m not that warped to go and spend hours confirming it. I think.
Anyway, it is officially time to look ahead 15 days and to the Dutchmen’s potential opening round opponent (which, at this moment, would be Towson). So while everyone else is pondering six for four, we’ll begin breaking down five for 10. Below you’ll find a list of the teams fighting for the eighth through 12th seeds as well as their remaining schedules and how any current ties are broken.
8.) Georgia State (5-11): ODU, @Hofstra.
9.) UNC Wilmington (4-12): @Drexel, W&M. Seahawks the nine seed at the moment by virtue of 2-1 record vs. JMU and Towson.
10.) Towson (4-12): @W&M, Delaware. Tigers the 10 seed at the moment by virtue of 2-2 record vs. JMU and UNCW.
11.) James Madison (4-12): @VCU, Drexel. Dukes the 11 seed at the moment by virtue of 1-2 record vs. UNCW and Towson.
12.) Delaware (3-13): GMU, @Towson.
It’s crazy to try and predict how eight thru 12 will shake out, but if I had to guess I’d  bet that Towson splits its final two games to move out of 10th and that the Dutchmen play either UNC Wilmington or James Madison in the opening round. (Though skidding Drexel at James Madison in the finale screams potential upset) If those two teams tie at 4-14, UNC Wilmington would be the 10th seed by virtue of its head-to-head win over the Dukes.
As for the identity of the two seed, it’ll almost certainly the matchup we didn’t want against Northeastern or Old Dominion after our hopes for a quarterfinal rematch with George Mason all but disappeared when the suspension-wracked (snicker snicker snort snort) Patriots fell to William & Mary Tuesday.
William & Mary and Mason are tied for third, two games back of co-leaders Northeastern and Old Dominion, so one win apiece by the Huskies and Monarchs will cement for them a top-two seed. If the two teams finish the season tied, Northeastern is the one seed by virtue of its head-to-head win over Old Dominion.

If only there was a use for these skills and this information outside of my living room, I’d be king of the freakin’ world. Anyway, the research was fun and still left my question unanswered: At no point since 1993-94 (the official start of the Defiantly Dutch Era) has a team in a conference that Hofstra has occupied in that span ever climbed back to .500 after being as many as five games under. Whoohoo, more late-night digging to come!

The Flying Dutchmen appear to be in unchartered territory a little closer to home as well. The only Hofstra team to come back from four games under .500 to reach .500 in conference play was the 1988-89 team, which opened ECC play with a 2-6 mark but finished 7-7 and took eventual champion Bucknell to overtime in the tournament semifinals.

As for the CAA and America East, here is the raw data I found—the list of teams that were three and four games under .500 in the CAA or America East since 1993-94 who managed to reach .500 at some point. With the America East, I was originally going to go back to only 1994-95—Hofstra’s first year in what was then known as the NAC—but I was surprised nobody in the CAA had come back from five games under .500 so I figured I’d play it out to today with the Dutchmen’s former conference as well.

Overall, a CAA team has gone from as many as three games under .500 to .500 just six times since 1993-94. Half of those happened during the wild, parity-heavy 1996-97 season, when Old Dominion and UNC Wilmington tied for first at 10-6 and the next six teams finished within three games of the co-leaders.

One red flag: None of the teams listed below won their conference tournament and NCAA Tournament berth. But none of them came back from five under .500 to get to .500, either!