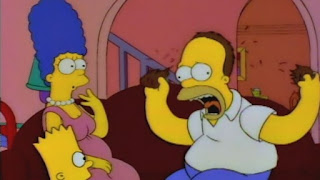 In this file photo from last summer, Sully Ray, above right, realizes he can no longer work at the bowling alley and has to return to the nuclear power plant to support his suddenly expanding family.
There have been a few Big Days here since Defiantly Dutch launched--some good, some bad, some a little bit of both. Never has there been a bigger or better Big Day than Thursday, when the Defiantly Dutch family grew as Sully Ray became a Dad to a baby boy. Tom Pecora, knowing the height and athleticism of the Sullivan boys, has already inked Sully Ray Jr. to a letter of intent for the fall of 2028 (that's five presidential debates from now!).
Before that, I look forward to many games with Sully Ray Jr, who, if his Dad and Grandpa are any indication, should be elbowing me and kicking me aside in the pursuit of free T-shirts by November. I also look forward to telling him of his Dad's wild child youth, such as the time he got rip-roaring drunk as we partied with the New Hampshire basketball team at the North Atlantic Conference tournament and the time he saw me stalking around The Chronicle office, cursing and throwing stuff because I was panicking yet again on deadline, and said "Beach. Cut the [crap]."
Anyway, those are tales for another day. Hearty congrats today to Sully Ray and his wonderful wife, as well as the new grandparents. The T-shirts I catch today will count towards my total, though, despite your excused absences.
Posted by Jerry Beach at 4:41 AM