For Jenkins, without a championship, there's no point 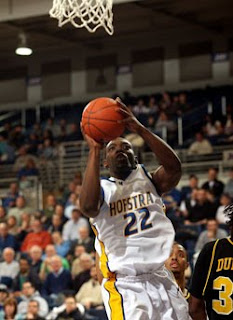 Charles Jenkins might have the mature outlook and cadence of a middle-aged assistant coach, but he’s still young enough to admit he doesn’t always forget about a game as soon as he walks out of the arena.

It’s been more than eight months since Jenkins took his last shot that counted, an 18-footer that was blocked by Jonathan Adams as time expired as Old Dominion escaped with a 52-51 win in the CAA quarterfinals. The disappointment of laying on the floor of the Richmond Coliseum as the Monarchs celebrated around him—as well as the gnawing sense of what could have been if Jenkins had made the shot—drove Jenkins throughout the summer.

Despite a 21-11 record, the Flying Dutchmen weren’t invited to the NIT and elected not to pursue a bid to either of the two newer postseason tournaments. Old Dominion lost in the CAA semifinals against eventual champion VCU, but the Monarchs accepted an invitation to the inaugural Collegeinsider.com Tournament and won the title. ODU, aided in part by the momentum generated during that run, is the consensus favorite to win the CAA this year while the Dutchmen have been pegged as a middle-of-the-pack team.

“That loss sticks in mind,” Jenkins said after the Blue-White Scrimmage in October. “I have the picture from when I was laying down crying and guys [were] cheering over me [after he missed a game-winning shot as time expired]. I have the film in my room. I don’t want to dwell on it, but I want to use it as motivation, because I know we were that close to going down there and doing something special.”

Jenkins has already established himself as a singular talent. He was named the CAA rookie of the year as a freshman and an all-league player as a sophomore, when he emerged as one of the most versatile players in the country by being one of just six players to average at least 19 points, four rebounds and four assists per game. Last month, Jenkins was selected as the CAA preseason co-player of the year (along with Old Dominion’s Gerald Lee) in a vote of the league’s coaches, sports information directors and media.

Jenkins is beginning to get notice outside the Atlantic seaboard as well: ESPN.com’s Jay Bilas has already written about how he wants to see Jenkins, whom he says “…could play anywhere,” and columnists from other national websites have also expressed an interest in profiling Jenkins.

Like most players of his caliber, Jenkins says he is honored by the attention but more focused on the team than himself. Such an approach is the politically correct one, if not an always truthful one, but there’s plenty of evidence Jenkins is as selfless behind closed doors as he is with a microphone in his face.

Those around the Hofstra program were impressed with how authentically happy Jenkins was for Zygis Sestakos last season when the little-used senior 3-point specialist got red-hot late in the conference schedule and single-handedly lifted the Dutchmen past James Madison in a double overtime classic in late February.

Jenkins, who is entering his second season as team captain, has also embraced a leadership role with a team that has more newcomers than returnees and in particular has hit it off with freshman Chaz Williams, which is a doubly good sign for the Dutchmen’s fortunes considering Williams is expected to fill the point guard vacancy that has existed the last two seasons.

Jenkins said the experiences of last year—in which he often felt overwhelmed trying to do everything on and off the court, especially in a nine-game stretch from Dec. 13 through Jan. 14—were valuable in preparing him for this season.

“I think it was the best thing that could possibly happen to me,” Jenkins said Wednesday, a day before the Dutchmen traveled to Kansas for the season opener tonight against the top-ranked Jayhawks. “It let me know that every night can’t be perfect and let me know that there’s other things that I can do on the floor that can help my team. It’s not all about scoring.

“And I can’t get down on myself, especially now because I have guys that look up to me. They watch my moves, they watch my attitude on and off the court.”

At the halfway point of his Hofstra career, Jenkins already knows he will be defined not by the points he puts up (he’s on pace to break Antoine Agudio’s school scoring record) but the banners that hang at the Arena. In that regard, he is remarkably similar to Speedy Claxton, who said during his junior season that he would be viewed as “…just another guy” if he didn’t lead the Dutchmen to the NCAA Tournament.

Claxton, of course, led Hofstra to the America East title as a senior in 2000 and is viewed as perhaps the most pivotal player in program history. A decade and one conference later, Jenkins would like nothing more than to follow Claxton’s lead.

“Playing as well as I have, I’m supposed to have all the accolades and everything,” Jenkins said. “I don’t really like that. I’m more of a team player. I always regret things from the past. I remember talking to my strength and conditioning coach freshman year [and saying] I would give in my rookie of the year trophy to play a couple more games in the [conference] tournament. I would give the Haggerty Award [which Jenkins won last year as the top player in the metro area] to be a champion in this league.