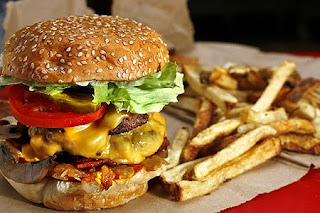 CAA prognosticators obviously remembered Five Guys' advertisements at Hofstra games when evaluating this year's Flying Dutchmen.
A bit later than I’d planned, but here it is (boy, have my family and friends heard THOSE 10 words before): The third Running Tally of CAA predictions. We’re up to 13 polls now, three more than last year, and always eager to see more as we approach Friday (it’s almost here, it’s almost here, it’s almost here!). So if you come across a poll that isn’t included here, send it to me via email or Twitter so I can update the rankings.
These rankings include four new polls—CBSSports.com, Blogging The Bracket, The Sports Xchange and The Sports Network—and it’s interesting to see how these predictions shake out since three of them are based on the most current information. (The Sports Xchange poll was included in the USA Today Sports Weekly college hoops issue)
Without further ado:
1.) Old Dominion (10) 18

—It took lots of bellowing on my part, but the closer we get to the season, the more seriously the damn liberal media seems to be taking the Flying Dutchmen. Hofstra was picked fifth or higher in all four of the new polls (three fifths and a fourth from The Sports Network)—one more top five placing than in the first nine polls combined. Pretty neat: The Dutchmen are picked fourth, fifth or sixth in every poll (six sixths, four fifths and three fourths), making them one of only two teams, along with Old Dominion, picked entirely within a three-spot range. The Dutchmen are also one of just four teams projected to finish in the top six in every ranking (along with ODU, VCU and Mason). Lastly, their six sixth-place predictions make the Dutchmen one of just two schools picked in the same spot in six polls (Northeastern and second).

—Old Dominion remains the overwhelming preseason favorite, but apparently, publications and websites that now or formerly held the TSN moniker don’t like Old Dominion. The Monarchs received three firsts and a third (from The Sports Network) in the latest polls. The third was the first time the Monarchs had been picked that low since Sporting News. ODU is the only school picked in the top three in all 13 polls.

—VCU, on the strength of four top three votes (including a first from The Sports Network and a pair of seconds from CBS and BTB), jumps past Northeastern and back into second place overall. VCU was second after our first running tally. The Rams have been picked in the top four in every poll and in the top three in all but two (Blue Ribbon and Rush The Court). Third place remains their most popular selection (five votes).

—People seem to be growing a bit uncertain about Northeastern, which has six second-place votes and was picked in the top three in eight of the first nine polls but was ranked as high as third by just one of our four new ones (CBS) as it returns to third. The Huskies were ranked fourth by BTB and TSX and seventh by The Sports Network. Before this, the Huskies were picked fourth or higher by everyone except Sporting News. Hmm. There’s that TSN bias again.

—James Madison earns this Tally’s Motley Crue video by recording three sixths and a seventh (CBS). The Dukes have slowly slipped behind the Dutchmen, with whom they were tied in the first Tally and a mere two points behind in the second. That said, JMU almost joined Hofstra and ODU as the most consistent team in these polls: The Dukes have been picked four times apiece in fifth, sixth and seventh. The lone outlier was a fourth-place vote from Lindy’s.

—The other spot swapping in the poll occurs at seventh and eighth, where Drexel edges past wildly unpredictable Georgia State by a point to regain the seventh slot. Drexel, which is annually the least predictable team in the CAA, is one of just three schools picked in a different spot in each of the four new polls. A fifth from The Sports Network is enough to offset an eighth, ninth and 10th. That fifth-place vote is the highest Drexel has received. The Dragons have been picked seventh four times.

—It doesn’t matter if the publication is of the dead tree or online variety, nor whether the rankings were compiled two months or two days ago. Georgia State remains all over the place. Like Drexel, the Panthers were picked in four different spots—from sixth (CBS) to 12th (The Sports Network) with a seventh and a ninth thrown in there as well. Georgia State is one of three schools to collect at least two votes in five different spots, but nobody has the wacky range of the Panthers, who have been picked twice apiece in sixth, seventh, eighth and ninth—and three times in 12th. The bottom six teams in the overall rankings have been picked in the top six just five times out of a possible 78 ballots, but Georgia State accounts for four of those. So after all that, the Panthers will probably finish first, second, third, 10th or 11th.

—Delaware received its first eighth-place vote (BTB) since preseason magazines Sporting News and Lindy’s, as well as its first 12th-place vote (TSX) and two nines. Delaware is one of three schools picked eighth or lower in every poll. The Blue Hens have been picked ninth four times.

—Of the bottom four teams in the overall rankings, the one that seems to have the most positive momentum is UNC Wilmington, which is the only one of the quartet not to get a last-place vote in the most recent polls. The Seahawks got a seventh (BTB), two 10ths and an 11th (TSX) to solidify their 10th-place ranking. They’re also the only school among the bottom four teams predicted to finish higher than eighth in any poll (they were also picked seventh by Lindy’s). The Seahawks have been picked 11th and 12th three times apiece and twice each at seventh, eighth and 10th.