Revenge of the Nerds III: The Next Generation of CAA Dorkdom 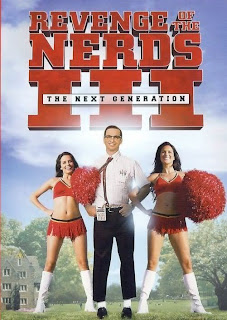 Can someone explain to me how there were as many Revenge of the Nerds TV movies as theatrical movies? So wrong.
In immersing myself in the CAA predictions over the last eight seasons, I thought it’d be interesting to run the numbers for the last eight years and see which teams most often exceeded—and failed to meet—expectations. I recognized even at the outset that it would likely be a flawed exercise, because teams that are traditionally picked low would have an obvious “advantage” over those that are typically picked and finish higher, but since I’m a nerd, I figured I’d do it anyway.
I was right, to a degree, but the findings were still interesting. Below you’ll find the overall standings (with the number of times the school finished in its predicted spot in parenthesis) followed by some analysis.
Just as a reminder of the methodology of this study, as first explained Monday: I went through the last eight seasons and awarded teams the difference between their predicted finish and their actual finish. So last year, when the Dutchmen were picked seventh but finished fifth, they earned two points.
1.) Towson: 9 (2)

—Ninth shall be first, at least here! Hofstra’s tenure in the CAA has been marked by consistent inconsistency The Dutchmen finished far short of expectations in their first two seasons in the CAA, when they were minus-5 in 2001-02 (fifth to 10th) and minus-2 (seventh to ninth) in 2002-03, before proving the prognosticators wrong each of the next three years (seventh to fifth, seventh to fifth and fourth to third). But the Dutchmen produced two straight negative finishes in 2006-07 (first to third) and 2007-08 (fifth to eighth) before bouncing back last year (seventh to fifth). Good news: The trends suggest a couple more seasons of exceeded expectations!

Now on with the rest of the teams in order:

—Towson’s “victory” here is the very definition of an empty one. The Tigers have never been picked higher than seventh and have been picked to finish last or next-to-last six times, including in each of the school’s first four years in the conference.

—Conversely, the most impressive collective performance has been produced by VCU, which has been picked lower than fourth just once yet is still second in our poll. Of course, the Rams finished first the year they were picked sixth, which accounts for more than half their points, but still, it’s impressive work to be picked among the top teams every year and meet or exceed those forecasts.

—Like Towson, William & Mary’s placement near the top of these standings is a byproduct of continually being picked in the bottom quadrant. The Tribe were picked to finish in the bottom three in each of the first six years, and their highest forecast (eighth) occurred last year in the aftermath of their surprising run to the CAA finals the previous March. Half of their points in this poll came from finishing fifth in 2007-08 after being picked ninth.

—Northeastern benefits a bit from the school’s more recent inclusion in the CAA, but four seasons is enough time to include the Huskies without any sort of asterisk. Plus, their performance warrants the plus-6 rating: The Huskies finished higher than predicted in their first three seasons and third last season, down from second in the preseason.

—Drexel’s overall performance is an impressive one, but it’s come with plenty of twists and turns. Last year, the Dragons were picked 12th and finished sixth, the biggest positive difference between projection and reality. The year before that, the Dragons were picked fourth and finished 10th, which is—you guessed it—the biggest negative difference between projection and reality. The Dragons also exceeded expectations by five spots in 2001-02 (ninth to fourth) and three spots in 2003-04 (fifth to second). All of which means the Dragons will probably be a long way from seventh this season, one way or the other.

—Old Dominion’s plus-2 total would seem to make sense for one of the CAA’s traditional powers, but the Monarchs collected five points in exceeding low expectations in the first three years, during which they were picked seventh, eighth and sixth. The Monarchs have been picked in the top four in each of the last six seasons and have never finished outside the top four in that span.

—Drexel has been wildly unpredictable the last eight seasons, but the Dragons are positively placid compared to UNC Wilmington. After being picked and finishing first in 2001-02 and 2002-03, the Seahawks’ performance has gone as follows: Minus-4 (third to seventh), plus-3 (sixth to third), plus-4 (fifth to first), minus-5 (fifth to 10th), plus-4 (sixth to second) and, finally, a mere minus-1 (11th to 12th). Whew. At least Benny Moss has plenty of evidence when he’s speaking to the Seahawks about their ability to exceed this year’s minimal expectations.

—Georgia State, like Northeastern, has been in the league for just four years, but the Panthers are the anti-Huskies in that they’ve yet to better their predicted finish. That’s discouraging considering the Panthers have never been picked higher than sixth and were picked among the bottom five in each of their first three seasons.

—How’s this for a summation of the David Henderson Era (Error?) at Delaware? In his final five seasons at the helm—the first five seasons of this study—the Blue Hens never once exceeded expectations. They finished lower than predicted four times and in their projected spot once. And the year after he was fired, the cupboard was so bare the Blue Hens finished 12th, as predicted, under Monte Ross. The Blue Hens’ first gain (from 10th to seventh in 2007-08) was negated by a minus-4 last year (fifth to ninth).

—I’d love to sit here and tell you George Mason’s 11th-place ranking is accurate and that the Patriots are the second-worst program in the CAA, but, well, that’d be a lie, unfortunately. The Patriots are the inverse of Towson: They were picked in the top three in each of the first seven years of this study and fourth last year. Mason has exceeded its prediction just twice and has finished lower than predicted five times, but it has never finished lower than sixth.

—The last-place ranking for James Madison, on the other hand, is pretty accurate, though things certainly seem on the upswing with Matt Brady in charge. The Dukes have never been picked higher than sixth but finished lower than their predicted spot six times in the first seven years of the study. Last year’s plus-2 (ninth to seventh) represented their biggest net gain.

Labels: CAA predictions vs. reality, Revenge of the Nerds