Behold the power of Bucco Bruce and the Creamsicles!! 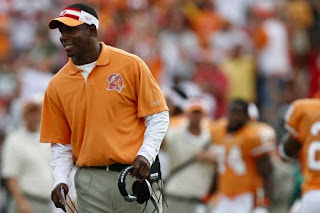 See what happens when you listen to Defiantly Dutch and go old school?

Tim Ryan: “How much credit do you give to the creamsicles?”

Tim Ryan: “Wear them the rest of the year!”

I’m not usually one to open a story with a quote—too cheesy, and all that, though my archives feature plenty such pizza-worthy ledes—but I could be Houdini with the written word and I still couldn’t sum up the first win of the season by the Tampa Bay Buccaneers—known worldwide as The Official NFL Team Of Defiantly Dutch—as succinctly or as truthfully as Fox announcers Tim Ryan and Sam Rosen.

The Bucs, coached by Flying Dutchmen alum Raheem Morris, wore the franchise’s old orange uniforms and donned the old Bucco Bruce helmet Sunday, when they shockingly and gleefully ended their pursuit of history Sunday by storming back from an 11-point fourth quarter deficit to knock off the Green Bay Packers, 38-28.

The franchise that began play in 1976 with an 0-14 season and was finally relieved of its burden as the worst team ever last season by the Detroit Lions doesn’t have to worry about regaining its spot in history. Nobody remembers 1-15, baby, and all it took for the Bucs to fix things was a trip in the Way Back Machine. (I will conveniently ignore how awful the Bucs were during the Creamsicle Era here)

1-0 in the old orange uniforms, 0-7 in the current uniforms—and the Bucs don’t want to mess with a good thing. Linebacker Geno Hayes told The Tampa Tribune earlier today he “…wouldn’t mind wearing them again at all” while Morris mused immediately after the game Sunday about how he and the players would “…have to get into some negotiations to see if we can put on our orange some more.”

I’d just like to point out that I was calling for a return to the original duds when Morris was hired in January. Listen to me, people. I know what I’m talking about. Sometimes.

Sure, the Bucs’ old uniform scheme was a hideous one, but it was original and it assured only the diehard fans wore the apparel. The current look has coincided with sustained success (six playoff berths and, of course, the glorious victory in Super Bowl XXXVII), but it looks like it was designed by a focus group determined to improve the Bucs’ merchandise sales. I hate walking through a mall, seeing someone in a Bucs uniform and wondering if he also wears a multi-colored Yankees hat, or if he’s sporting the uniform as part of a gang initiation.

I should have known things were going to go well for the Bucs and I when a quirky bit of scheduling even gave us the opportunity to watch the game. The Giants were playing at 4 on CBS and the Jets were off, meaning Fox was able to give us a rare out-of-market game at 1.

We got Cardinals-Bears, which made my wife the Bears fan quite happy, but things really began to go my way when Fox made the rare decision to dump that game with the Cardinals up 34-7 early in the second half and take us to Tampa, where the Bucs were surprisingly not getting blown out.

Still, it looked like the Bucs would have to be content with a competitive defeat until the magic of Bucco Bruce and the Creamsicle uniforms emerged in the fourth quarter along with rookie QB Josh Freeman, who displayed the type of poise that suggested he could be the franchise QB the Bucs have been searching for since Doug Williams.

A long kickoff return set up Freeman’s seven-yard TD pass to Kellen Winslow, and following a Packers punt, Freeman impressively led an eight-play, 72-yard drive that he capped with a four-yard touchdown pass on fourth down to give the Bucs the lead with a little more than four minutes left.

Tanard Jackson returned an interception 35 yards for the insurance score in the final minute, which was appropriate icing on a game in which the Bucs set up their first TD with a long interception return and scored their second TD on a blocked punt return. Mmm, defense and special teams setting up scores for the offense. That’s good football.

Good for the Bucs, good for Morris—and good for Hofstra, which really needed some positive sports news after a crappy Saturday in which the Flying Dutchmen football team lost another heartbreaker in the final minute, the field hockey team was knocked out of the CAA tournament with a 5-1 loss to Drexel (I’m pretty sure five goals in field hockey is the equivalent of, like, 150 points in basketball) and the men’s soccer team, which spent much of the season atop the league, missed out on the CAA tournament after a 0-0 tie with UNC Wilmington.

With the Flying Dutchmen four nights away from visiting top-ranked Kansas, I think we need to change up the luck in order to ensure an upset of the Jayhawks. Out with the blue, white and gold color scheme and the lions logo, in with orange and white and Bucco Bruce!!