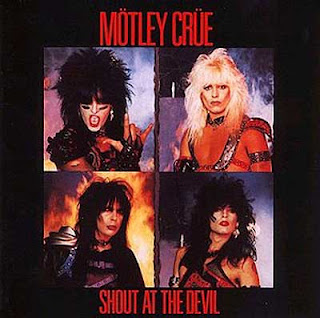 If you play this album backwards, it says "You have made a terrible mistake picking the Flying Dutchmen sixth."
The unpredictability of the CAA is a popular and accurate storyline within the blogosphere, but if the preseason predictions are any indication, the suspense may be at a premium in the conference this season.
There is near-unanimity among the magazines and other writers about the identities of the haves and the have-nots. With only one exception, the top six teams in the overall tally were ranked within the top six by all six polls (Shout! Shout! Shout at the devil!!!!). Obviously, the same applies to the bottom six. The exception: Athlon ranked James Madison seventh, one spot behind Georgia State.
That’s right: The Flying Dutchmen are an overwhelming choice to finish in the top half of the CAA! We’re still very mad at all of you, though, for not picking the Dutchmen first.
To find out where exactly the consensus has the Dutchmen pegged, check out the first running tally of predictions, to be followed by some analysis of the picks as well as a look at how this year’s trends stack up to last year’s.
And just as I did last year, in compiling the polls, I paid tribute to my days as a mediocre cross country runner by awarding each team the point total correspondent with its place in the standings (i.e. one point for first place, 12 points for me, err, last place).
If you happen to come across any previews we’ve missed, by all means, email me or notify me on Twitter so I can update the poll. We had 10 polls last season and I’m sure I missed some.
Tommy Lee drum roll please!

—Charles Jenkins is the leader in the clubhouse for Preseason Player of the Year honors with 2.5 votes. He was the pick by Athlon and Mull and shared CAA honors with Gerald Lee. Larry Sanders was tabbed by Sporting News and Lindy’s while Lee was selected by Blue Ribbon.

—The Dutchmen were picked fourth by Sporting News and Lindy’s and sixth by everyone else, which makes them one of three schools picked in the same spot by four different outlets. Old Dominion and Drexel (seventh) are the others. The consistency, for lack of a better word, is a marked change from last year, when the Dutchmen were picked anywhere from fourth (The Sports Xchange) to 12th (The Sports Network).

—Old Dominion and VCU are the only two schools picked in the top four by all six outlets. ODU is the only one unanimously ranked in the top three. The Monarchs were in the top two in every poll except Sporting News.

—George Mason was ranked in the top five by all six outlets. The Patriots’ highest vote came from Sporting News (second) and their lowest from Lindy’s and Athlon (fifth).

—Once again, the bouncing ball award goes to Georgia State, which is ranked anywhere from sixth (Athlon) to last (Sporting News and Lindy’s) as well as eighth (CAA and Mull) and ninth (Blue Ribbon).

—Delaware is ranked eighth or lower in all six polls, and it should be noted its two 11th-place votes came in the most recent rankings (CAA and Mull). The Blue Hens, of course, lost starting point guard Brian Johnson to a season-ending knee injury in August.

—Towson and William & Mary (which, by the way, in a homage to the awesomeness of Scrubs, will now be dubbed the College of Bill Lawrence) are both ranked in the bottom third of every poll. Good news for fans of the Tigers and Fighting Lawrences: Drexel was ranked in the bottom third of every preseason poll a year ago and was in contention for a first-round bye until literally the last second of the regular season.

—Only one other school has a gap of more than three spots between its highest and lowest ranking: UNC Wilmington was picked seventh by Lindy’s and last by Athlon’s, Blue Ribbon and the CAA. The Seahawks were also picked ninth by Mull.

—There was a lot more fluidity in last year’s polls, as you can see by clicking on our first, second, third and fourth running tallies. The gist: Through six polls last year, three teams had been ranked in the top half of every poll (VCU, Northeastern and George Mason) and three teams had been ranked in the bottom half of every poll (Towson, William & Mary and Drexel).