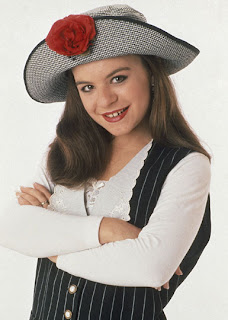 Don't let the smile fool you: Jenna Van Oy is not happy with the preseason CAA poll, either.

All my ranting and raving about the dangers of annoying Dutch Nation (snort) apparently have gone unheeded. The CAA preseason poll—in which coaches, SIDs and media all vote—was released today at Media Day and the Flying Dutchmen were picked sixth, which means I’m going to be absolutely insufferable when Hofstra is cutting down the nets in Richmond the second Monday of March.

At least the non-believers are a little less mean and vicious to the Dutchmen: Last year, Hofstra was picked seventh in the CAA poll. The trend is obvious: The Dutchmen will be preseason favorites in 2014-15!

The voters were nicer to Hofstra when it came to picking the preseason all-conference team as Charles Jenkins shared the co-CAA preseason player of the year award (is it really an award if it hasn’t been awarded yet?) with Old Dominion’s Gerald Lee.

As I noted a few weeks ago, when Brian Mull of the Wilmington Star-News picked Hofstra sixth and Jenkins as his preseason POY,  the concept of the league’s best player emerging from a middle-of-the-pack team only further proves how deep and unpredictable the CAA will be this year.

And in all seriousness, I’m going to have Hofstra picked a little higher than sixth (no, really!) when I put my predictions to paper, but beyond favored Old Dominion, I think teams two through six are a crapshoot. You’ll probably do just as well throwing them in a hat and picking the CAA that way. Oh wait a minute, that didn’t work out so well last year.

Anyway, here’s the poll. Stop by tomorrow for my first running tally of the preseason predictions.