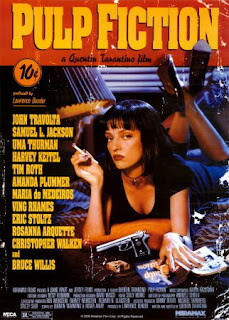 It’s a lot easier to explain to the young ‘uns the appeal of Pulp Fiction than it is to explain, oh, I don’t know, Hootie and the Blowfish. There’s a reason Pulp Fiction is continually among the top 10 favorite movies at imdb.com, and it ain’t because dudes in their mid-30s are stuffing the virtual ballot box.

But as much as Pulp Fiction is a multi-generational hit, trust me when I tell you this: Seeing the movie on its opening day Oct. 14, 1994—and countless times thereafter as it became a cultural sensation—is an experience you cannot match and cannot hope to replicate.

Like any wanna-be hipster in 1994, I was into Quentin Tarantino. He’d written the latest Greatest Movie I’d Ever Seen, True Romance, and even though I’d only seen his breakthrough film Reservoir Dogs once at the time, I loved it and nodded along with everyone in the office who was spouting lines from the movie and joined in the mimicking of Mr. Blonde whenever someone cued up “Stuck In The Middle With You.”

Pulp Fiction arrived with plenty of buzz (built the old-fashioned way, via newspapers and word of mouth) and we were anticipating the movie for weeks, so much so that we couldn’t even wait until Friday night to see it. We piled into a friend’s car shortly before 2 pm—I’ll never forget darting out of an English class and the driver motioning for me to hurry it up—and went to a theatre in downtown Hempstead, which, you know, was not an area that Hofstra encouraged its students to frequent.

But we would have gone to Siberia if it meant seeing Pulp Fiction, and it would have been worth the effort. We went in expecting awesomeness, and what we got was indescribably better than that.

All I remember is watching it with giant, ear-to-ear grin plastered across my face. It was brilliant, it was boisterous, it was savage, it was hilarious, it was exhilarating, it was random, it shattered all the conventions of modern film-making and, in the end, it was even a little noble.

The film, almost overnight, turned Tarantino into Hollywood royalty. Pulp Fiction became the first independent film to gross $100 million, earned seven Oscar nominations (and won for best screenplay), revived the career of John Travolta and turned Samuel L. Jackson into an A-lister. But my favorite performance in the film remains the one brilliantly turned in by Bruce Willis who, as the alternately scheming and sympathetic boxer Butch, utters pages and pages worth of dialogue without ever opening his mouth—or, in his first scene, by barely even batting an eyelash.

The non-linear script rewarded those who stuck with it and left the writers and pseudo film critics in the audience with plenty to digest, particularly in the days before we knew everything about a movie long before it hit the theatres. To know that the unforgettable third act featured Vincent, who was blown to pieces in the second act, would have ruined some of the mouth agape fun. And bursts of shocking violence that followed moments of tranquility and inconsequence would not have been nearly as jarring if we already had an idea of what was going to happen.

The symbolism was alternately obvious and sneaky: Jules sucks a soda dry in front of the doomed Brad and—in one of my favorite scenes—the board games Operation and Life are stacked atop one another as Vincent and Lance frantically try to figure out how to save the overdosing Mia.

The pop culture references from Tarantino (who reportedly played the “Welcome Back Kotter” board game with Travolta in wooing the actor) were both winking and obscure. There was the almost poignant scene of Mia and Vincent dancing, which served as a reminder of what Travolta once was 17 years earlier in Saturday Night Fever, as well as a discussion of what a television pilot is right before Jules and Vincent complete an early morning killing.

And even today, we still marvel at the layers to the story. Why does Marcellus have a band-aid on his neck and what’s in that briefcase, the one that is opened with the combination 6-6-6?

There are the acts of shocking gallantry and vulnerability displayed by Butch and Jules. Butch, less than 24 hours removed from swindling Marcellus Wallace and showing no remorse for killing a man with his bare hands, runs back into the hillbilly dungeon to rescue Marcellus from a gang rape.

Jules reconsiders his ways after he and Vincent survive point-blank attempts on their life immediately after executing Brad and preaches the gospel to Pumpkin, while Vincent condescendingly dismisses Jules’ affirmations and ends up paying dearly for his lack of faith, first by accidentally shooting Marvin in the face and then getting murdered by Butch days later.

The only thing worse than listening to a guy butcher movie lines is reading a guy butcher movie lines—especially on a blog that strives to be PG-13 most of the time—so I’ll spare you most of that, except to say that the unforgettably quotable cameos by Christopher Walken and Harvey Keitel provided the best of the hilarious one-liners that served as a collective bonding experience.

I truly can’t count how many times we saw Pulp Fiction during its theatrical run (I swear it ran as the $1 movie on campus for the entire spring 1995 semester). It remains a hair behind Heathers as my favorite movie ever (if you think this is gushing, be glad Heathers wasn't released in 1994) and and one of those movies that, whenever it shows up on one of the pay cable channels, demands I drop whatever it is I’m doing and watch it. I watched it on DVD as I wrote this, except I did little writing, because even 15 years later it’s impossible to turn away from the screen.

Pulp Fiction was the perfect movie for the semester in which the reality was even better than my sky-high expectations. It was, by far, the best time I’ve ever had in a movie theatre, and I’m sure it’ll never be surpassed now that I’m old and grumbling about how expensive tickets are and how those damn kids won’t keep it down during the film.

“That was [expletive] trippy,” Jody says after Mia is revived. It sure was, in ways that could only be truly experienced and appreciated if you were sitting in a movie theatre for the very beginning of a pop culture revolution.