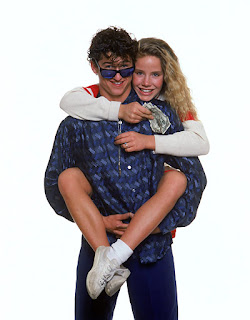 No offense, Mike and Eamonn, but you're not nearly as good-looking as Cindy Mancini.
One of my favorite books ever is The Worst Team Money Could Buy, a warts-and-all behind-the-scenes look at the embarrassment that was the 1992 Mets by longtime New York baseball writers Bob Klapisch and John Harper. The book is as much about the media and the Mets’ toxic relationship with it as it is baseball, which is probably why I love it so much.
The book is filled with little vignettes about what it’s like to be a baseball writer, including one by Klapisch titled “A Day In The Life” that is pretty self-explanatory. Klapisch writes of the pros of his career choice, which include seeing “…his name in print every day—and if you don’t believe that matters, ask how many writers leave their bylines off their stories.”
Sixteen years after the book was published, newspapers are, of course, dead of countless self-inflicted wounds.  So these days, those of us who write for a “living” (snort) do it online and get our rush out of seeing our work linked somewhere else.
And so it was that I pounded my chest on Monday, upon seeing that your good friend and mine Mike Litos linked to my recap of the Blue/Gold Scrimmage Saturday and noted how Charles Jenkins sounded “…like a 40-year-old assistant coach” in praising point guard Chaz Williams. And then, on Tuesday, I ran down the street with my laptop bellowing “WHO’S THE MAN NOW?!” when I saw my story linked by Eamonn Brennan in Yahoo! Sports’ college basketball blog, The Dagger.
I’m in the big time now, and unlike in high school, it didn’t involve me paying the hottest girl in school to pretend to be my girlfriend for a few weeks. Thanks to Mike and Eamonn for the links, and I figure the best way to avoid falling into the same trap I did as a teenager—when my new-found popularity turned me into an insufferable jerk who alienated everyone, at least until the conveniently happy ending in which Cindy and I rode off into the sunset on my lawn mower, please, if that was my life, she’d have to walk off into the sunset as I pushed the mower along—is to get right back into the routine here by doing the same thing I did as a nobody last week, namely posting my second Running Tally of CAA predictions.
(That might be the longest paragraph ever not written by Joseph Conrad, my apologies)
Anyway, we’ve got three new polls added to the Tally: Rivals.com (thanks to Litos for that link as well), Bleacher Report and Rush The Court, the latter of which is written by GMUHoops.com maven Ryan Kish. He doesn’t pick Mason first. He’s a better man than I’d be in that position!
Click on the links to see all the picks. And see below to, err, see the new running tally and how the new additions influenced the overall rankings.
1.) Old Dominion (7) 12

—Our beloved Dutchmen were once again disrespected by the damn liberal media as Rivals.com and Rush The Court picked them sixth and Bleacher Report pegged them for fifth, However, that was enough for the Dutchmen to break the fifth-place tie with James Madison. The Dutchmen have been picked sixth six times (Kickstart My Heart!), fifth once and fourth twice. So many doubters, so little time.

—Old Dominion continues to put a stranglehold on the top spot by collecting three more first-place votes. No other team has been picked in the same place as often as ODU. The Monarchs have been picked first by everyone except Sporting News and Lindy’s.

—Northeastern, meanwhile, surges past VCU for the overall second spot by being picked second in each of the three new polls. The Huskies and Dutchmen are the only teams to be picked in the same spot in six polls. In addition, NU has been picked among the top three eight times in nine polls.

—VCU is still solidly entrenched among the top three after receiving two threes (Rivals and Bleacher Report) and a fourth. The Rams and Old Dominion remain the only two schools picked in the top four in all nine polls.

—If this were the Billboard Hot 100, the “Hot Mover” of the week would be UNC Wilmington, which jumps from 12th to 10th on the strength of two eighths (Rivals and Bleacher Report) and an 11th. Interesting that even the most recent polls are all over the place with the Seahawks—from the afore-mentioned eighth-place picks to Brian Mull’s ninth-place vote and the 12th-place vote in the CAA poll.

—The team whose fortunes seem to be taking the biggest uptick, though, is probably Georgia State, which moves from eighth to seventh thanks to collecting a fourth (Bleacher Report) a fifth (Rivals) and a seventh (RTC). The Panthers remain the most volatile team: They’ve been picked in seven spots in just nine polls. The only places they’ve been selected twice: Eighth and 12th. The only teams picked in as many as five different spots are George Mason, Towson and UNC Wilmington.

—More Georgia State: The Panthers are the only team keeping the ODU-NU-VCU-GMU-Hofstra-JMU sextet from a sweep of the top six spots. Those squads have received 51 of the 54 top six votes.

—George Mason and Delaware are the only teams other than Old Dominion to remain in the same spot as Running Tally I. Mason got a third (RTC), fourth (Rivals) and a sixth (Bleacher Report), the latter of which marked the first time the Patriots have been picked outside the top five. Delaware was picked ninth once (RTC) and 10th twice, which makes sense for a team that is considerably weaker now than it was when the preview magazines were put together in mid-summer. In fact, the only publications to pick the Blue Hens higher than the bottom third were Sporting News and Lindy’s (eighth in both).

—James Madison received a fifth (RTC) and two sevenths to fall behind the Dutchmen. The Dukes have been picked between fifth and seventh in all but one poll (fourth by Lindy’s).

—Drexel was picked below seventh in just one of the first six polls but in all three of the new polls: Eighth by RTC and ninth by Rivals and Bleacher Report. Won’t anyone listen to Litos and stop underestimating the Dragons and Bruiser Flint?

—This probably isn’t the type of versatility Pat Kennedy and Towson fans would like to see: The Tigers were picked 10th (RTC), 11th (Rivals) and 12th (Bleacher Report) in the new polls to fall to 11th overall.

—And finally, the College of Bill Lawrence falls into last thanks to two 12ths (Rivals and RTC) and an 11th. The Scrubs have been picked to finish in double digits by everyone except Sporting News (ninth).

—The Hofstra disrespect is spreading to Charles Jenkins, who was overlooked as the preseason player of the year by both Rivals (Gerald Lee) and Bleacher Report (Larry Sanders). RTC did not select a preseason POY. Sanders is now the leader with three votes, followed by Jenkins and Lee with 2.5 votes apiece.