The CAA Tournament (Or: How I learned to stop worrying and love symbolic gambling on Hofstra) 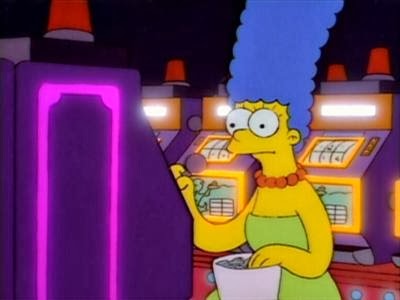 At least I haven't forgotten to make Molly's Florida costume yet.

When it comes to gambling, my Dad is better than anyone I’ve ever met—not at slots or roulette or poker or blackjack but at getting up and leaving the table at the peak of his winnings.

The rest of us who are fortunate enough to collect a tall stack of chips will not even consider leaving. Instead, our minds are racing with the thoughts of continuing to ride the hot streak and what we’ll do with all that money once we return home.

Of course, casinos are built on red-hot streaks that turn ice-cold, and most of us are familiar with the feeling of impending dread that comes with playing well beyond our peak and digging into the wallet to try and regain the magic as well as our profits.

But not Dad. He hasn’t been to a casino since well before my Mom died, but when he did gamble, the former stockbroker and perpetually cautious investor always knew exactly how much he had spent and how much he had profited, and once he’d decided he’d made a nice return on his initial ante, he’d cash out, go home and put his winnings into a section of his bedroom drawer reserved solely for gambling money.

I thought of my Dad and his gambling skills last night, when the eighth-seeded Flying Dutchmen advanced in the CAA Tournament by scoring the final nine points of the game to beat ninth-seeded UNCW Wilmington, 78-70, in front of what sure appeared to be a sparse crowd at Baltimore Arena.

If sports fandom is gambling—and really, aren’t we all sitting here hoping to someday hold the royal flush in our hands?—then we should by all means follow my Dad’s lead and step away from the table right now, before the Dutchmen take on top-seeded Delaware this afternoon.

The Dutchmen’s first CAA Tournament win in 1,097 days (but who’s counting?) provided profits, both obvious and symbolic, that should be stashed in a drawer and saved for next year. In providing us the anticipation of knowing another game awaited on the other side of slumber, the Dutchmen also reached double figures in wins for the first time in three seasons. There will be no banners or certificates printed up to commemorate a 10-win season, but a “10” under the win column looks and feels a whole lot better than a “9.”

In addition, the tournament win provides the tangible happy ending for the players whose career ends with the Dutchmen’s next loss as well as the beginning of a base for those who will return with hopefully higher expectations next season.

For the 22nd time in 32 games, graduate senior Zeke Upshaw (23 points) led the Dutchmen in scoring. Senior Stephen Nwaukoni, the only member of the Dutchmen who was on the court the last time Hofstra won a CAA Tournament game, produced the 10th double-double of his career with 10 points—including a slam dunk for the game’s final points with 13 seconds left—and 14 rebounds.

As for the underclassmen, junior Moussa Kone had 11 points and nine rebounds, graduate senior Dion Nesmith had 15 points and three assists (speaking of quitting while we’re ahead—Nesmith got a favorable ruling from the NCAA and will play a second graduate season next year, what were the odds of the NCAA ever tossing Hofstra a bone?) and freshman Jamall Robinson began the game-winning rally and gave the Dutchmen the lead for good by wading into a sea of aqua and putting back his own miss to begin a nostalgic 3-point play with 1:58 left.

By any reasonable standard, the Dutchmen have exceeded expectations and profited on this trip to the conference tournament. That’s far more than we got the previous two seasons, both of which began with similarly long odds—Ken Pomeroy gave Hofstra a 0.6 percent chance of winning this year’s tournament, the same percentage he offered last year, while in 2012 our friend John Templon had Hofstra winning the automatic bid a whopping 16 times in 10,001 simulations—yet ended with disappointment in the form of yet another narrow loss to Delaware last year and the most lopsided defeat in CAA Tournament history to Georgia State in 2012.

So we should push ourselves away from the table, cash out and invest nothing in today, right? It’s too much to ask us to not watch the game, but regardless of result—and let’s face it, CAA top seeds are 26-1 all-time against the no. 8 or no. 9 seed, so the result will probably be a loss—we should be content with our winnings from last night.

Except…except sports fandom is far more seductive than any winning streak at the poker table. We certainly know the likelihood of Delaware winning today, but I’m sure I speak for the other 17 Hofstra fans when I say we spent all of last night and this morning finding optimism in the two close losses to the Blue Hens during the regular season, concocting upset scenarios in our heads and envisioning the Dutchmen doubling their stack of chips and playing Sunday for a berth in the CAA title game Monday.

Such daydreaming only increases the possibility of heartbreak, of course, and all but ensures that if the Dutchmen lose today, our first thoughts will be of regret and what could have been instead of appreciating what we had.

But still. How can we not hope to parlay last night’s winnings into even more? It’s that time of year when you the outcome—exiting the table empty-handed—is all but inevitable. But we’ll keep on daydreaming and doubling down and playing for that royal flush, right until the last of our chips ends up atop someone else’s stack.

“There’s going to be some conference [winner] we’re going to be reading about in a week or two weeks,” Mihalich said earlier this week. “Somebody’s going to do it. And if you’re Hofstra, you hope it’s you.”

For one more game, at least, we’ve still got that. What more could we ask for?

Email Jerry at defiantlydutch@yahoo.com or follow Defiantly Dutch at http://twitter.com/defiantlydutch.
Posted by Jerry Beach at 11:48 AM