So you’re telling me there’s a chance! (Actually there is)


This has happened before. The Flying Dutchmen basketball team has been projected to contend for the CAA title before. I know it has.

In fact, I’m looking at visual proof of it, right here in a document titled “CAAPredictionsThru2013.” It contains, as you can probably surmise, the official CAA predictions every year since 2001, when Hofstra jumped from the America East in order to find a permanent home for its football program. No really. I swear.

Anyway, it takes a little scrolling down, but there it is in my favorite font (14-point Cambria, whatever that is):

The 2006-07 season—i.e. the one after The Great Screw Job—was the first one in which Hofstra was picked to finish higher than fourth in the CAA. We entered November not only bursting with giddy anticipation, but also possessing vivid daydreams of the heartbreak from the previous March yielding the ultimate payback, hopefully at the expense of those bastards from Fairfax.

Except, of course, it didn’t, thanks to a season that was as heartbreaking, in its own way, as its predecessor. Mostly because the championship dream ended with a loss to those bastards from Fairfax in which Greg Johnson drove the lane down three as time expired, at which point we all forever turned into Charlie Brown following the 1962 World Series.

WHY COULDN'T JOHNSON HAVE DISHED THE BALL BACK TO THE WIDE-OPEN AGUDIO AT THE THREE-POINT LINE?

Over the subsequent seven seasons, Hofstra was never picked higher than fifth in the preseason poll – though, of course, we managed, every year, to find ways to delude ourselves into thinking the Dutchmen’s championship hopes were better than projected. For example:

2011-12: Sure, Jenkins graduated and VCU just made the Final Four and Old Dominion is Old Dominion and Drexel looks REALLY good, but the head bastard amongst the bastards from Fairfax left and we’ve got strength in numbers.

2012-13: Sure, VCU is building on the Final Four run, unlike the bastards from Fairfax, and Drexel just made the NIT quarterfinals and Old Dominion is Old Dominion, but we’ve got nine really promising new players and they’re all going to be good, unless two-thirds of them get arrested, but what are the odds of that happening?

Fortunately, it didn’t take long to care again. A season of no expectations and little initial engagement reignited our passion for Hofstra basketball. For the first time in the CAA era, the Flying Dutchmen were the preseason pick to finish last. But they finished eighth, and it was the most glorious eighth-place finish ever.

Victories felt like they did in the winter of 1993-94, when each win was euphoric because it meant the Dutchmen were another win removed from being included in the discussion of the worst team in the land.

It was a pleasure to see newcomers such as graduate transfers Zeke Upshaw and Dion Nesmith, plus CAA Rookie of the Year runner-up Jamall Robinson, come in and not only begin to lay the foundation for the future but also maximize their opportunities, unlike the knuckleheads who immediately preceded them.

And it was a pleasure to watch Joe Mihalich, thrust into the seemingly unwinnable task of winning over fans who were deeply scarred by the events of the previous season and loyal to Mo Cassara, manage to win everybody over by just being himself and embracing Hofstra as Cassara, Tom Pecora, Jay Wright and Butch van Breda Kolff did before him.

The season ended March 8 with another narrow loss to eventual champion Delaware in the CAA quarterfinals. Mihalich unwittingly summarized the unusual affection we all had for the 2013-14 Dutchmen afterward, when he broke down at the press conference.

“There’s only one way to be for me—I don’t want to get corny on you here—and that’s to be totally invested,” Mihalich said this summer. “We were so close [in] so many games. Hey, only one team smiles, and every team wants one more. So it would have been great to get that one there and get in the semis.

“But it was a sad ending. It really was. There was so much emotion with what we did.”

The final buzzer was still echoing at Baltimore Arena when Mihalich and the rest of us realized the emotions and expectations would be different this season. With Niagara transfers Juan’ya Green and Ameen Tanksley and SMU transfer Brian Bernardi—i.e. the three guys we didn’t even want to think about last season—all eligible, the rebuilding plan was expected to take a sizable second step forward.

But that was before Mihalich landed Rokas Gustys, whose size (6-foot-9) and pedigree (he prepped at the legendary Oak Hill Academy) makes him perhaps the most promising big man Hofstra has ever recruited.

The preview magazines began hitting the newsstands in the summer, and they all had one thing in common: Hofstra in the CAA’s top three. And none were written by me!

CAA coaches and reporters covering the league agreed with the consensus and picked the Dutchmen third in the preseason poll—behind Northeastern and William & Mary—released at media day on Oct. 21.

Some knowledgeable prognosticators--such as the folks at SI.com as well as the great Zach Braziller of the New York Post--even picked the Dutchmen to win it all. Braziller went so far as to declare Hofstra was becoming New York City's team. (I should note I would think highly of Braziller, even if he hadn't beem telling me for more than a year that my pessimism about Hofstra hoops would soon be unfounded)

“Feels a lot different than last year—same level of excitement, but a different kind of excitement,” Mihalich said five days earlier at Hofstra’s basketball media day. “Last year we knew we had to coach every pass just to have a chance to win. If we play hard and get these guys to play together, who knows? Maybe we can be one of the teams in the league that come March can be playing the best basketball of anybody and do something special and climb up a ladder and cut down some nets.”

He said this 29 days ago, and my response now is the same as it was then:

AHHHHH THIS IS FREAKING ME OUT I DON’T KNOW HOW TO REACT TO THIS WHAT IS GOING ON??

Sure, we began every year but last year with visions of an NCAA Tournament bid dancing in our heads. But we also knew our hopes were of the long-shot variety, that the Dutchmen would need the type of breaks that only the other guys ever seem to get.

So when seasons ended before the Dutchmen could even get to the CAA championship game, there was disappointment, sure, but not the agony we felt in 2007. And there was something oddly comforting about that routine.

But hitting November and believing we’re about to watch a Dutchman team that is a legitimate title contender is as fantastic as it is frightening. Do we want to open ourselves up to walking the emotional tightrope again?

Yes, we do. This just feels different, and worth going all-in on. And “this” feels like it is encompassing more than just the men’s basketball program.

It reminds me of 20 years ago this fall, when the resounding performances of the football, volleyball and men’s and women’s soccer teams – the quartet went a combined 61-19-5 – only enhanced the excitement surrounding Jay Wright’s first Flying Dutchmen basketball team and fostered the notion that Hofstra, on the verge of Division I extinction earlier in the decade, was primed for a rebirth.

The circumstances are different this time. Now, Hofstra is trying to bounce back from the self-inflicted wound sustained by the demolition of football (did you really think I was going to go a whole piece without mentioning that?).

But the success this fall of the volleyball team (the likely CAA regular season champ), the men’s and women’s soccer teams (both of whom finished third in the CAA) and the field hockey team (which entered the final weekend of the season tied for second before missing the four-team tourney) has engendered the same feeling of anticipation heading into a new era of men’s basketball.

Now, like then, everybody who cares about Hofstra athletics feels united in optimism, instead of pessimism. One of my favorite Tweets of the year—and if you know me at all, you know I see A LOT OF TWEETS—came last Friday from Hofstra athletic director Jeff Hathaway, who snapped a picture of the volleyball team cheering on the women’s soccer team at Northeastern.

(Plus, the sequel to the greatest and most quotable movie of my generation, Dumb and Dumber, opens today, one month shy of the 20th anniversary of the original. And I look forward to seeing Dumb and Dumber To at the campus movie theatre next spring, over and over again, with my wife and ex-roommate, just like we saw the original over and over again in the spring of 1995!)

Buying into the optimism doesn’t mean being blinded by it. Of the 11 players suiting up tonight, we’ve never seen eight of them in a Hofstra uniform. We know enough about them to know we should be excited, but we also know how dangerous it is to invest in the completely unknown.

That well-earned wariness—imagine lapsing in Catholicism yet becoming a Hofstra fan and you have my existence—makes it impossible to avoid worrying about the unexpected disaster that we are certain is on the horizon. For instance, even if players stay healthy and out of trouble, the Sharknado could always hit Hofstra Arena. 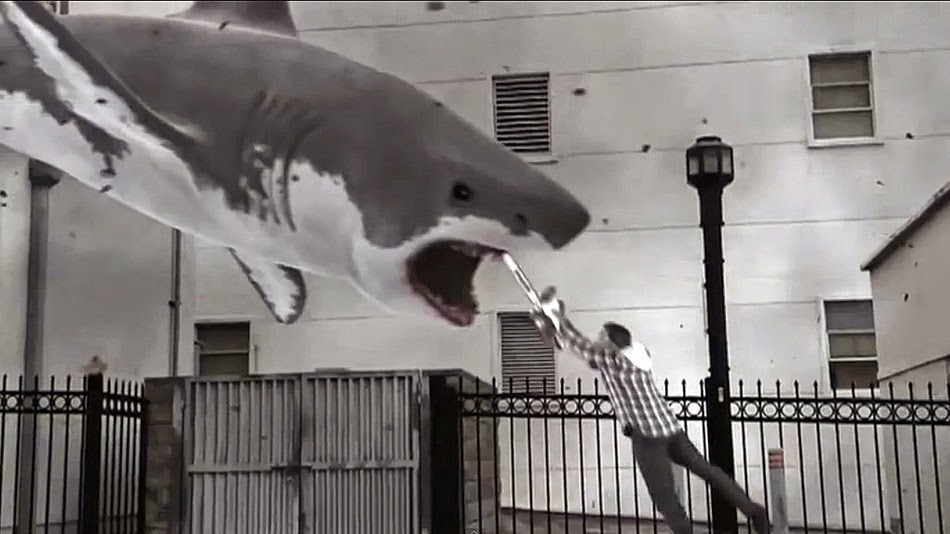 Joe Mihalich, right, tries to save humanity and Hofstra Arena by sawing thru a shark in this future file photo.

And as Mihalich says, only one team is left smiling. But hey. For the first time in a long, long time, we don’t have to delude ourselves into thinking we could be the ones smiling on the second Monday in March.

Email Jerry at defiantlydutch@yahoo.com or follow Defiantly Dutch at http://twitter.com/defiantlydutch.
Posted by Jerry Beach at 4:02 PM