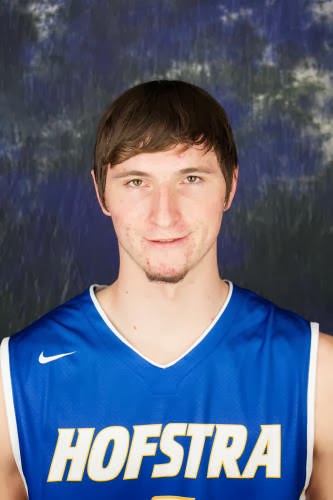 Senior Night at Hofstra Arena tonight will feature Stephen Nwaukoni, who survived four of the most tumultuous years in program history, and Zeke Upshaw, who is merely going to score six times as many points in his one season at Hofstra than he did in three years at Illinois State.

Yet the most unique story amongst Hofstra seniors may belong to Dan Steinberg, whose two points in four minutes over five games thus far represent more points, minutes and games than he played in high school.

Have we mentioned he’s a former team manager who earned a spot as a walk-on when he unknowingly dunked in front of Joe Mihalich?

“The team, all the players, showed up in the rec [center] because they had pick-up there,” Steinberg said. “And I was playing with the regular students. I dunked on someone and coach walked in right before I did that. So I thought it was divine intervention.”

The well-timed dunk capped a four-year climb to the active roster that featured plenty of stops, starts and near-misses. Steinberg, who stands 6-foot-7 but didn’t try out for his high school team in New Jersey despite numerous requests by the head coach, joined the basketball program as a freshman after chatting with former assistant coach Steve DeMeo during a freshman orientation program at the Student Center.

“I always wanted to be part of something that was bigger than myself,” Steinberg said.

Steinberg hit it off with the 2010-11 team and often shot around and worked out with fellow big men Greg Washington and Roland Brown. He briefly left Hofstra after the fall semester in 2011 to attend Division III Kean in New Jersey, where he played two minutes in one game, before returning to Hempstead and resuming his manager role for the 2012-13 school year.

An opportunity to play for the Dutchmen appeared to present itself in November 2012, when the roster was decimated by the arrest and immediate dismissal of the four knuckleheads. But Steinberg’s cameo at Kean left him ineligible to play last season.

Steinberg remained a manager under Mihalich, whose lean roster needed another body. And who but a manager could be better prepared for the anonymous duty of serving as a walk-on?

“I still kind of see myself as an extension of the manager,” Steinberg said. “When people warm up before practice, I’ll just rebound for them. I don’t need to get up shots. They need people like Dion [Nesmith] and Zeke to get up shots as much as possible.

“Even in practice, I only play as much as they need me to, because the players need the reps. The players are going to be the ones out there 40 minutes. I’ll just try to do my best. Same thing as a manager—I tried to help the team as much as I could.”

Of course, there are some pretty big differences between being a manager and being a walk-on. He’s traveled with the Dutchmen all season, a marked change from his time as a manager, when he went to just three road games (the Oregon State game in November 2011 and the William & Mary/James Madison road trip in early 2013).

There’s also a certain undeniable change in perception within the team between a walk-on and a manager.

A player also gets the chance to score in a Division I game, which Steinberg—with his parents watching in the stands—did when he drained a jumper in the final two minutes of the Dutchmen’s 86-67 loss to Fairleigh Dickinson on Jan. 5.

“To be honest, I would have much rather been up 20 than down 20,” Steinberg said. “We got yelled at pretty badly in the locker room after the game. It didn’t matter if I scored two points or 20 points or no points.”

Nor did Steinberg need to score a basket to derive indescribable satisfaction out of completing his unlikely emergence as a Division I player.

The home finale is usually the one chance for senior walk-ons to get extended playing time, if not an actual start, but Steinberg enters tonight unconcerned over how much he may or may not play.

As he has most of the previous four seasons, he will head to the Arena tonight hoping to provide assistance in any way possible, albeit this time delivered from a vantage point experienced by few walk-ons or student managers anywhere.

“To be honest, any minutes that I get is more minutes than I expected at the beginning of the year,” Steinberg said. “So if [Mihalich] puts me in I’ll be ready. And if he doesn’t, I’ll be happy being there.”

Email Jerry at defiantlydutch@yahoo.com or follow Defiantly Dutch at http://twitter.com/defiantlydutch.
Posted by Jerry Beach at 11:57 AM