Nwaukoni continues to benefit from his rebounding skills 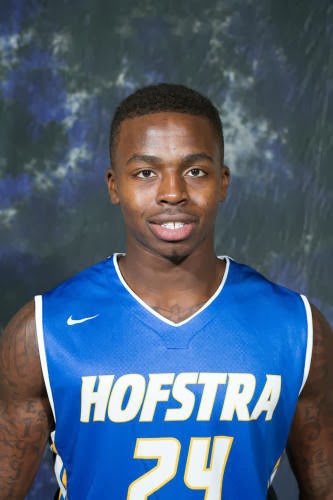 A natural and uncanny ability for rebounding the basketball earned Stephen Nwaukoni a scholarship to Hofstra. When he walks on to the court for Senior Night this evening, he’ll have proven his rebounding skills weren’t limited to the court.

Nwaukoni is the lone member of Mo Cassara’s first recruiting class to play four seasons at Hofstra and the only current Dutchmen with first-hand recollections of the magical 2010-11 season. The last three years, of course, have warranted less flowery adjectives, but Nwaukoni takes—obvious pun alert!—pride in having overcome the rougher moments to spend his entire career in Hempstead, even if he had periods of self-doubt during the most trying times.

“I feel that’s just a natural thought of anybody who’s going through what we and the rest of the guys have been through—why remain in the program if we’re not doing good?” Nwaukoni said. “I stayed with the program and I just tried to work past it, work through it. And I’m glad to say I made it past it. And I’m proud of myself now for actually staying.”

Playing the final regular season game of his career tonight at Hofstra Arena will provide an appropriate punctuation mark to a Division I career born during a pickup game at the Arena during the spring of 2010. Nwaukoni had generated some interest from a handful of lower-level D-I schools but hadn’t found a match in a more competitive league until he visited Hofstra, where his rebounding prowess during the impromptu game impressed Cassara and lead recruiter Steve DeMeo.

He has continued to hone his rebounding skills and became just the 12th player in program history to record 700 career rebounds when he reached the milestone against William & Mary on Wednesday night. His rebounding average has increased in each of his four seasons at Hofstra, from 3.3 as a freshman to 8.3 this season.

Nwaukoni is just the third Dutchmen to reach 700 rebounds in the last 30 years, and while Nwaukoni’s game isn’t as complete as those of Kenny Adeleke (837 rebounds) or Roberto Gittens (809 rebounds), his gift for rebounding is as impressive as anyone who’s ever played at Hofstra.

“No one goes after that basketball as good as him,” Joe Mihalich said.

“I was never really a scorer,” Nwaukoni said. “Essentially, I’ve always had that knack for rebounding. I know where to position myself, I know where the ball’s going, I know how to follow the trajectory of the ball. I just always had it.”

When consistency eludes Nwaukoni—he’s had at least seven rebounds in 23 games this season but four or less in five games—he fires up game footage to examine his flaws.

“There are times where I had a three-rebound night, maybe because of foul trouble or just because I wasn’t playing good, and I’ve watched the film and I notice I should have positioned myself in one area or I should have boxed somebody out,” Nwaukoni said.

Former Dutchmen bigs with far lesser resumes have played professionally, so Nwaukoni’s propensity for rebounding and attention to detail should benefit him as he pursues a career overseas.

“Stephen has that one thing he can do that gets him on the court,” Mihalich said. “He rebounds the ball so well that it gets him on the floor and makes him special and might make him some money.”

“Basketball is not over for me yet,” Nwaukoni said. “Once I graduate, I’m definitely trying to pursue a professional career. Work my [rear end] off, just try and get a contract with an overseas team. That’s the goal.”

In the short-term, Nwaukoni hopes to rein in his emotions tonight, when his entire family and some former coaches will be in attendance for his home finale. He said he expected to see his mind to be filled with the memories, good and bad, of an interesting career at Hofstra that certainly tested his rebounding skills in ways he couldn’t have imagined four years ago.

“I was saying to the other guys it’s been a rollercoaster—freshman year we were winning a lot consistently, sophomore and junior year, we went really downhill,” Nwaukoni said. “I tried to be persistent and I still believed I could do something in this program and help the university out.

“It’s crazy, it’s going to be my last home game. But I can say I’m moving on with no regrets.”

Email Jerry at defiantlydutch@yahoo.com or follow Defiantly Dutch at http://twitter.com/defiantlydutch.
Posted by Jerry Beach at 11:59 AM