To call a game a “must-win” affair anytime before an elimination game is usually folly and/or the work of cliché-spouting reporters who likely begin their “questions” with the phrase “Talk about…” That’s not a question!

But the Flying Dutchmen’s game against UNCW last Saturday was as close to a must-win game as possible in late January. In order to remain on the fringe of the race in the watered-down CAA and provide some hope they can make a little run in March, the Dutchmen, who haven’t won a road game since last January 21, need to win as many home games as possible. This is especially true especially when the opponent also last won a road game last January 21 and didn’t leave for New York until 5:30 AM because of poor weather up and down the east coast.

But the must-win became the latest most frustrating loss of the season (so far) and the Dutchmen became the only team in the CAA without a road win in the last 12 months after UNCW emerged from its Planes, Trains and Automobiles day (see below—how awesome is that?) with a 57-51 win over the Dutchmen. 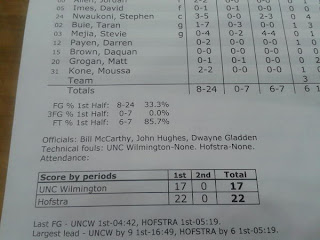 As bad as the loss looks at the surface, it was much worse when viewed up close and once the season-long ramifications were taken into consideration.

“I told our guys tonight was the first time, really, on the new season for us where we didn’t give our best effort,” Mo Cassara said. “And that’s what I’m disappointed in.”

“I felt like we had a chance to kind of put them away in the first half,” Cassara said. “We were up five points, we held them to 17, I thought our defense was terrific. We had a lot of easy shots around the basket, whether a breakaway layup or a dunk or an easy shot, and we didn’t execute.”

That’s putting it mildly. UNCW all but presented the game to the Dutchmen on a silver platter, especially over the final 1:46 of the half. In their last five possessions, the Seahawks turned the ball over four times and missed three shots on the other possession. But the Dutchmen missed all five of their shots in that span and paid the price when UNCW opened the second half with a 12-1 run. The Dutchmen led just once, at 33-32, the rest of the way.

2.) We needed no further proof that guard play wins in the CAA, but while Chris Dixon and Tanner Milson were combining for 39 points and 10 3-pointers (on just 15 attempts) for the Seahawks, Taran Buie and Stevie Mejia endured another rough game with 24 combined points on 6-of-26 shooting, including 3-of-14 from beyond the arc. They also combined for six assists and just 10 turnovers.

It’s not very fair to Buie and Mejia to demand they carry the Dutchmen—Buie is basically playing his first collegiate season while Mejia is far better as a facilitator than a creator—but the lack of guard play behind them means it’s sink or swim with the duo. And during the Dutchmen’s four-game losing streak, Buie and Mejia are shooting a combined 34.8 percent (33-for-95) with 22 assists and 37 turnovers.

“Our Achilles heel right now is turning the ball over,” Cassara said. “You can live with a couple, but it’s those careless turnovers. Our last four games. we’re probably averaging, I would say, 16, 17 turnovers a game [actual figure: 16.8 turnovers]. We’re not going to win, whether it’s at home or on the road, playing like that. That’s been our big issue and we’ve got to find a way to change that.”

3.) The struggles of Buie and Mejia were magnified once UNCW took Stephen Nwaukoni out of the game. For the second straight year, Nwaukoni was the lynchpin of a defensive effort that shut down Keith Rendleman (11 points, six rebounds). And it looked as if he might post his second straight double-double against the Seahawks when he had eight points and four rebounds in a first half in which the Dutchmen racked up 16 points in the paint.

But UNCW played more zone defense in the second half, when Nwaukoni had just two points and one rebound in 13 minutes. While the 10 points were his second-most of the new year, the five total rebounds were his fewest of 2013. All of which is to say he’s been the Dutchmen’s most consistent player, more often than not, during the CAA season and that the Dutchmen need to find a way to keep him involved even when defenses are collapsing on him and Buie and Mejia are struggling from outside.

4.) Cassara’s been forced to go back to basics with the Dutchmen multiple times this season. It likely happened again during practice this week as he drove home the importance of living up to Bruiser Flint’s decree that nobody in the CAA plays harder than Hofstra. Effort is the great—only?—equalizer for the Dutchmen this season, and it lagged when frustrations mounted Saturday. Alas, it almost surely won’t be the last time the Dutchmen get frustrated this year. They’ll need a better response to have any hope of remaining afloat into February.

“We just didn’t have the effort today,” Mejia said. “Just flat out there. When shots aren’t going in, we don’t defend. Frustrating.”

5.) Frustrating week too for the Dutchmen, who blew an eight-point lead against preseason favorite Drexel before…well, you know. Now, with two road games in the next three days and four of their next five away from Hempstead, their already slim margin for error in the CAA has been removed. The Dutchmen are 1 ½ games behind Drexel for the fifth seed and need to find a way to win at least one game on the James Madison-William & Mary trip to avoid falling into an almost unrecoverable hole as the sixth or seventh seed.

“Certainly very disappointed in the outcome today,” Cassara said. “It’s been a long week. We’ve got to get back to work here on Monday and get ready to hit the road again.”

Email Jerry at defiantlydutch@yahoo.com or follow Defiantly Dutch at http://twitter.com/defiantlydutch.
Posted by Jerry Beach at 7:12 PM