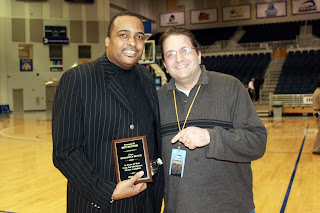 Now I know how to spell meritorious!

I remember the strangest things. For instance, I can tell you right now where I’ve watched the Super Bowl every year since 1981 (at home from 1981-1990, then in 1991 I piled with a bunch of folks into my friend Randy’s bedroom as we watched Scott Norwood’s kick sail wide right, etc etc). But I will very likely forget to put the dishes away tonight, which will annoy my wife.

And so it is that I have remembered, for months, a quote that Ron Hunter, the ever-quotable Georgia State head coach, gave to Mike Litos for Mike’s annual summertime tour through #CAAHoops (this was before Mike moved on up to his unfairly awesome radio/writing gig with VCU, which plays in the Atlantic 10, which I think is a conference that exists only in Mike’s head).

“This is my farewell tour in the CAA,” Hunter said. “How many guys in any league coach one year and get a farewell tour? I want gifts every place I go. I’ll tell them—get me a gift or I’ll take it out on them on the floor.”

Me being me, I immediately decided I was going to get Hunter some sort of gag gift commemorating his success against Hofstra with Georgia State and IUPUI, which beat HU in the 2010 CBI and made me RGDPO’d.

But I never forgot about the gag gift, even if I thought it might not be doable because the Flying Dutchmen were having such a rough season and I didn’t want the gift to be misconstrued as me piling on Mo Cassara & Co.

So at the end of my interview with Cassara Sunday night, I told him about the idea and explained it was all in good fun and not at all intended to denigrate Hofstra. He laughed and got a kick out of it, so I went ahead and picked up the plaque in which Defiantly Dutch honors Hunter for his “long and meritorious service vs. Hofstra” from 2010-2013. 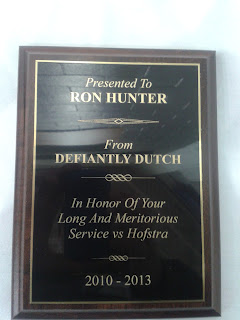 And then I got in touch with Georgia State SID Mike Holmes to see if I could present it to Hunter before or after the game. Since this is #CAAHoops and we all have it better, they were both game for the gag and even agreed to do it afterward, even if that opened up the awkward possibility of giving Hunter an award after his team just lost to Hofstra. But c’mon. What were the odds of that?

Despite Georgia State’s narrow, last-second loss—DID I MENTION THAT HOFSTRA WON AND IS TIED FOR FIRST PLACE IN THE CAA—Hunter was a great sport during the “awards ceremony,” which was captured by Holmes. Hunter seemed quite amused that someone remembered his throwaway quote. Or maybe amused is a synonym for frightened, I don’t know.

Thanks to Hunter and Cassara for being great sports, to Holmes for helping to facilitate our meeting and to Litos for getting that money quote of all money quotes.

Of course, my knack for remembering weird stuff is about to get very expensive. Because now that Hofstra finally has a win—AND IS TIED FOR FIRST PLACE IN THE CAA, IN CASE YOU MISSED ME MENTIONING THAT ON TWITTER A THOUSAND TIMES TONIGHT—I have to go and get plaques for every CAA coach, whether his school is staying in the league or not. Hey Monte Ross, your gift is in the mail, and I hope you like pirated copies of Scrubs DVDs, Tony Shaver.

Email Jerry at defiantlydutch@yahoo.com or follow Defiantly Dutch at http://twitter.com/defiantlydutch.
Posted by Jerry Beach at 11:48 PM

That's awesome how everyone was on board with this.

That's awesome how everyone was on baord with this.

"amused is a synonym for frightened" = your best line EVER