And here we thought we’d seen the Flying Dutchmen lose games in every conceivable way the last two seasons. There were the last-second, tie-breaking baskets surrendered to Florida Atlantic, James Madison and Northeastern last season, along with the one-point loss to Delaware in which the Dutchmen missed three potential game-tying or go-ahead free throws in the final half minute.

There would be more losses the rest of this season, but when it came to method of defeat, we’d surely seen it all. At least that’s what we thought until Wednesday night, when Drexel’s Frantz Massenat sank a double-clutched 50-footer at the buzzer to give the Dragons a stunning 55-52 win.

“As I told [the players] in the locker room, we made some mistakes tonight, a few breakdowns, a few things didn’t go our way but we still managed to tie the game with four, five seconds left,” Cassara said. “And unfortunately that’s the way games end sometimes.”

That’s the way they end for the perpetually and permanently star-crossed, anyway.

1.) For my chameleon-like take on what it was like to be on the winning side of things last night, check out my story for my good friend Josh Verlin over at the City of Basketball Love website. And look right here to see how far away Massenat was when he crushed our souls: 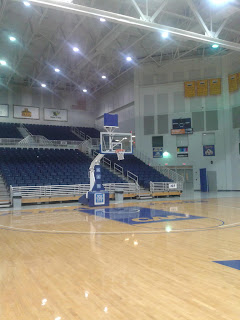 The emotions, of course, were a whole lot different on the Hofstra side. The Dutchmen gave up another sizable second half lead—this one an eight-point advantage with nine minutes to play—and seemed headed for seemingly certain defeat when Stephen Nwaukoni missed a free throw with 38 seconds left and the Dutchmen down three.

But Drexel’s Kazembe Abif threw an outlet pass out of bounds, which set up Taran Buie’s school record-tying seventh 3-pointer with 5.9 seconds left. Which, of course, set up the Dutchmen’s first buzzer-beating loss since Jan. 3, 1995, way back when I was a student and Jay Wright was in his first year as head coach.

Making the last-second defeat even more agonizing for Cassara was the fact Stevie Mejia and David Imes played almost perfect defense on Massenat. After a Drexel timeout, Aquil Younger got the ball to Massenat, who was immediately swarmed by Mejia and Imes. They continued to hound him up the court and briefly swatted the ball away, but the two sagged for a split second, which allowed Massenat to recover the ball, take a step through the opening between the two players, double clutch as if he was trying to draw the foul and launch his shot, which got nothing but net as time expired.

It was like the Charles Jenkins shot, except 15 feet longer and against the good guys. Sigh.

“Once we tapped the ball, I thought we had him,” Cassara said. “I don’t know whether our guys split or gave him too easy of a look, I’ll have to go back and watch it. We double-teamed the ball, made him catch it in front of us, made him bobble it. We did everything we had to do except, obviously, he got too good a look at the basket.”

2.) The Jenkins-esque shot by Massenat negated a Jenkins-esque effort by Buie, who recovered from an awful start to produce a sensational game. Buie lofted some ugly-looking shots, at least two of which didn’t even touch rim, in missing seven of his first eight attempts, but he drained a pair of 3-pointers on consecutive possessions to give the Dutchmen a 23-20 lead with 2:19 left in the first half.

Those baskets began a stretch in which Buie scored 27 of the Dutchmen’s final 35 points, including their final 13 over the last 11 minutes. He banked a 3-pointer to end a 14-2 run by the Dragons and pull the Dutchmen within 50-49 with 1:44 left. His final 3-pointer was a thing of beauty in which he faked going up twice before shooting over the outstretched arm of Drexel’s Derrick Thomas.

“Actually, I was trying to get him to jump so I could maybe get a foul call, maybe get three shots at the line,” Buie said.

Massenat rendered Buie’s one-man effort for naught a few seconds later, but the sophomore’s ability to shake off a bad start and recover—unlike two weeks earlier, when he shot 1-of-11 against Delaware in a 15-point loss to the Blue Hens—could pay dividends for the Dutchmen down the stretch.

“Big credit goes to Taran,” Cassara said. “He started out 1-for-8 and wasn’t have a good night and got a little frustrated. Drexel does that to you, they’re going to hold you and grab you and play physical basketball—typical Bruiser Flint team. And that to me is a sign of maturity and that’s the sign of growing up, to be able to fight through that and then come back and make some big shots for us.”

3.) Prior to the dueling dramatic 3-pointers, this was a classically ugly yet oddly compelling Hofstra-Drexel rockfight that featured plenty of fun mini-storylines. There was plenty of banging down low but just 25 total fouls called and 21 free throws attempted as the referees went the Saturday-morning-at-the-Y-no-blood-no-foul route. The two teams were separated by more than four points just once in the first half and by more than two possessions just once in the entire game.

“Our guys—can’t say it enough, our guys play hard and they compete and we keep finding a way to put ourselves in a position to win,” Cassara said.

While Buie put the Dutchmen on his shoulders over the final 23 minutes, 16 of Drexel’s final 19 points were scored by Damion Lee, who had nine points in a 10-2 run that tied the game at 46-46 with 5:23 left, and Massenat, who scored the Dragons’ last seven points over the final 2:11.

Massenat’s final line (14 points on 3-of-10 shooting, three assists, two turnovers, one block and one steal) won’t jump off the page, but anyone who saw him last night recognized why he’s one of the best players in the league and as vital to Drexel’s success at Matt Janning once was to Northeastern’s.

4.) Buie was the only Dutchmen to score in double figures, but Mejia, Imes and Jordan Allen were all key offensive contributors at different times.

Mejia (eight points, six assists, six turnovers, two steals in 39 minutes) scored all eight of his points in the first 13 minutes of the game. Allen had just five points and a team-high seven rebounds, but his layup and jumper helped fuel the 16-2 run that turned a six-point deficit into a 44-36 lead. And Imes, a week removed from hitting five 3-pointers, had eight points, all in the paint, as well as three assists, one block and one steal.

4b.) Have I mentioned Satan’s team beat the usual representatives of Beezlebub on Wednesday? Crappy night.

5.) The loss removed the little margin for error the Dutchmen earned by opening the conference season with two wins in three games. The Dutchmen have lost three straight, and at 2-4, are facing a must-win game Saturday against UNC Wilmington, which, like Hofstra, hasn’t won a road game in 12 months. After hosting the Seahawks, the Dutchmen visit James Madison and William & Mary, so any hope of remaining in the CAA race—or at least the race for second behind Northeastern—rests on shaking off last night and finding a way to win Saturday.

“That’s part of basketball—the frustration, being upset, is over,” Cassara said. “Now we’ve got to narrow our focus on Wilmington. We’ve got a home game on Saturday, we’re going to get back to work [today]. This is a resilient bunch, they’ve proved it throughout. They’re ready to battle and fight and scratch and claw. It’s not pretty all the time, but we find a way to hang in games and we find a way to stick together. So we’re going to keep doing that and get to work [today].”

Email Jerry at defiantlydutch@yahoo.com or follow Defiantly Dutch at http://twitter.com/defiantlydutch.
Posted by Jerry Beach at 4:30 PM