A new day dawns in the old ECC 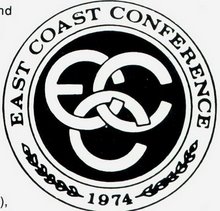 Yes! I get to use this logo again!

And some of these people—no names, of course, but the biggest skeptic is the shiny-domed lead writer for VCUHoops.info—think the ECC is some Inception- or Newhart-esque dream world that exists only in my head or my sleepy subconscious. These people ACTUALLY think that Hofstra, Drexel, Delaware and Towson just MAGICALLY landed in the CAA for the 2001-02 school year!

Well, damnit, we didn’t, and we had a pretty rich history as rivals in the ECC for the better part of two decades before everything went kabloomie and I’m going to keep the ECC alive by referencing it AS OFTEN AS POSSIBLE and keeping track of the ECC standings every year. Or at least every year since I started Defiantly Dutch.

While Hofstra and Drexel have yet to break through SOUTHERN BIAS and win the CAA, they have been far better off for most of their CAA existence than either Delaware or Towson, each of which arrived in the CAA by promptly falling on hard times with a resounding thud and each of whom has been largely dominated by Hofstra and Drexel in head-to-head meetings during the CAA Era.

Hofstra is 33-11 against Delaware and Towson in regular season play since 2001-02 while Drexel is 32-13 against the Blue Hens and Tigers. Not surprisingly, Hofstra and Drexel dominated my mythical ECC the first three years I blogged at this corner of the Internet, during which they went 32-9 in “league” play (which includes non-conference conference games against former ECC schools such as St. Joseph’s, Rider and Buffalo—do you think I’m insane yet?)

But a role reversal has been underway the last season-and-a-half. Delaware finally began stirring last year, when it swept Hofstra for the first time since 1997-98, handed Drexel one of the Dragons’ two conference losses and advanced to postseason play (well, it was the CBI, but for the purposes of this exercise I guess it counts) for the first time as a CAA member.

And Towson’s long-awaited revival finally got underway this year. The Tigers were 1-35 in league play the last two years, haven’t swept Drexel in the regular season since 2001-02 and are 5-28 against Hofstra since Towson the two teams became NAC foes in 1995-96, but they’ve already beaten Drexel and will likely be favored to beat the Flying Dutchmen when the teams meet in Hempstead Feb. 16 and in the Towson Center finale March 2.

Hofstra, of course, has endured over the last two seasons its leanest times since the dawn of the Jay Wright Era. These were supposed to be halcyon days for Drexel, which got screwed out of an NCAA Tournament berth by geography and Selection Committee ineptitude last year and was the overwhelming favorite to win the CAA this year, but a spate of injuries has left the Dragons jockeying for position in the middle of the CAA quagmire.

And so it is that we are reaching the end of January and BOTH Hofstra and Drexel are winless in “ECC” play (a combined 0-4) while Towson and Delaware have two “league” wins apiece. Not only that, but the Dutchmen and the Dragons enter tonight’s game at Hofstra Arena with a combined record of 11-24 (a .314 winning percentage), which is the worst combined record the two foes have ever had prior to playing each other in the Division I era. The previous mark of .346 (9-17 combined) was set way back in the 1990-91 season.

One way or the other, in a game that will likely be played in the 50s (if that), the bottom of the ECC standings will be impacted. Strange days indeed.

Email Jerry at defiantlydutch@yahoo.com or follow Defiantly Dutch at http://twitter.com/defiantlydutch.
Posted by Jerry Beach at 6:02 PM