The Hat is not in this video.

Twelve hours after I became the oldest rookie in WRHU history (blatant yet delayed self-promotion, many thanks to Christian Heimall and Jonathan Lauder for having me on the air) last Friday, Sully Ray became the oldest rookie in the history of our fantasy football league (in which, you’ll no doubt be interested to know, the conference names are Yankee, Patriot and Colonial) when he joined the rest of the Defiantly Dutch readership (and nine other people, too!) at our fine suburban residence.

You’re probably saying to yourself “Didn’t the season start Thursday?” Yes. Yes it did. But really, you’ve got to admit, drafting after the official start of the season makes a lot of sense for a league “run” by me.

Along those lines, Sully Ray had some sharp words as we waited for the draft to begin.

“Beach you were supposed to work all weekend last weekend and you didn’t,” he said in the familiarly admonishing tone of someone who arrives five minutes early for every appointment, pays all his bills two weeks ahead of time and gets his eight hours of sleep from 10 pm to 6 am instead of 8 am to 4 pm. The responsible adult is so boring.

Alas, the boring responsible adult Sully Ray is also right. I have been lax here, partially because of some paying work that was due last week but also because of awful time management skills that should earn me a starring role on some late-night infomercial.

“Hi I’m Jerry Beach, locally famous author and blogger. Before I took Timmy Time’s course, I spent all day surfing the Internet, watching old music videos on YouTube, watching episodes of old sitcoms and soap operas I’ve already seen 100 times apiece, crafting witty status updates on Facebook and obsessing over my fantasy baseball and football teams. My blog posts were made during caffeine- and exhaustion-fueled bursts in the middle of the night. But one day with Timmy Time has me working a regular 9 to 5 schedule, limiting my television viewing to live sports and living an otherwise productive existence! Thank you Timmy Time!”

Where in the hell was I? Oh yes. Anyway, please accept my humble apologies for the tardiness of posts this month as well as the declaration that I’ll try to be more on top of things. It’s no fun watching Extreme’s “Hole Hearted” and worrying the song was written about me, even if I was 16 when the song was written.

With that, let’s get to the news of the past few days:

— An out-of-town trip for Labor Day weekend and an imploding car, respectively, made it impossible to attend either of the Flying Dutchmen’s first two football games, so I’m not going to sit here and pretend I’m some expert on what transpired. I will say that the wins over Stony Brook and Bryant seemed to go about as well as possible for the Dutchmen, who never trailed in dispatching of the Seawolves and Bulldogs and escaped the games mostly unscathed, injury-wise.

Still, the 2-0 start doesn’t seem to have filled the faithful with optimism. Perhaps it’s because the Dutchmen are supposed to beat Stony Brook, against whom they are 12-0 all-time, and a fledgling I-AA program such as Bryant. Or maybe it’s the specter of upcoming road trips to top-ranked Richmond, the defending I-AA national champion, and I-A Western Michigan and the possibility of back-to-back unmitigated floggings.
My hunch is the Dutchmen are, for the most part, playing with house money the next two weeks. A split would be outstanding (let’s not even get into the 1994-like euphoria a sweep would inspire). And going 0-2 won’t extinguish their playoff hopes, as long as the losses are reasonably competitive and not of the James Madison variety.

For the sake of a program that needs all the momentum it can get, here’s hoping the next two games provide some encouragement for the Dutchmen as well as some reason for Long Islanders to come out to Shuart Stadium the first two weekends in October. Otherwise, the bridge to basketball season could be a bleak one.

—Speaking of basketball, your good friend and mine Mike Litos has already begun unveiling mini-previews at his site, and the school batting leadoff in his series is also the school he’s picking to win the whole darn thing. I won’t ruin the suspense by revealing the team here (click the link!), but I will say it’s not Hofstra.

I’d like to threaten to unleash the full venom of Dutch Nation (snort) upon Litos for not picking the Dutchmen first, but the truth is, as evidenced by this pre pre-season poll conducted by the fine folks at VCURamNation.com, we’re in agreement. Of course, I only picked against Hofstra to ensure I wouldn’t hex them. Yeah. That’s the ticket.

—Interesting stuff, too, from Litos last week about the future of the CAA. We’re in agreement that a football conference that is almost laughably better than the rest of the I-AA field will determine the direction of the CAA, but while Litos foresees a I-AA landscape in which the CAA is the dominant football and basketball conference, I still wonder if the CAA will try to ride a handful of programs that could support I-A football into a seat at the big boys’ table.

Litos’ theory that the BCS schools will run away and hide sometime next decade, thereby allowing the NCAA to finally shed any pretense of equality and divide Division I into a I-A and I-AA, is something I’ve wondered about myself the last few years. But I change my mind on an hourly basis as to what it would mean to potential I-AA program such as Hofstra.

On one hand, it would be nice to have a legitimate chance to compete for a national championship, albeit a less glorified one. But I also remember the blank stares I got when telling friends about Hofstra’s outstanding I-AA football program in the mid-90s and how frustrating that was. Apparently, the carrot that lures one to Hofstra as a teenager remains just as dangly and attractive in his mid-30s.

Plus, as much as it sickens me to type this, George Mason proved in 2006 that it is still possible—bloody unlikely, but still possible—for a mid-major to overcome the odds and the obstacles placed in its way and crash the party. Of course, it also helps to have a crooked athletic director on the Selection Committee, but I digress. Why rob the rest of the mid-majors of that once-in-a-generation opportunity just to help the obscenely rich get even more obscenely rich? (Because college basketball is life, that’s why)

—It wasn’t a good opening week of the season for the Tampa Bay Buccaneers, the official NFL team of Defiantly Dutch, but Newsday ran a nice feature on new Buccaneers coach Raheem Morris, who tells the newspaper he is less than a decade removed from hoping he could someday become the defensive coordinator at Hofstra.

—Lastly, I’ll end where I began with our fantasy draft, because I’m sure you want to know about my fantasy team as much as I want to know about yours, and let you know that while I may be an inconsistent blogger, I am consistent when it comes to following my own fantasy football advice. That’s right, I drafted the Colts’ Donald Brown, a mere 54 weeks after he carved up the Dutchmen in UConn’s 35-3 win.

Watch out world and watch out Sully Ray, who was in such a hurry to leave a draft that lasted several hours beyond his bedtime that he left his sharp Bethpage Black U.S. Open hat here. Sully Ray wrote me earlier today with a brief but forceful request: “Don’t wear my golf hat.”

Apparently, he’s forgotten how I infuse non-descript hats with character as well as world-wide fame. 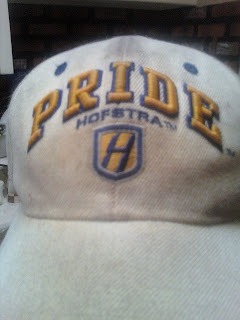 Fine, Sully Ray. I’ll trade you your hat for Cowboys wide receiver Roy Williams. Otherwise, the hat and I are going on the road with Extreme.

Email Jerry at defiantlydutch@yahoo.com or follow Defiantly Dutch at http://twitter.com/defiantlydutch.
Posted by Jerry Beach at 11:57 PM