Payback is a Bonus 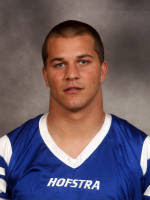 Every single time he trots out to the practice field, Hofstra middle linebacker Luke Bonus recalls how he felt during December 2004, when the high school senior was told by then-Hofstra coach Joe Gardi that the school—the only one to even minimally recruit the undersized Bonus, who is listed at 5-foot-10 and 205 pounds—was no longer planning to offer him a scholarship but that he was still welcome to apply to the university and walk on to the football team.

“Most every school I’m playing against was a school that said I couldn’t hack it,” Bonus said. “Including the one I’m at. So I come out to practice with a chip on my shoulder.”

Gardi retired after the 2005 season, which Bonus spent on the sidelines as a redshirt freshman, and his replacement, Dave Cohen, not only made Bonus a starter but also granted him a full scholarship prior to the 2006 season. Still, if Bonus gets fired up for practicing for a coaching staff and against a bunch of teammates who had nothing to do with his recruitment—or, as Bonus calls it, the “lack thereof”—imagine how he’ll feel Saturday, when Hofstra visits top-ranked Richmond.

An ex-Richmond coach has a pretty good idea of what’s in store for the Spiders. Bonus took great pleasure the previous three seasons in tweaking former Hofstra defensive coordinator Mike Elko, who now serves in the same capacity at Bowling Green and was on the Richmond staff when Bonus was in high school.

“I used to like to tell him, because he was at Richmond before I came here, ‘I love playing for you because you didn’t recruit me,’” Bonus said Thursday. “So everyday, I’m getting to prove him wrong. Every game is something to me that I have to prove to somebody. Every team that I look at on our schedule is a team that said I wasn’t good enough, [that] I couldn’t hack it. And I love it. It’s something I get to go out on the field with every day. I don’t need any extra inspiration.”

Bonus’ emergence from walk-on to All-CAA player and All-America candidate is remarkably similar to the story penned at Hofstra in the early ‘90s by Wayne Chrebet, who put Hofstra on the map when he followed a brilliant senior season with the Flying Dutchmen in 1994 by making the Jets as a rookie free agent the following summer and eventually becoming one of the most successful and beloved players in franchise history.

Long before he was a household name, though, Chrebet was an undersized New Jersey kid whose football career almost ended with his high school graduation because even Division I-AA programs would not look beyond his unimposing 5-foot-10, 180-pound frame. Chrebet’s father sent tapes of his son to several area schools and Hofstra—which was years away from awarding football scholarships as it began the transition from Division III to Division I-AA during Chrebet’s freshmen year in 1991—finally offered Chrebet a chance to play.

Bonus’ father also sent footage of his son to Hofstra and other schools, but Bonus—who earned all-state honors in New Jersey as a senior and holds the Shawnee High School record for career tackles—was ready to leave football behind when it looked like the opportunity to earn a scholarship to Hofstra had disappeared.

Pep talks from his parents convinced him to give it a year, but like Chrebet—who caught just 36 passes for 309 yards his first two seasons and pondered transferring—Bonus didn’t get much of an initial opportunity. He thought about quitting once again after a frustrating redshirt freshman season in which he was shifted to safety but decided to give it one more season after Cohen arrived and moved him back to linebacker, where he won the starting job during training camp and immediately began paying back the programs that ignored him a couple years earlier.

Bonus led Hofstra in tackles as a freshman and a junior, earned All-CAA honors last year and has collected 10 or more tackles 14 times in 37 career games, including last week against Bryant. He was named team MVP last year and selected a captain this season as much for his passion and production on the field as his efforts off it: Bonus has been named to the conference’s all-academic team in each of his three seasons.

“He just plays snap to whistle as hard as anyone I’ve ever coached,” Cohen said. “He’s just relentless. He’s very bright, he’s over a 3.2 [GPA] student, he’s a complete person. And then you add that relentlessness, that motor that never stops, it just creates someone very fun to coach.”

Now, the guy who needs no extra inspiration may be on the verge of providing some, a la Chrebet. Bonus was just eight years old when Chrebet played his final game at Hofstra, but he was familiar with Chrebet’s tale long before he began following in his footsteps. As a teenager in 1999, Bonus read Chrebet’s autobiography Every Down, Every Distance.

“You always heard about Wayne Chrebet, a small kid, this school Hofstra,” Bonus said. “And then everyone was saying ‘What’s a Hofstra? What is Hofstra?’ But it was always kind of how I knew about it. [It was] a turning point for me to really look at this school.”

Bonus met Chrebet during his redshirt season in 2005, when Chrebet would occasionally stop by practice during his final year with the Jets. “It’s the ultimate complement, man, [for] someone to tell me that I’m compared to someone like Wayne Chrebet, who is obviously a legend at this level [and] especially at this school,” Bonus said.

Between Bonus’ resume and the success of Chrebet and other recent Hofstra alums in the NFL, there seems little doubt Bonus will elicit some interest in the months leading to April’s draft. He may not have to take a Chrebet-path like to the NFL, but the slights of 2004 and 2005 will nonetheless keep Bonus as hungry as ever.

“I think that the walk-on process, as tough as it is, I really believe it’s a great gauge for people,” Bonus said. “When I first came in, I didn’t get the feeling that I was needed here, you know what I mean? I didn’t get that feeling at all. But I grinded through it and obviously I worked my way to the top.”

Sully Ray here, The story of Bogarts is true. Jerry was a couple of weeks shy of 21 and the NCPD came in asking people for ID. The rest of our table was over 21 and Jerry was sitting in the corner of our booth freaking out, I think possibly wearing his bloody sneakers from his summer job. Oh man, had the cops seen those sneakers there would have been some DNA testing done.