Fifteen years ago this week (and last week and the week before that, too) 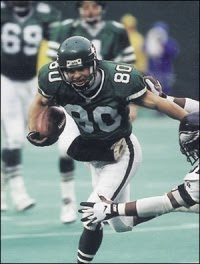 Wayne Chrebet would have a lot more people to talk to than just me and two guys from Newsday by the fall of 1995.
One of the things I planned to do this fall was to take a look back at the 1994 Flying Dutchmen football season by recapping the games as they unfolded 15 years ago. I thought it would be a cool way to kind of measure how the momentum built that season, from a pre-season in which Joe Gardi expressed quiet confidence to a perfect September to an October in which the unbeaten Dutchmen surged into the national rankings and into the playoff picture before a heartbreaking loss to Towson and, finally, a November that began with long-shot playoff hopes and ended with the unforgettable tie at Delaware.
Of course, me being me, here it is, mid-to-late September, and that feature has yet to debut. But today’s the day! Hey give me some credit. At least it’s not November yet.
It was 15 years ago today the Dutchmen beat Fordham, 30-20, at what was then called Hofstra Stadium, so we’ll start with that game and also recap the first two games of the ’94 season. I’ll add quotes to note and other random memories of the games when I have them, which should be for every contest except the season opener at Butler, when the Dutchmen were pounding Butler while I was pounding beers and dodging the cops busting underage drinkers at Bogart’s. That’s actually true, by the way. Ask Sully Ray.

QB Carlos Garay accounted for more than 300 yards in total offense, but the story of the day was the Dutchmen defense, which forced six turnovers. Herve Damas returned a fumble 13 yards for a TD and the Dutchmen mounted scoring drives after three other turnovers. Safety Pat Clark had two interceptions, increasing his season total to five after just two games, and Marcellus Payne also recovered a fumble. Garay threw for 208 yards and one TD—a 33-yarder to Wayne Chrebet—and also rushed for 106 yards and another score. WR Michael Wright and RB Haywood Cromartie (136 yards rushing) had TD runs.

Quotable: “Forcing turnovers and converting them is a sign of a good team. It’s nice to see us putting points on the board after opponent’s turnovers.”—Joe Gardi

WR Michael Wright scored three TDs—two rushing and one receiving—and the Dutchmen recorded the program’s first road shutout of the Division I-AA era in blanking Butler. Wright caught an 11-yard TD pass from Carlos Garay, who was making his first start since Sept. 19, 1992 against James Madison, and made his only two carries count by rushing 13 yards and 36 yards for scores.

Quotable: “So far this year, I’m very excited about our offense. We’ve moved the ball in practice this year as well as we have in the last five years. We’ll score a lot of touchdowns.”—Joe Gardi previewing the Dutchmen in the week prior to the Butler game

“We’re not thinking of anything but winning. We’re not making predictions, but we know we can be a good football team.”—Gardi