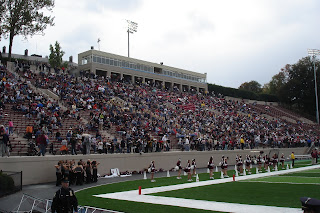 Fifteen years ago today, the Flying Dutchmen traveled to Fisher Field and made Lafayette pay for its pregame shenanigans.
Editor’s note: “Fifteen years ago today…” is a feature we’ll be running all fall at Defiantly Dutch as we look back on how the unforgettable 1994 football season unfolded. I’ll add quotes to note and other random memories of the games as well. Our first entry, in which we reflect on the games against Butler, Bucknell and Fordham, can be found here. Today: A recap of the 27-6 win over Lafayette Sept. 24.
Sept. 24, 1994
Hofstra 27, Lafayette 6

“[The Dutchmen are] a damn good football team.”—Joe Gardi

Other random memories: I didn’t cover this game—I was home that weekend for my birthday, I think—but Nick Renzetti’s game story in The Chronicle alludes to some funny business perpetuated by Lafayette coach Bill Russo, whose decision to hold a practice at Fisher Field the day before the game forced the Dutchmen to get to Easton hours earlier than they’d anticipated. “There was a lot of foreplay involved before that game,” Gardi said. Thanks for THAT visual, Joe.

With the win, the Dutchmen “moved” to no. 43 in the I-AA poll with 13 votes. Not to play spoiler or anything, but I’m willing to bet you they got a lot more votes a week later.