Of all of Greg’s Gigs, Hofstra remains closest to his heart 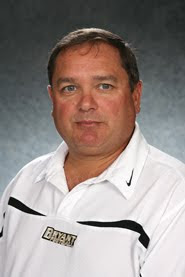 “I’ve got two of my linebackers in my office,” Gigantino said last Friday, a day before the Flying Dutchmen beat Bryant 40-24 in Rhode Island. “And I’ve got a picture of [Gene] McAleer, Jimmy Shannon, Jon Evjen, Pat Clark. They’re looking at them and I’m telling them about them. All those guys—they came with no scholarships and they turned out to be really good players.”

There will probably never be another experience quite like the Hofstra one for Gigantino, who arrived in Hempstead with Joe Gardi in 1990 and helped oversee the Dutchmen’s rapid transformation from a national championship contender in Division III to a powerhouse Division I-AA program.

But Gigantino finds plenty of familiarity as the defensive coordinator at Bryant, where the entire athletic program is in the process of moving from Division II to Division I. The Bryant football team, which began play in 1999, is a member of the Northeast Conference and will eventually offer 40 scholarships (the I-AA maximum is 63).

“The biggest difference is we didn’t know where we were going when I was at Hofstra,” Gigantino said. “We know we’re going into this league and what the parameters are going to be.

“We’ve got a president that’s like Jim Shuart: He’s a football guy and wants to do good in football and he understands what it’s going to take,” Gigantino said. “Obviously, we’re in the midst of moving all our sports up, so it’s a little more of a financial burden than at Hofstra. All we were doing was moving football up [to Division I], everything else was already there.”

Bryant has experienced immediate success, albeit not the sensational type Hofstra enjoyed in the early-to-mid 1990s, when the Dutchmen went 12-8 while playing partial I-AA schedules in 1991 and 1992 and 24-6-2 with one playoff berth during the program’s first three full seasons at I-AA from 1993-1995.

Bryant reached the NCAA Tournament in each of its last two seasons at Division II before it went 7-4 last year in its first season as a I-AA program, including 5-4 against I-AA foes and 4-2 against the Northeast Conference. The Bulldogs improved dramatically as the season went on: They went 4-1 in their final five games overall, during which they lost only to nationally ranked UMass and outscored Robert Morris, Duquesne, Iona and St. Francis 90-24.

As encouraging as such performances are to Gigantino, he remains aware of the long road still ahead for the Bulldogs and how patient he and the rest of the staff—which features another ex-Dutchmen assistant in quarterbacks coach Mike McCarty—must remain.

“You’ve got to know your limitations,” Gigantino said. “Philosophically, you can’t ask guys to do things they’re not capable of doing. A lot of defenses look good up on the board, but you’ve got to say ‘Can our people really do this?’”

Had things gone as Gigantino planned earlier this decade, he would have succeeded Gardi as head coach and stood on the other side of the field Saturday at Bryant. Still, despite the bittersweet nature of the reunion, Gigantino remains fond of Hofstra and the extended period of time he spent there. Gigantino spent 13 seasons at Hofstra (1990-97 and 2001-05 with three seasons as Cornell’s defensive coordinator in between), by far his longest stint at one school during a 32-year coaching career that has taken him to eight stops up and down the east coast.

“You can’t be somewhere for 14 years and not have some memories of it, one way or the other,” Gigantino said. “The way coach Gardi always treated me was just unbelievable. Jim Shuart and Joe Margiotta and all those guys, they were all great people that gave Greg Gigantino a chance.”

Labels: Greg Gigantino, Where are they now