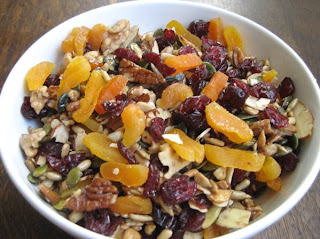 Mmm. Those pineapple bits and the Dutchmen's CAA Tournament hopes look...so....*gulp*...good.
When it comes to anticipation-filled Februarys, we’ve had it pretty good here since I foisted Defiantly Dutch upon the world prior to the 2008-09 season. Three years ago, the Dutchmen remained in contention for a Friday bye until the waning moments of the season (a feat which, in retrospect, probably should have been enough to get Charles Jenkins’ jersey retired as a sophomore). Two years ago, the Dutchmen’s hopes for a bye were extinguished by the end of January thanks to a 2-7 start, but an 8-1 finish raised hopes they could beat the odds and emerge from Friday to win the title on Monday. And last year, of course, was the year Jenkins took over the world and locked up a bye shortly after Valentine’s Day.
So on one hand, enduring a season like this—in which we are left to ponder which seeding and potential Friday matchup gives the Dutchmen the best chance of winning a game or two OR FOUR—is a reminder of how fortunate we have been and to appreciate the good times because you never know when you’re going to be 2-11 the day before the Super Bowl.
On the other hand, it kinda sucks, and is pretty much the equivalent of sifting through trail mix after all the peanuts, raisins and imitation M&Ms have been consumed. (You, on the other hand, may like almonds, cashews, sunflower seeds and other silly healthy stuff, so your mileage on this analogy may vary) Sure, you’ll manage to spin what you find as delicious, or at least edible. But really, it’s not very good at all.
But we can’t help it that the fates are kicking Hofstra’s ass this year and that Drexel, George Mason, VCU, Old Dominion and Georgia State are hoarding all the good trail mix, so here we are: Five games and a blasted Bracket Buster to go in the regular season and hanging on to whatever shreds of desperate optimism and funky, convoluted, bottom-feeder tiebreaker scenarios we can muster. Like these!
—First of all, any hope the Dutchmen have of playing beyond Friday rests on avoiding VCU or Georgia State like the plague. The Rams and Panthers have handed the Dutchmen all three of their double-digit CAA losses and swarming defenses are just terrible matchups for the Dutchmen.
Fortunately, the standings seem likely to shake out so that the Dutchmen avoid either squad on Friday. The Dutchmen are almost certain to avoid last place—and a noontime date with the fifth seed—thanks to their win over Towson.
VCU is tied for first place and the Rams need just one more win to assure no worse than a fifth-place finish. Georgia State is currently in fifth and is well-positioned to finish no lower with a schedule that includes home games against Northeastern, Delaware and Old Dominion, all of whom are over. 500 in CAA play, and roadies at sub-.500 James Madison and William & Mary. The Panthers can all but assure they finish at least fifth by beating Northeastern and Delaware this week, wins which would put the Fighting Ron Hunters at least two games ahead of both squads with three to play.
—As of this typing, the Dutchmen can finish no higher than seventh. But they will be eliminated from seventh-place contention with another win by Delaware or another loss by the Dutchmen. So let’s just assume that’s going to happen and concentrate on eighth through 11th place.
—History suggests 10th or 11th is the best place to finish for a sub-.500 team hoping to salvage some—wait for it—pride with a tournament run. The 11th seed has won its opening round game in each of the last three seasons and a double-digit seed has won at least one game in the tournament in four of the six seasons since the CAA expanded to 12 teams.
And since the first round of expansion in 2001-02, only three teams seeded in the bottom half of the tournament have advanced to the semifinals. Two of those—10th-seeded Hofstra in 2002 and 11th-seeded Towson in 2009—were double-digit seeds. So you’re saying there’s a chance…
It makes sense that the 10th and 11th seeds have a better chance at making a bit of a run. Those seeds are on the opposite side of the bracket from the top seed, so the 10th or 11th seed can’t face the favorite until the final. And the less distance there is between seeds, the more even the matchup. An 11 over a 6 is a legit upset, but a 10 vs. 7 game is closing in on a toss-up.
In addition, each of the last two teams to win as the 11th seed were expected to fare far better but endured a season filled with rotten luck. William & Mary was picked to finish eighth last year but lost seven CAA games by six points or less (gee, sound familiar?). Two years ago, James Madison was predicted to finish fifth but suffered a spate of injuries and lost seven CAA games by six points or less (I swear I am not making this up—go look here).

—So what are the odds the Dutchmen finish 10th or 11th? Right now, they technically hold the 10th seed over William & Mary thanks to a higher RPI. The Dutchmen and the Fighting Bill Lawrences will likely decide who finishes 11th when they face each other for the only time this season Feb. 22.

But can the Dutchmen finish higher—and end up in that purgatory that is eighth or ninth, where a win on Friday means a quarterfinal game with the top seed 24 hours later?

Even if the Dutchmen get swept this week, Delaware—which, as you no doubt remember, beat the Dutchmen by one point in Delaware in a game in which the Blue Hens never trailed—presents another potentially winnable game for Hofstra. I’m also assuming wins over William & Mary and UNC Wilmington, the latter in the Senior Day home finale (the Dutchmen haven’t lost a Senior Day game since 1995-96—MY senior year, for God’s sake).

James Madison (3-10) has two games left against Towson, two games against Drexel and one against Georgia State. While there’s no telling what the unpredictable Dukes will do, let’s assume they sweep the Tigers and lose the other three. The Dutchmen and Dukes split the season series, but if the two teams end up tied at 5-13, the Dutchmen would almost surely win the second tiebreaker and the higher seed by having beaten a higher-seeded team than James Madison, whose five wins in this scenario would all come against teams finishing eighth or lower.

—However, all hope of finishing 10th is not lost if the Dutchmen finish 5-13. UNC Wilmington (5-8) could fall into a three-way logjam for the eighth through 10th seeds if it loses its final five games. And that’s certainly possible: The Seahawks are reeling, with seven losses in their last nine games and freshman starter K.K. Simmons suspended indefinitely. And their schedule is plenty challenging: UNC Wilmington hosts co-leaders George Mason and VCU and visits Delaware, Old Dominion and Hofstra down the stretch.

The two teams split with each other under this scenario, but as long as the Dutchmen don’t beat Mason or Drexel, the Seahawks would almost certainly win the tiebreaker thanks to having more wins over teams ahead of them in the standings than the Dutchmen. While the Seahawks and Dutchmen would each have a win over Delaware, the Seahawks’ win over Northeastern would catapult them into ninth—and leave Hofstra in 10th, where it can quietly lurk before embarking upon the greatest comeback in CAA history.

There you go. Simple, right? And don’t worry. If the Dutchmen finish eighth or ninth—either because I miscalculated my tiebreaker scenarios or because they show blatant disregard for my late-night work by winning their way into the higher seed—well, then I will come up with reasons why those trail mix remnants are the tastiest ever.