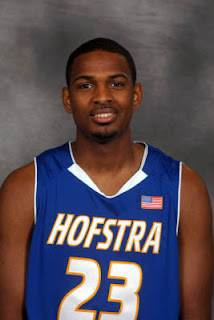 Mike Moore, who calls himself one of the “grandpas” of the Hofstra campus, felt every bit the ancient fifth-year senior as he exited the showers following a 30-point, three-steal performance in the Flying Dutchmen’s 81-69 win over Siena last Saturday.

But before Moore could stretch out and relax in his dorm room, there was a game of 1-on-1 to be played with a 6-year-old. Jair Mathis, the son of Moore’s late friend T.J., drained plenty of shots from just inside the foul line at the home basket, even though he insisted Moore—who was sporting a wide smile the entire time—defend him by raising his hands.

“I really see a lot of his father in him. Real fiery competitor, he doesn’t want any handouts. I think he’s going to be a really good kid. I can see a bright future for him.”

It’s a future Moore hopes to have a part in shaping, both as a way of paying tribute to a fallen friend as well as a way of beginning to provide for African-American children the type of foundation he received from his elders as a child growing up in New Haven. Connecticut.

Part of that foundation was provided by T.J. Mathis, who was shot to death in New Haven last Sept. 3. Moore began taking basketball seriously as an eighth-grader, when he held his own in pickup basketball games against other New Haven-area stars such as Mathis.

And while Mathis graduated from Hamden High School just two years before Moore graduated from Hillhouse High School after one of the most successful careers in Connecticut scholastic history (Hillhouse went 54-1 and won consecutive state titles in Moore’s final two seasons), Moore continued to view Mathis as a mentor and role model even as they went on to become college basketball peers and teammates in Connecticut summer basketball leagues. Just hours before Mathis died, he and Moore were at a restaurant celebrating their team’s championship in the Hartford Pro-Am.

“It’s funny: I told his Mom sometimes I catch myself [thinking] what would T.J. do in a situation?” Moore said. “I always looked up to him as a person—his character, how he was somebody you always wanted to be around. I just try to be like that everyday. If I hear somebody talking, I try to be nice, give them a T.J. response. He always put smiles on faces.”

“Honestly, he was one of the best dudes I knew. Just a good all-around guy, good intentions, just a nice guy to everybody. I never really saw him arguing with anybody. He was just a genuine person to be around. Always made you feel good.”

Like Moore, Mathis was someone who steered clear of what Moore called the “negativity” of New Haven and remained focused on playing basketball and parlaying it into an opportunity to earn a college scholarship. Mathis played two years at Morgan State before finishing his career at Division II Mercyhurst.

Moore isn’t shy about expressing his fondness for his hometown, but the randomness and suddenness of Mathis’ death initially had Moore wanting to get as far away as possible from New Haven and its increasing amount of gun violence. The FBI ranked New Haven as the fourth-most violent city, per capita, in America in 2010, and Mathis’ murder—which remains unsolved—was the 25th in New Haven in 2011, making it the deadliest year for the city since 1994.

“After that happened I just had so much anger towards New Haven,” Moore said. “Such a senseless killing, such a good guy. That one really hit home. I knew people that died before, but to lose somebody like him to gun violence—it just had me really upset. I was thinking I’m never going back there. I just didn’t want to go back. I just wanted to move away.”

A few weeks of discussions with his Mom and Mathis’ mother, as well as regular visits to church, helped soften Moore’s feelings and rekindle his original desire to return to New Haven once he’s done playing professionally and offer, as a teacher and a coach, the type of inspiration and direction he received in his formative years.

Moore, who graduated last May with a bachelor’s degree in history and is pursuing his master’s in education, had little contact with his Dad growing up but had plenty of father figures and people looking out for him, both within the New Haven basketball community and the Westville Manor housing projects in which he lived until he was 13 years old.

“I want to go back and educate the youth because I think [there’s] a lot of misguided youth and not enough great father figures or just role models that you can look up to,” Moore said. “I think that people look up to me where I’m from as a positive young black man. I just always had that reputation growing up in New Haven, so I think I could go back and the kids would really listen to me.

“I’ve got a couple cousins that are in the streets, but they always look up to me, they always listen to me when I tell them they’re not doing something right. I think the youth would really respect my opinions.”

The first person Moore is trying to impact is Jair. Moore is quick to note he’s not the only one of Mathis’ friends watching over Jair, but having a positive influence on Jair brings some peace to Moore, especially after he and Mathis spent much of their last day together talking about Jair and how quickly he was growing up.

“The only thing I can hear him saying is ‘Just make sure my son is OK,’” Moore said. “I can never replace T.J. as his father, but I just want to be there in his life [and] guide him the right way.

“Where we come from is not the rosiest of places—I know it can be tough,” Moore said. “I just know I had a lot of mentors in my life. My father wasn’t really in my life too much, but I had a lot of great father figures, guys along the way who just showed me the right way. I just want to be one of those guys for little Jair. I’m pretty sure he has a lot of other people that have his best interests at hand. I just want to show him the right way, on and off the court.”

Jair has a basketball game of his own Saturday but will likely be in attendance at Hofstra Arena just prior to 4 p.m., when Moore will be one of three seniors honored prior to the Flying Dutchmen’s home finale against UNC Wilmington. The festivities will be one of the final acts in a collegiate career that has not lacked for intrigue.

Moore transferred to Hofstra after two seasons at Fordham, and while he has scored more than 1,500 points—including more than 1,000 at Hofstra, a figure only one other transfer has reached—and will almost surely win the CAA scoring title this year, he has endured three losing seasons and two 20-loss campaigns and played under four different coaches, two of whom never actually coached him in a game. One of those coaches, of course, was Tom Pecora, who left for Fordham after Moore’s redshirt season in 2009-10.

Moore admits he’s been frustrated plenty of times as a collegian but that the events of the past five years have sharpened his focus—and that the death of T.J. five-plus months ago put the turmoil of his career in perspective.

“I think it’s made me tougher—a lot of this made me tougher,” Moore said. “A lot of kids probably would have broken down after transferring [and] going through coaches. I can’t control that. A lot of things in life you can’t control. You can’t worry about coaches getting fired or what coach is getting hired or leaving. Just do what you can do.

“I tell people all the time: ‘Hey, it could be worse.’ That’s what I’ve learned in life. Basketball, it’s a game you love—we grew up learning to love the game—but definitely, at the end of the day, life is way more important.”