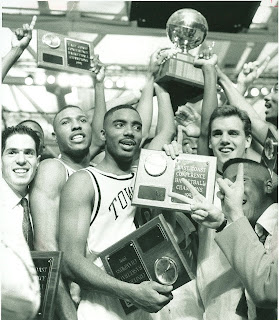 Towson State celebrates after winning the second of the Tigers' three straight ECC titles and earning the league's final automatic bid to the NCAA Tournament in 1991. Photo courtesy of Towson athletics. (PS: Told you the ECC existed, Litos!)

The suburban Baltimore school was the roadblock the Flying Dutchmen basketball team could not get past in the waning days of the East Coast Conference. From 1986-87 through 1991-92—in what amounted to the ECC’s final six seasons—Towson State reached the league title game five times, finished first or second in the regular season four times, earned the ECC’s final two automatic bids to the NCAA Tournament in 1990 and 1991 and won the final three conference tournaments.

Towson State dominated Hofstra over that span, during which the Tigers won 12 of 13 meetings—including 10 in a row at one point—and continually stymied the best teams Butch van Breda Kolff put together in his second stint on the Hofstra sidelines.

Towson State swept the season series from the Dutchmen in 1989-90, when the Tigers won at the buzzer in Maryland and knocked off Hofstra on the final weekend of the season, to win a three-way tiebreaker with Hofstra and Lehigh for the top seed at 8-6. Hofstra finally snapped its winless streak against the Tigers in 1991-92, when the Dutchmen won the ECC regular season crown, but Towson came back from a 9-0 deficit (hmm sounds familiar) to win the conference title game and end the Dutchmen’s NIT hopes.

Lately, of course, it has been Towson (the State was dropped as part of a rebranding effort in 1996) on the receiving end of dominance—from Hofstra and everyone else. Entering tonight’s game at Hofstra, the Flying Dutchmen have won 27 of the last 32 meetings between the two schools, including the last six dating back to 2008 as well as a streak of 11 in a row from 1996 through 2001.

Towson has spent the last 14 months bottoming out following 15 years of mismanagement. The Tigers became the first CAA school to go winless in league play last year, when they lost their final 19 games of the season, and opened this year by losing their first 22 to shatter the previous record for longest losing streak in Division I history before they edged UNC Wilmington, 66-61, Saturday.

Its recent win aside, the program that was once set the standard in the ECC is now the object of sympathy among rival CAA fans, all of whom root for Towson yet none of whom want to suffer the stigma of losing to the Tigers. It is worse nationally for Towson, which is a cheap punch line for the likes of pseudo comedians such as SportsCenter anchor Neil Everett, who compared the Tigers’ losing streak to his Little League hitless streak, and elitist guardians of the game such as Seth Davis, who declared recently Towson has no business being in Division I.

And to make matters even worse, those who mock Towson often further insult the Tigers by referring to the school by an outdated or downright incorrect name.

“We’re not ‘Towson State,’” athletic director Mike Waddell said. “We’re not ‘Townson.’ We’re Towson. And that’s OK. Right at the heart of the word ‘Towson’ is the letter ‘W’ and that’s what we plan on putting a lot up in the next few years.”

In retrospect, Towson’s descent began with a decision made while the Tigers were still racking up plenty of wins. Even 20 years later, it is difficult to argue Towson shouldn’t have left the crumbling ECC for the Big South Conference, which had the automatic bid the ECC no longer possessed.

But the ECC and its natural geographic rivalries was a perfect fit for Towson, which, during the league’s heyday, could travel everywhere except Hofstra without needing an overnight stay. Towson ended up spending just three seasons in the Big South—during which it won two regular season crowns—before rejoining fellow ECC alums Delaware, Drexel and Hofstra in the North Atlantic Conference for the 1995-96 school year. But the program’s fan base and recruiting base were each badly damaged.

“Any momentum we gained during our ECC seasons disappeared,” said Towson media relations director Dan O’Connell, who has been at the school since it moved to Division I in 1979. “We went from playing schools like Bucknell, Delaware, Drexel, Lafayette, Hofstra and Rider to playing Campbell, Charleston Southern, Radford, Liberty, Coastal Carolina and UNC Asheville. We had nothing in common with these schools and our fan base never heard of them.

“Then we went to the NAC but all our momentum was gone and local players weren’t all that interested anymore.”

Another destructive long-term decision was made at the end of the 1996-97 season, when longtime coach Terry Truax—who had overseen the Tigers’ ascent in the ECC—was fired by second-year athletic director Wayne Edwards following a 9-19 campaign. It was just the second losing season in nine years for Towson—and the start of a stretch of 16 consecutive losing seasons, the fourth-longest active streak in Division I.

Towson moved to the CAA along with Delaware, Drexel and Hofstra for the 2000-01 season, but the Tigers never redoubled their investment in the program and have languished at the bottom of the CAA for 11 seasons.

“The program was neglected for a long time,” O’Connell said. “We fell behind a lot of schools during the years we were stagnant. We were not willing to spend the money to enhance the program.”

The most glaring symbol of intuitional neglect happened a year ago last week, when Towson’s game at George Mason was postponed after the Tigers got stuck in a blizzard and needed 10 hours to make the 70-mile trip to Fairfax. That Towson chose to leave at 3 p.m for a 7 p.m. game when snow was predicted didn’t please CAA commissioner Tom Yeager, who issued a statement reprimanding Towson.

Such an experience surely frustrated Waddell, who was just beginning his fourth month as the athletic director. A Type-A personality who is equal parts marketer, motivational speaker and media relations guru, Waddell exercised caution in allowing last season to play out without firing lame duck head coach Pat Kennedy yet began establishing how he expected excellence from Towson employees.

In Pat Skerry, Waddell found a head coach who shares his around-the-clock approach and as well as his program-building philosophies, even when a spate of defections left Towson with a decimated roster that had little to no hope of competing in the CAA in his first season. The three best underclassmen from last year’s record-setting team all left school while RaShawn Polk sat out this year following an off-season arrest, which left the Tigers with a single returning player—Erique Gumbs—who averaged a grand total of 3.6 points per game last year.

“I would say that, along with what Baylor and Indiana and Cincinnati had to do to rebuild their basketball programs, we’re right there with them—this has been a long time, it’s been systematic and it’s been comprehensive,” Waddell said. “So Pat has a tough job. But Pat also has the ability to come in and do things the right way.”

For Skerry—who said he has no hobbies and has always believed “coaching beats working for a living…I love it”—part of that involved absorbing the punishment of a grueling non-conference schedule, including season-opening games at Kansas and Michigan, as well as an unforgiving CAA slate which includes two games apiece against the league’s top five teams, all while refusing to allow the Tigers to make excuses and instilling in them the expectations he’ll have moving forward.

“I believe in shooting straight with my guys,” Skerry said. “I also felt that guys are going to be here for two, three or four years. We’ve got to help change habits and develop different habits. Once you do that, you have a culture, you have a program. To just kind of get through the year even though we have some shortcomings and play make believe and all of that, that would put us one year behind.”

Recruiting-wise, Skerry is approaching Towson like Jay Wright approached Hofstra a generation ago, when he revived what he called “a sleeping giant” by tapping into a basketball-rich market and finding that one player—Speedy Claxton—who could turn around the entire program.

Towson’s version of Claxton could be in next year’s recruiting class, which, a la Hofstra, features a pair of big-time transfers (Georgetown’s Jerrelle Benimon and South Florida’s Mike Burwell) as well as a handful of promising high schoolers. “I won’t tell you which one, but I think one of our recruits could be that type of an iconic player—and so do a lot of other coaches around this league who were rather speechless when they heard who we had signed,” Waddell said.

While Waddell is unfailingly upbeat, optimistic and entertaining in discussing Towson’s future—he said Monday the best part about ending the losing streak is that “we don’t have to go to Coke Zero or Spaghetti O’s” as Towson looks to sell naming rights to its new arena, which is scheduled to open for the 2013-14 season—he is also an uncompromising realist who won’t allow any of the Towson staff to rest on recent accomplishments.

At the athletic department’s weekly meeting Monday, he didn’t even bring up the win over UNC Wilmington. And the players and coaches who helped the Towson football team reach the Division I-AA playoffs for the first time ever this year—a mere one season after the Tigers went 1-10—have been ordered not to wear any clothing commemorating the 2011 season inside the football facilities.

“We’re building a family here and we’re trying to raise a teenager,” Waddell said. “We’re at zygote right now. We’re not mature. We’re not even into the gestation phase. We’re just trying to grow and do it the smart way.”

He is also reconnecting with Towson’s successful past—Truax, who is in regular contact with Skerry, and the 1990-91 Tigers squad were all recently inducted into the school’s Hall of Fame—and keeping one eye on a better future by embracing the largely negative attention that comes Towson’s way now (though Towson was the lead story on the 6 p.m. SportsCenter Saturday).

Waddell, a former broadcaster in the ACC with North Carolina and Virginia, is accessible, active and patient with all forms of media. When Davis—who was in college a few hours to the south at Duke when Towson reached the NCAA Tournament—bashed Towson, Waddell invited him, via Twitter, to a game.

Waddell also realizes engaging with the press is the best way to keep Towson on people’s minds and shape the story as the Tigers rebuild. And make no mistake: Waddell expects a return to the days in which everyone else wants to be Towson and the Tigers were anything but a sympathetic figure.

“It’s like coach tells you: We got beat by 30 points or 40 points, you got exactly what you deserved,” Waddell said. “You don’t want to be the butt of people’s jokes? Then don’t play like that.

“But you know what? In a few years, when we’re beating people like that. I don’t want to hear anybody complain we’re rubbing it in. That’s how it goes. There is no mercy in fighting or sports. I asked no quarter and I’ll give none. That’s just how it goes. I don’t have a problem with that.”