In which I release the hounds on C. Montgomery Larranaga 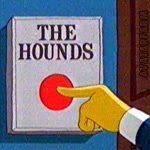 And the hounds with the bees in their mouths!

For months now I’ve felt a little bit like Carlos Beltran, regretting what might have been if I hadn’t let that strike three sail past me with the pennant on the line. I mean, how could I resist the opportunity to properly celebrate Jim Larranaga’s glorious exit from George Mason?

As you no doubt know, he bolted Mason and headed south to Miami, like any good New York native bound for retirement, on April 22. Well, except by the time he got to Miami, he was no longer Jimmy from the Bronx but Jaime whose heritage is Cuban and whose family is all based in Florida. Seriously. Whatever.

Anyway, I dubbed that day GREAT FRIDAY and spent the next six to eight months streaking naked around my neighborhood screaming “DING DONG THE WITCH IS GONE!” which left me barely enough time to do my soul-crushing day job work, never mind put my ebullient thoughts into words.

Since then I’ve missed multiple chances to tie Larranaga’s exit into a newsworthy event. I laughed when karma punched him in the groin and the Miami men’s basketball team was dragged into the scandal involving rouge Hurricanes booster Nevin Shapiro. Then I cursed when, voila, another Larranaga-coached player who commits misdeeds (albeit before Larranaga got there—everything is his fault!) is magically allowed to play after a minimal punishment.

And I REALLY laughed when Andre Cornelius, whose foolishness on Twitter fueled VCU’s NCAA Tournament-clinching win over Mason in last year’s CAA semifinals, continued to serve as the poster boy for recidivism amongst Larranaga recruits when he got arrested for credit card fraud and was suspended the entire first semester by Paul Hewitt. (Under Larranaga, Cornelius would have been credited for time served and never missed a second of game action)

I didn’t get catty in print (or pixels) when Larranaga rejoined Twitter and name-dropped every C-level celebrity he saw in and around Miami, or when he signed a 272-year extension (or so) after a mere 18 games. I even missed a couple chances to write about Larranaga prior to a Hofstra-Mason game, but chose to spotlight my buddies in Mason Nation instead.

I kept putting off the Larranaga piece, because writing how you feel after the neighborhood bully up and moves to Florida on zero notice is a delicate exercise. As The Heights might have said, if only they were a real group that had a chance to record a sequel to its no. 1 single and not a fake group on TV whose show was cancelled before they hit the top of the charts: How do you write about the devil?

I figured my window was closed. I’d have to keep my thoughts in my head and live with the regret of never giving Jim Larranaga the sendoff he deserved.

But thank the heavens for Jaime Larranaga, because all he does is keep lifting that window open and giving me ample opportunity to finally rant and rave and tell you all what I’ve been keeping inside for 305 days, but who’s counting, and to yell, over and over again: I TOLD YOU SO.

It happened again yesterday, when that giant gust of hot air you felt around lunchtime was Larranaga spewing lies, damned lies and faulty statistics about how his Miami squad is more deserving of an at-large spot in the NCAA Tournament than a mid-major. You can get the entire exchange between Larranaga and Daily Press (Virginia) columnist David Teel—or, as he is now known in my house, THE GREATEST WRITER ON EARTH—here.

The beauty of this is Teel clearly wasn’t trying to goad Larranaga into blowing up Twitter. He was just asking how a coach in Larranaga’s position keeps his players from getting too distracted by bubble talk. Innocent enough.

But it was Larranaga who furthered the discussion by bad-mouthing this year’s crop of elite mid-majors, which left Teel no choice but to ask follow-up questions that allowed Larranaga to continue saying stupid, inaccurate stuff—ABOUT GEORGE MASON, NO LESS—and to keep digging himself so deep a hole, he has to look up to see China.

Teel disproved, point by puke-inducing point, all of Larranaga’s lies about Mason’s sub-300 non-conference RPI, the dearth of quality mid-majors, the history of at-large bids awarded to teams with an RPI below 50, as well as his patently false assertion that mid-majors with RPIs in the 100-150 range are being discussed as at-large possibilities, all with the type of detached reason I wish I could muster (actually I don’t—this makes me feel ALIVE, man). I only wish he’d asked who was in charge of putting together Masons pissposh non-conference schedule. Gosh, I don’t know, maybe the guy who was there last year?

There was a way for Larranaga to make a case for Miami without badmouthing anyone, ESPECIALLY the school that made him rich and famous beyond his wildest dreams and allowed him to have the type of success that “earned” him the Miami job. There was even a way to declare that the mid-major crop this year isn’t as strong as last year and that a borderline BCS team such as his deserves more consideration.

But the napalming of bridges yesterday reminded me of the style in which Larranaga left Mason—or, more accurately, the style in which he introduced himself at Miami. In opening his initial press conference, Larranaga gushed over Mason president Alan Merten and the players he left behind but didn’t refer to Mason athletic director Tom O’Connor once. Normally, as someone who only refers to O’Connor with a bunch of four-letter words, I wouldn’t mind this oversight.

But even if Larranaga hated O’Connor—and how foolish is that, hating the one person responsible for getting Mason into the 2006 NCAA Tournament by “not being in the room” when Mason was discussed—the right thing and the classy thing to do would be to thank O’Connor as well. Tom Pecora didn’t leave Hofstra as besties with Jack Hayes and Stuart Rabinowitz—especially Rabinowitz—but he referenced and spoke well of both men in his opening remarks at Fordham in March 2010. That’s what you do.

Despite the strained relations at the end of his Hofstra tenure, Pecora left in a classy style consistent with the words he spoke and the morals he espoused throughout his nine-year tenure. A man who suffered unimaginable grief before he reached the big time preached family and comfort first, and spoke often and eloquently of how much he enjoyed coaching in his backyard, and promised he would not leave the tri-state area. And he didn’t.

Larranaga? Yesterday was just another example of how everything he ever said at Mason was a steaming pile of crap, as was his reputation as a golly-gee good guy and a principled man who valued integrity over victory.

The man used to be a veritable Mount St. Helens, spewing verbal ash about what a great place George Mason is, how great it is to live in the Fairfax area and how life was far better in the CAA than it could be anywhere else. Like he did here, here and here.

In an interview with The New York Times last March 27, Larranaga said it “…is really no longer true” that “…there [is] a big difference between the best teams in the high-major leagues and the best teams in the midmajor leagues.” The next day, in an interview with the Associated Press, he unfurled the statistics supporting his belief the CAA was better than the ACC and the Big East in the only place it mattered—the NCAA Tournament.

The morning of the national championship game Apr. 4, after a week of glomming his way into all the coverage of VCU and Butler, Larranaga spoke to Kyle Whelliston of The Mid-Majority and, in praising Brad Stevens as the next John Wooden, also preached “…the five non-negotiable building blocks of success,” which he identified as “humility, passion, unity, servanthood, thankfulness.”

Speaking of Stevens, Larranaga said “…he’s never going to leave for the sake of leaving. He’s only going to leave if it’s the absolute right situation. He’s guided not by a hunger for money, but by strong bedrock principles that he lives his life by.”

A mere 18 days later, everyone else learned about Larranaga’s principles when he stood at Miami and gushed about how he looked forward to the chance to “compete at the highest level of basketball” in the ACC, “…the best basketball league in the country.”

Everything he said earlier was, of course, a pile of crap, and he left this great gig in a great conference because his ego couldn’t handle no longer being the big boy on the block or the decline in stature now that someone else in the CAA had gone to the Final Four. You’d think a man who preached such tenants would rather be comfortable with his legacy than die with the most toys, and that he would feel a certain affinity for Shaka Smart while recognizing the going rate for striking while the iron is hot has shot up faster than the price of gasoline since 2006.

Nothing he says is believable, or said with any purpose other than promoting Jaime Larranaga. He is the worst kind of politician—the Newt Gingrich of college basketball, someone who thinks no one will notice if he ignores his own history and wants the rules of campaigning changed for him at his convenience. And everyone knows it now—even his one-time devotees in Mason Nation, only the most pathetic of whom remain by his side now. I told you so. Damn, that felt good. Worth the wait.