A Christmas Story: Jenkins’ Hofstra family ready to share in his NBA debut 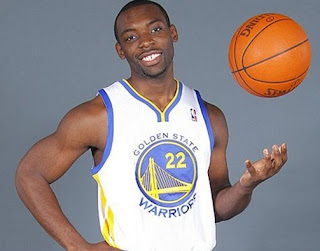 For a few weeks this fall, Charles Jenkins Sr. and his wife Patricia were like any other parents of a recent college graduate who welcome their child back into the fold as he searches for his first “real world” job in a tough economy.

Speaking with a hearty laugh and tongue planted firmly in cheek, Charles Sr. said last week that “….my wife enjoyed having him around—I did too, I wouldn’t tell him that. We were anxious to see him get a job and leave. It’s the same. No different.”

Their son finally got that job and moved out—3,000 miles to the west, where tonight Charles Jenkins will punch a clock as a professional basketball player for the first time in front of a national television audience when the Golden State Warriors host the Los Angeles Clippers at 10:30 on ESPN.

Jenkins’ NBA debut on Christmas night is the culmination of a dream come true not only for the Jenkins family but also for the extended Hofstra family, all of whom will watch its favorite son with an uncommon sense of—wait for it—pride as well as an uncanny sense of connection shared by those who watched him for four transcendent years as well as the Flying Dutchmen basketball alumni who helped him prepare for and find his NBA opportunity.

“It doesn’t get any bigger than Christmas Day,” said Speedy Claxton, the former Hofstra superstar and current Warriors scout who was in the Warriors’ draft room and implored his team to draft Jenkins with the 44th overall pick of the draft in June. “I played 10 years, I played on Christmas Day once.”

“Watching Charles will be my Christmas present,” said Jason Hernandez, the former star Hofstra point guard and Claxton teammate who trained Jenkins throughout the summer and fall.

“The Hofstra connections—it means a lot,” Jenkins said from Warriors camp last week. “I’m a part of Hofstra for the rest of my life. That goes from the new guys that come in to the alumni that are here for me. The Hofstra family is a big one—once you get into it and you meet everybody, you build a friendship that lasts forever. That’s the friendship that I built with Jason Hernandez and Speedy Claxton.”

While the Warriors drafting Jenkins was the bit of unforeseen serendipity needed to give his NBA journey a storybook ending, the pairing of Jenkins and Hernandez was a natural and predictable fit. Hernandez opened the training facility Pro Hoops after the end of his professional career in Puerto Rico and often worked out with Jenkins during the latter’s stellar career at Hofstra. Shortly after his senior season ended, Jenkins teamed up with Hernandez and his staff, which put Jenkins and other NBA Draft prospects through rigorous two-a-day workouts.

Prior to the Draft, Jenkins’ schedule on Monday, Tuesday, Thursday and Friday consisted of basketball workouts at Pro Hoops from 9 to 10:30 a.m., followed by strength and conditioning from noon to 1:30 p.m. and skill specific workout (such as shooting or ball handling) from 3 to 4 p.m. On Wednesdays and Saturdays, Jenkins’ basketball workout went from noon to 2 p.m., immediately followed by an hour of core flexibility exercises.

Hernandez also introduced Jenkins to his sports nutritionist, Wendy Meyer-Sterling, who put him on a diet that allowed the already sculpted Jenkins to shed 16 pounds and record the third-best body fat percentage at the NBA Combine.

“I knew I had the opportunity to play in the NBA and I just wanted to stay focused,” Jenkins said. “I know so many people in the world that would love to be in the position that I am. I didn’t take anything for granted. I just want to go and be the best player I can every day when I wake up.”

On the weekends, Jenkins went bowling or to the batting cages with friends and was home by 2 a.m. During the week, he was in bed well before the late news and out the door to work out at Pro Hoops before his Dad, a noted early riser even in retirement, was awake.

“I admire his work ethic,” Jenkins Sr. said. “He works extremely hard and I admire that. Even now I admire the fact that he gets up and goes to work hard and works hard everyday. I’m very proud of that. I think it’s a good representation of the family as well that he works hard to accomplish his goals.”

“I was always impressed with Charles’ work ethic and willingness to listen and then implement what he learned,” Hernandez said. “I was not surprised though. His parents are great people who work hard and they obviously instilled this into him. At Pro Hoops we always talk about training as a lifestyle and Charles believes that as well.

“We would be in the gym regardless of a season because this is what we do and who we are.”

The fate of the 2011-12 NBA season was uncertain long before the Draft. Of course, uncertainty is nothing new for Jenkins, who was lightly recruited out of high school and endured two coaching changes and the transfer of two starters prior to his senior year at Hofstra.

Still, an uncertain draft day was unexpected for Jenkins, who was expected to go in the second half of the first round but remained the top available prospect for the first hour of the second round. Yet even as other players flew off the board in the second round, Claxton never considered the possibility he and the Warriors might end Jenkins’ long wait.

Claxton officially scouted Jenkins just once, at Manhattan last December, but saw most of his home games from his courtside seat at Hofstra Arena. And when the 44th pick arrived, and Jenkins was still available, Claxton wasted no time making his pitch for his fellow Hofstra alum.

“You always look at who is the best available and his name was first for a long time,” Claxton said. “I told [fellow executives]—I forget who else was the other option—but I told them this is somebody that is a great kid, that can really play and he’s a position that we need. He fits. That’s kind of a no-brainer. Everybody jumped on board and we just went with it.”

While the small but boisterous crowd at Bar Social celebrated Jenkins’ selection, a pair of former teammates began texting one another and marveling over the wild turn of events that linked a trio of Hofstra basketball legends and how the one team employing a Hofstra grad was able to give Jenkins a well-earned opportunity to play in the NBA.

“It was very, very, very exciting,” Claxton said. “Not only did I help him, but I helped the program to still keep their name out there and to show people that we’re producing pros.”

“I think the Hofstra connection is very cool,” Hernandez said. “[Claxton] scouts for a living and played in the NBA so he isn’t going to just vouch for anyone because his credibility and job are on the line.

“We texted each other the night of the draft and the sum of the conversation was that this is what it’s all about. Speedy and I were able to get to a NCAA Tournament together and now as professionals we were able to connect again and not only see an individual succeed, but Hofstra succeed once again.”

Jenkins’ success continues to unite Hofstra as well. His magnificent senior season turned him into an Internet superstar, earned him the honor of having his number retired by Hofstra while he was still wearing it and made a Flying Dutchmen basketball ticket an unusually hot item.

The two men who coached Jenkins at Hofstra appreciate how his success yields dividends at two different schools and marvel at how Jenkins, Hernandez and Claxton ended up intertwined.

“When you look at the bloodlines with Charles and then all the way down through Speedy and Jason and Norman Richardson—[and] Carlos [Rivera] and Loren [Stokes] and Antoine [Agudio] in the middle of that—we’ve always had great help from our alumni in recruiting and always been able to use our former players as points of reference for the guys we are recruiting,” Tom Pecora said this summer. “It’s good to see this continue at that level.”

“I think it’s incredible, it speaks volumes about the Hofstra basketball family—Jason Hernandez, Speedy Claxton and Charles Jenkins all tied together in this thing,” Mo Cassara said. “Part of what makes Charles so great is the Hofstra connection. These former players have been around him and influenced him so positively over the last couple years. And Charles embraces that too, which is really great.”

Hofstra, meanwhile, remains Jenkins’ foundation. He remains in constant contact with his ex-teammates and either watches Flying Dutchmen games online or gets reports from his Dad, who has season tickets. On his Facebook last week, Jenkins wrote “solid weekend for sports…both Hofstra men & women’s basketball won…and so did the Warriors!!!”

While Patricia Jenkins celebrated Christmas with her son today and attends her first NBA game tonight, the rest of Jenkins’ Hofstra family—spread out from his living room in Queens to thousands of other households nationwide—will be checking their watches during dinner and willing 10:30 to arrive.

“Such a short time ago he was running around with a Hofstra jersey on, helping us out last year,” Cassara said with a laugh. “I’m obviously going to be thrilled. It’s a great moment not only for Charles but for Hofstra basketball.”

“Watching Charles is like watching me—I’m reliving my career watching him,” Claxton said. “I wish him the best of luck. I hope he doesn’t get hit with the injury bug like I did once I got there and he can have a stellar career.”

And if you’re looking to get out of the house and can get to the Jenkins home in Queens, well, Jenkins’ Dad and at least one of his ex-teammates would welcome extended members of the family.

“Every Christmas I’m usually at his house,” said Nathaniel Lester, Jenkins’ co-best friend the last five years along with Greg Washington. “So I’ll just continue with that routine.”

“My son-in-law is going to spend the day with me [at] the house,” Charles Jenkins Sr. said. “Come by if you want.”