If you’re like me, you haven’t eaten since Christmas night as you wait for Charles Jenkins to score the first points of his NBA career. To keep your mind off those terrible hunger pains, I present to you 22 short facts about the new beloved favorite team of Defiantly Dutch—the Golden State Warriors. How many times can I manage to rant about Hofstra in these facts? Many, many times!

1.) The Warriors are an original NBA franchise, founded as the Philadelphia Warriors in 1946 as part of the fledgling Basketball Association of America (which became the NBA in 1949). The Warriors won the first BAA/NBA title by beating the Chicago Stags in the championship series. It’s just like Mark Jackson winning his first game over the Chicago Bulls Monday night!

2.) The Warriors moved to San Francisco after the 1961-62 season, began playing home games in Oakland in 1966 and were renamed the Golden State Warriors at the start of the 1971-72 season. It’s just like Hofstra moving from Calkins Hall to the PFC to the Arena and dropping the Flying Dutchmen nickname!

3.) The Warriors have won three NBA titles, taking home the grand prize in 1955-56 as well as 1974-75, when they earned their only championship on the west coast with a four-game sweep of the Washington Bullets in the NBA Finals.

4.) In their last non-road regular season game as the Philadelphia Warriors on March 2, 1962, Wilt Chamberlain scored an NBA-record 100 points in a 169-147 win over the New York Knicks in front of fewer than 5,000 fans at Hershey, PA. In the nearly 50 years since, only one NBA player (Kobe Bryant with 81 points) has come within 20 points of matching Chamberlain’s feat. Yeah but did he ever beat William & Mary with a game-tying 3-pointer to force overtime and a game-winning, buzzer-beating 3-pointer in overtime?!

5.) Chamberlain, not surprisingly, is the leading scorer in Warriors history with 17,783 points. (Urge to make sophomoric joke about scoring rising…)

6.) The Warriors have retired the numbers of five players so far: Chamberlain, Alvin Attles, Rick Barry, Tom Meschery and Nate Thurmond. Chris Mullin (the Warriors’ all-time leader in games played) will become the sixth Warriors player to see his number raised to the rafters on March 12, when the New York native and St. John’s legend sees his no. 17 retired. Yeah but did any of the Warriors’ stars have their numbers retired while they were still active?!

7.) Thurmond is the Warriors’ all-time leading rebounder with 12,771 boards. He was also the first player in NBA history to record a QUADRUPLE double on Oct. 18, 1974, when he recorded 22 points, 14 rebounds, 13 assists and 12 blocked shots in his debut for the Chicago Bulls. OK. Even Jenkins hasn’t done that.

8.) One player who will probably not have his number retired by the Warriors is Latrell Sprewell, who was suspended for the final 68 games of the 1997-98 season for twice choking coach P.J. Carlesimo during practice.

9.) Carlesimo is one of 24 men to coach the Warriors. His .289 winning percentage (46-113) is sixth-lowest in franchise history, but he coached more games than anyone below him.

10.) The winningest coach in Warriors history is Attles, who won 557 games over two stints on the bench as well as the 1975 NBA title. Fellow Hall of Famer Don Nelson ranks second with 422 wins, also spread out over two stints.

13.) The Warriors have made the playoffs 28 times, but 22 of those trips came in their first 29 years of existence, during which the Warriors reached the NBA Finals six times and got as far as the conference finals another five times.

14.) The Warriors have made the playoffs just six times in the last 34 years. Five of those trips came in an eight-year span from 1986-87 through 1993-94. Still, basketball fans of a certain age—say, 38—have fond memories of the last time the Warriors were reasonably competitive. Such as…

15.) …when Speedy Floyd set NBA records by scoring 29 points in the fourth quarter and 39 points in the second half of the Warriors’ lone victory over the Lakers in the 1987 semis. And then there was the high-scoring “Run TMC”-era Warriors of 1989-90 and 1990-91, who, led by the trio of Tim Hardaway, Mitch Richmond and Chris Mullin, went just 81-83 with one playoff berth but led the league in scoring in ’89-90 and finished second in ’90-91. The Warriors appeared primed to remain in contention when they acquired top overall draft pick Chris Webber in 1993 and won 50 games as he won the Rookie of the Year award in 1993-94, but Webber had a falling out with Nelson, refused to suit up again for the Warriors was traded to the Bullets in November 1994. It’s a lot like the Bryant Crowder saga, except not.

16.) The Warriors missed the playoffs 12 straight seasons from 1994-95 through 2005-06, which made them the only team in the NBA (other than the Charlotte Bobcats, who began play in 2004) not to appear in the postseason in that span. Yeah well Hofstra went 23 years in between NCAA Tournament berths, so there!

17.) The Warriors made that one playoff berth in the last 17 seasons count, though, by squeaking into the playoffs as the eighth seed in 2006-07 and producing the biggest upset in the history of the 16-team playoff format when they knocked off the top-seeded Dallas Mavericks in six games in the first round. The Mavericks won 67 games during the regular season, 25 more than the Warriors. I will write a whole lot about this when the eighth-seeded Flying Dutchmen take on top-seeded VCU in the CAA quarterfinals.

18.) Alas, the next year, the Warriors won 48 games and missed the playoffs entirely—the only NBA team to win 48 games and sit home for the postseason. Basically, it was the equivalent of having a top 30 RPI and not receiving an at-large bid to the NCAA Tournament. No truth to the rumor Tom O’Connor ran the NBA Playoffs that year.

19.) Eighteen former Warriors are enshrined in the Pro Basketball Hall of Fame. Jenkins will make it 19!

20.) One of those Hall of Famers, Rick Barry was the NBA’s all-time leader in field goal percentage—a cool 90 percent—at the time of his retirement. He has since been surpassed by Steve Nash and Mark Price, each of whom are at 90.4 percent, but Nash and Price have a combined 5,466 free throw attempts. Barry had 4,243 all by himself.

21.) Rick Barry was so cool, he shot free throws like this. Take note, Mike Morrison! 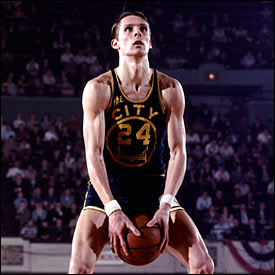 22.) New Warriors coach Mark Jackson played more games in the NBA—1,296—than any head coach in history. He ranks third all-time in assists with 10,334—a mere 10,333 ahead of Charles Jenkins, who also has 12,489 fewer points than his head coach. Remedy that tonight, Mark, and let me eat again!