What was supposed to be the most festive night for Hofstra basketball in the last 10 years was turning into the most disheartening evening since Selection Sunday 2006. A crowd of several dozen, including most of Mo Cassara’s staff and returning players, gathered at Bogart’s, err, Bar Social for the NBA Draft and to celebrate the first round selection of Charles Jenkins.
Except…it didn’t happen. Those in attendance crept closer to the television and the silence leading up to David Stern’s announcement grew more anticipatory with every post-lottery pick, and the groans grew louder and more desperate every time a team took someone else. By the 27th pick, Jenkins was the best player remaining on the board, according to Jay Bilas (grrr), but he went unselected by the Nets, Chicago Bulls, the San Antonio Spurs and the Bulls again—even though he worked out for the latter two teams and both were enamored with him—as the first round ended. 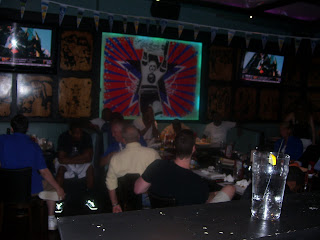 The crowd began thinning out in a hurry once the first round ended. The impromptu draft pool—in which attendees picked Jenkins to go anywhere from 15th to 42nd—was abandoned. The picks began arriving at a faster pace, announced by Stern lackey Adam Silver, at least if a team submitted its pick while ESPN wasn’t in a commercial.
Jenkins remained the best player on the board for the first 13 picks of the second round. And once the Indiana Pacers—whom some mocks had selecting Jenkins as early as 15th overall—and Bulls passed on him again at 42 and 43, even Cassara seemed to begin losing optimism as he arched his eyes and glanced downward at his cell phone.
Another staff member got up disgustedly and declared he was leaving. “This is [expletive] unbelievable,” he said.
Charles Jenkins, the best player not to be drafted in 2011. The Flying Dutchmen, the best team to not go to the NCAA Tournament in 2006. It all made awful, perverse, we-are-doomed-just-like-the-ship-we-are-named-after sense. 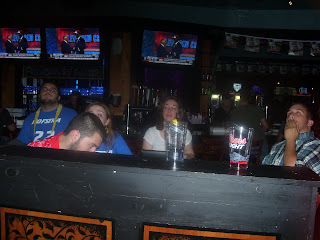 Until Speedy saved us.
Finally, at 11:07 p.m.—64 minutes and 17 picks after Jenkins became the top player on the board—what remained of the crowd at Bar Social broke into loud applause as soon as the Stern lackey said “Charles…” signifying Jenkins had landed with the Golden State Warriors.
You know, the same Golden State Warriors for whom Speedy Claxton serves as a scout. You know, Speedy Claxton, the last Hofstra player to be drafted 11 years ago. The same Speedy Claxton who took in several games this season from a courtside seat and spoke at the year-end barbeque Apr. 30.
22 goes 44th to a team that employs Speedy Claxton. The night went from sour to serendipitous, just like that. As Jenkins highlights and footage of Hofstra fans celebrating in Newark aired on the flat-screen televisions, a small but spirited chant of “Charles Jenkins!” began. The staffer who got up to leave after the Bulls’ pick smiled broadly from the front of the bar, glad he stuck around for one more selection. 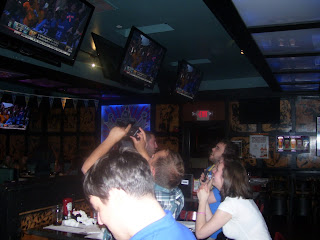 Rants about the Curse of Jay Bilas—oh sure, look what happens when he actually pretends to respect the CAA—as well as the paralysis by analysis that passes for draft day behavior by general managers in every sport and the possibility that Tom O’Connor was pulling the strings on this draft would have to wait. Thankfully. (Though our good friend Mike Litos properly hammered the dopes who passed on Jenkins and other CAA stars)
“I was a little concerned—I knew how much [the Bulls] loved Charles and when they didn’t pick him in the second round, it’s a little bit of a crapshoot,” Cassara said. “But I think it worked out really well. [The Warriors] need a point guard and you have a guy there, Speedy Claxton, in their war room who really knows Charles well and was able to speak to his abilities. I think he’s going to a great opportunity.”
Cassara said while the draft is always unpredictable, players such as Jenkins were particularly vulnerable this year because of the anticipated lockout in the NBA. Thirteen of the 60 selections were from outside the United States, including five of the last seven, and many of those players won’t be signed to contracts as teams spend next year scouting them and saving money.
“I’ve been through this with a handful of different players at different schools and I know how precarious it is,” Cassara said. “It’s not an American draft, it’s a global draft and [there are] players from all over the world that may not be on an NBA roster that get drafted and there are some guys who are not predicted to get picked that get picked. Different guys are left on the board and you never know what’s going to happen.”
That uncertainty has created a far different draft than even 11 years ago, and made it as big an accomplishment for Jenkins to get drafted at all as it was for Claxton to go 20th overall to the Philadelphia 76ers.
“I really believe if you were to take some of the players in the CAA this year—from [Denzel] Bowles to Jamie Skeen to Cam Long to Charles Jenkins to a Chase Allen—I think the way the draft operated 10 years ago, I think four or five of those guys get drafted,” Cassara said. “That’s just the nature of the beast, so to speak. I think it’s an even greater accomplishment for Charles. The draft today is a very different draft than when Speedy was drafted. Very different game, it’s become a much different focus. So I think it’s a real credit to Charles Jenkins and what he’s been able to do.”
Cassara’s phone began ringing as soon as Jenkins was drafted—one of the first calls he received was from Warriors assistant coach Mike Malone, a good friend of Cassara’s who is also a former coach at Worcester Academy in Massachusetts—and he fielded every call with equal parts relief and, pardon the pun, pride.
“I was thrilled for Charles—I’m thrilled for his family and I’m thrilled for our program, I’m thrilled for Hofstra,” Cassara said. “I think it’s a great day for everybody involved. It’s really the pinnacle of a lot of hard work over the last five years by everybody involved and he deserves a lot of credit. To be picked among the top 50 players in the NBA Draft is really an unbelievable thrill and I’m really, really happy for Charles.”
Email Jerry at defiantlydutch@yahoo.com or follow Defiantly Dutch at http://twitter.com/defiantlydutch.
Posted by Jerry Beach at 4:33 AM

This is such a great story. I hope it continues with Jenkins realizing the dream that was ripped away from Speedy due to injury.

Definitely a weird night but it worked out in the end... nice write up!