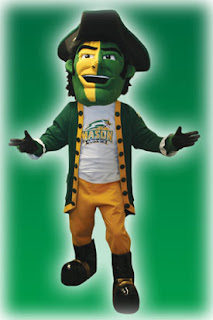 C'mon Mason Nation, let's hug it out. Our mascots suck too.
The great thing about being a sportswriter—even a lousy, unemployed one—in the 21st century is that you can know, in real-time, how much people think you suck. It sure beats the old days, when a dissatisfied sports fan had to type or—gasp—write a letter to the Local Sports Columnist.
I remember quite well the night North Carolina won the national championship in 1993. I was a huge Tar Heels fan growing up in Connecticut and I had cut out a column by late Hartford Courant writer Alan Greenberg in which he guaranteed UNC would not cut down the nets. So a few hours after Chris Webber called a timeout he didn’t have (which, given his shady past, is the single most suspicious thing I’ve ever seen in a sports game, but I digress), I sat down to write Greenberg the most withering letter ever.
Except it never sounded right. Attempt after attempt after attempt ended up shredded in the garbage can. It also occurred to me that even if I did write him a letter, the odds of it getting into his hands were fairly long, and the odds of it getting into the paper even longer. So I grew discouraged and finally just gave up and blasted cheesy-ass victory music while deciding how many hundreds of dollars to spend on championship swag.
Fortunately, 17 years later, passionate fans no longer have such hurdles to clear in order to correspond with writers. The newspaper as we knew it is dead. If you are writing a local writer or columnist, you are almost certainly reading him online and very likely responding to something called a blog post, not a story that landed in what remains of the newspaper.
The pen and paper has been replaced by the laptop computer. The letter to the columnist has been replaced by the email to the columnist, which saddens the Postal Service and nobody else. And the email to the columnist is by far the least popular option for a fan wishing to express his thoughts. He can discuss it on a message board, or communicate directly with the writer via 140-character missives on Twitter.
All of which is a roundabout way of saying thank you, Mason Nation, for making yesterday the biggest day of traffic I’ve ever had here. Who knew you guys were so eager to read what Tom Pecora had to say about his team following the 90-72 loss to Team Pour It On, or to learn how and why Hofstra killed football?
(There’s also plenty to be said about how a Hofstra rival is responsible for my biggest traffic day ever, none of which reflects well upon the size and scope of Dutch Nation, snort)
I heard from those who wondered what the fuss Tuesday night was all about…those who disagreed with the post but understood my disdain for Mason…those whose entire argument consisted of either “Ha ha, we made the Final Four and you didn’t!” or nuts jokes that ceased to be timely in March 2006…those who thought my blog was worthless and not worth reading and told people via Twitter to read it, mmmm, that’s good irony…and those who thought I was the product of crappy parenting and worse journalistic training, and agreed with Corporate America that I was unworthy of employment.
I heard from Mason grads and fans who wrote with equal parts passion and eloquence, and those who made me wonder if Freshman Comp is an elective at Mason. (“Employed” has only two es, not three, and Hofstra has a “t” in it) In their defense, some of the dumbest people I ever met shared a communications class with me at Hofstra. My wife says the same thing, and always nudges the person next to her, points at me and laughs when doing so.
So thank you, Mason Nation, for assuring I go at least one day without wondering if Bruce Springsteen wrote “Radio Nowhere” about bloggers. The only thing worse than being scorned is toiling in complete anonymity.
I welcome you, the fans of the green and gold, to this blue and gold corner of the Interwebs, where we sometimes discuss the CAA in general and even occasionally go a day without making a snarky comment directed at your coach or athletic director! Make yourself at home. We’ve got plenty of extra pillows for your comfort, and protective cups for all.
We’re not big fans of someone who has been here all night drinking the last of the soda on his way out the door, though. I know, I know: Your neighbors Bill and Mary don’t complain when you drink the last of the soda, and if you don’t want someone drinking all the soda, BUY MORE SODA!!!
Next year, when Team Makes Me Kick Stray Cat visits Long Island, I invite you to visit the local sights with me and partake of the local culture. I’ll take you to the pizzeria where my wife and I had our first date…the Costco where I once saw Long Island native and Twisted Sister lead singer Dee Snider…the restaurant Billy Joel was singing about in “Scenes From an Italian Restaurant”…and of course the dock where Joey Buttafuoco parked “Double Trouble,” the boat in which he and Amy Fisher had many trysts. Hey I didn’t say it was GOOD culture.
We share a passion, albeit one directed at different schools, but I believe despite our inherent differences, we can all co-exist, find a middle ground and get along perfectly fine.

In quasi-seriousness, the reaction to my post about how Mason is a big ol’ buncha meanies provided a good glimpse at the interesting modern day phenomenon of writers being subjected to the same instant criticism and analysis as the people and players they cover.

Just like ballplayers, managers, coaches and executives (ESPECIALLY executives), don’t believe for a single friggin’ split second any sportswriter who says he doesn’t read what is being said about him. He, like the people he covers, is full of crap. EVERYONE wants to know what everyone else is saying and writing about him. Everyone.

It reminds me of the big league pitcher who swore he never picked up a paper or turned on a 24-hour news network. “I didn’t even know we were at war with Iraq until someone at my apartment building told me,” he said. So of course a few weeks later I walk into the Mets locker room and there he is, reading the Daily News.

It would be hypocritical to be upset by the immediate forum that readers possess and foolish to pretend it doesn’t exist. If you expect thick skin in the people whom you cover and write about, the least you can do is possess it yourself.

This, too, was a perfect example of what your good friend and mine Mike Litos means when he writes about how differently we absorb and exchange information these days. The gatekeepers are gone. There are no walls between writer and audience. The old ways—in which we write and you read and rarely do the two sides ever interact—are dead and buried.

Interactivity is a must if we hope to survive, or at least deny reality a little longer. Even and especially, it turns out, when the “out there” Springsteen is singing about is Mason Nation.

Interesting post. I've encountered something similar: when Lehigh wins, I get decent traffic, but when Lehigh loses - it's even higher. I think my best day traffic-wise may have been a day when Lehigh lost to Lafayette!