College of Bill Lawrence 48, Hofstra 47 (Or: His Unfortunate Prescience) 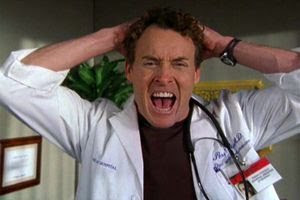 Jerry, the problem is that the offense is predicated around the guards. That's why Washington and Szabo don't get the ball. They are mostly out there setting high screens for Jenkins, Williams and Lester.

They had as many attempts combined in the Mary game as Vines had (all but one were of course of the three point variety and he was 1 of 9). And all of Washington's shots, sans one, were outside jumpers. The one exception was a post play where he easily banked it in for too.

The only one who demands the ball in the post is the freshman Kanacevic. Maybe its time that he starts. But maybe also they need to design plays to Washington to post up and demand the ball more.

As usual Jerry, great articles. Keep up the good work.