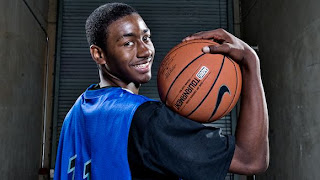 You'd be smiling, too, if you were John Wall and knew there would be no punishment coming forth from the NCAA.
The NCAA finally got off its ass and got around to settling the Brad Kelleher case this week, a mere four months after it had all the information it needed to make a decision, and to the surprise of nobody, declared the junior transfer ineligible because he signed a contract with a professional team in his native Australia five years ago.
Tom Pecora, recognizing the fine line between gritting one’s teeth and playing by rules designed to make life difficult for schools such as his and getting screwed, absolutely hammered the NCAA for its hypocrisy and unfairness in this Steve Marcus article at Newsday.com. Speaking of getting screwed, you won’t be able to read this article if you’re not a Cablevision victim, err, subscriber, so here’s a couple money quotes from a too-short article (hooray for postage stamp-sized newspapers!)
“There are kids playing in the Big East who had their own reality shows. There are kids in the Southeast Conference who admitted to taking money from agents, and my guy didn’t do anything. He completed an application to play in the league. It’s a league that everyone who lives in Australia plays in. They are trying to say by completing an application that application is a contract.”
“This kills us. We are dressing seven scholarship players. [If] we get this kid back, [then] there’s no rush with the other two. This guy was supposed to play 35 minutes a game for us. He was supposed to be a starting guard who would have had a tremendous amount of minutes. He’s a wonderful kid. He said, ‘Coach, I never took a penny from anyone. I had a full-time job when I was playing. They called me once in a while to play. I wasn’t a star, I was a kid.’”
“They are basically a non-profit organization that’s run amuck. They’ll do anything to take care of their BCS members who have a tremendous amount of power and juice. That is who they work for.”
Pecora is right, of course, and anyone foolish enough to call for his firing should be ashamed because you can’t measure the value of a head coach who will stand up for his program and speak the truth, even if it means putting a target on his own back and potentially ruining any chance he has at moving up to one of the schools that makes the rules by which everyone else has to live.
The entire world has known for years that there’s a pretty good chance Reggie Bush and O.J. Mayo were paid more at USC than they are by the New Orleans Saints and Memphis Grizzlies, respectively, yet the school remains unpunished by the NCAA just hired as its new head football coach Lane Kiffin, who was on the USC staff when Bush starred for the Trojans and who racked up plenty of “secondary violations” during his one year as the head coach at Tennessee.
And John Calipari is free to coach his third school to a vacated Final Four appearance, and free to coach John Wall, who played for an agent in summer ball. But don’t worry, the NCAA can toast itself this weekend and declare its sports clean, because it punished a foreign kid from Hofstra.
Email Jerry at defiantlydutch@yahoo.com or follow Defiantly Dutch at http://twitter.com/defiantlydutch.
Posted by Jerry Beach at 8:26 AM

This is with out a doubt one of the worst travesties of college basketball.

I'm very upset about this, as a fellow fan of the CAA amongst others or really I'm a fan of letting kids play the game they are good at playing.

I hope John Wall explodes from being so perfect. Well written.

This is really messed up. This would never be an issued with a BCS school.