Nobody asked me, but…here’s how Hofstra could end up in the A-10 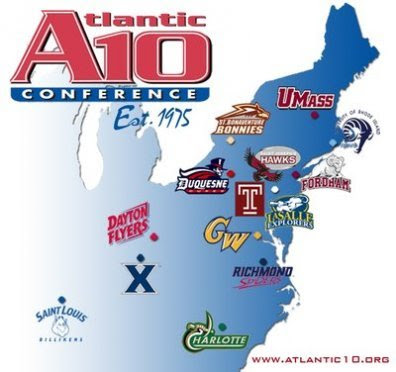 Hopefully, the reconfigured A-10 will have a more mathematically accurate name. (This won out over a picture of Jillian Barberie, sorry fellas)

Just because I’m writing about how Hofstra could end up in the Atlantic 10 doesn’t mean I believe it can or should happen. I haven’t changed my mind since three months ago yesterday, when I wrote that a move to the A-10 would by no means provide the Flying Dutchmen basketball team an easier path to the NCAA Tournament nor fuller houses at the Arena. That Litos agrees with me means I might actually be on to something for one of the few times in the last nine months.

But assuming a move to the A-10 is what the administration wants, here’s how it could work. Merely adding Hofstra to the A-10—and making it the A-15—won’t work. A 14-team conference is already as bloated as the before picture in a NutriSystem ad. My plan does reduce the A-10 to 13 teams, not quite a Jillian Barberie-esque loss, but better than the way it was. (This is what happens when you write in the middle of the night...NutriSystem references)

Here’s what would have to happen:

1.) Richmond and Charlotte to the CAA. Longtime CAA fans still haven’t forgiven Richmond for bolting the CAA for the A-10 in 2001, a move which set off the whole poaching of the A-East by the CAA. But those at the administrative level are more practical about these things, and I imagine both the CAA and Richmond would admit they never should have divorced in the first place. Litos reports Richmond’s A-10 games have all the excitement of a church service, but a return to the CAA would instantly make the Spiders the biggest rival of every other Virginia school in the CAA. Plus, Richmond’s national champion football team already plays in the CAA. This is a fine fit. Make it happen.

Charlotte, meanwhile, is already selling personal seat licenses in anticipation of its first season of football in 2013. That’s right: The school is selling you the chance to buy tickets to a program that is at least four years from debuting. God Bless America.

Charlotte administrators hope to follow the path of South Florida and make I-AA a quick pit-stop on the way to I-A (and, one presumes, the Big East). Such big plans might make the CAA reluctant to welcome Charlotte, especially since it’d probably mean having to add yet another football-playing school by the middle of next decade, but hey, Hofstra wants to leave after eight years, so having to reconfigure on the fly is nothing new.

2.) Fordham to the Patriot League. As mentioned Monday, the move to the A-10 has been an unqualified disaster for the Fordham men’s basketball team. The Rams lack the facilities to compete in the A-10 and their academic standards remain at a Patriot League level. This, too, is a reunion that makes sense for both sides. The one hurdle might be Fordham’s desire to add football scholarships: The blog Lehigh Football Nation does a great job of explaining why the rest of the Patriot League may not be ready to sink that kind of dough into its football programs any time soon. But at the least, Fordham to the Patriot League in every other sport makes all sorts of sense.

3.) Saint Louis to the Horizon League. What, exactly, is Saint Louis doing in the Atlantic-10, anyway? I guess you could say the same thing about Ohio schools Xavier and Dayton, but at least Ohio has a semblance of a connection to the east coast. Not so much Missouri.

4.) Hofstra, Northeastern and Drexel to the A-10. Talk about burying the lede. The A-10 is a good match for the CAA Three on multiple levels. The A-10 is the best existing home for Hofstra and Northeastern if they deemphasize or drop football. With no football team, Drexel no longer fits with a southern-based conference that wants to be known as much for its football as its basketball. And the three schools leaving together provide each other some traditional rivals in the new conference.

In addition, each school has some nice natural rivalries with the current A-10 membership. Hofstra and St. Joseph’s have played a couple great NIT games in the last five years. Drexel’s inclusion gives the A-10 four of the Big 5 Philly schools. And Northeastern provides the A-10 three New England schools.

As important as the fit for men’s basketball is the fit in every other sport. The A-10 sponsors 14 of Hofstra’s 18 sports. We’ve already placed the football team in the new ECC, and presumably, the CAA would welcome Hofstra as an associate member in men’s lacrosse and wrestling (where it is the league’s highest-profile program in both sports) as well as women’s golf.

An odd number of teams isn’t as unusual as I thought: Nine Division I conferences have an odd number. So unless someone powerful within the A-10 has triskaidekaphobia, this could work.

Damn. Reservations about how it’ll help the men’s basketball programs aside, this actually sounds possible. So that means it won’t happen. And I still think my third idea—detonating the Division I landscape and creating four new conferences, one of which will feature Hofstra as a core founding member—is the best idea. Tune in later today or first thing tomorrow for that.

Email Jerry at defiantlydutch@yahoo.com. And join the Defiantly Dutch group at Facebook today!
Posted by Jerry Beach at 6:43 AM

Jerry, terrific and thought-provoking stuff about potential conference realignments. But I must point out one thing, because I'm a nitpicker--Drexel is NOT part of the Big 5.
The Big 5 is THE Nova, La Salle, St. Joe's, Temple and Penn. Drexel is the underprivileged cousin.