Bits and Bytes: The Conference Shuffle 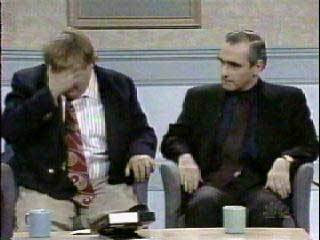 The headline to the article by Dick “best toupee in sports journalism” Weiss in the Sunday Daily News doesn’t leave much room for interpretation: “New conference home is what Hofstra needs to take hoops program to the next level.” Like the rest of us, Weiss doesn’t know exactly how this will happen, only that it should.

My favorite part of the article was the ancient photo of Pecora the News used. No, not one of him from Adelphi, but one in which Aurimas Kieza is in the background. I really would have been impressed if they managed to find one of Pecora with, say, Chris McRae in the background. Oh yeah. Bet you didn’t think you’d read that name today did you?

The most interesting part, meanwhile, was Pecora saying he worries the CBI and CIT will give the NCAA—which now owns the NIT—the excuse to turn the NIT into the JV tournament for the Big Six and relegate the mid-majors to the pay-to-plays.

That makes a lot of sense, and I appreciate Pecora still toeing the company line about why Hofstra didn’t accept a bid to either tourney. But still: Pecora still thought the CBI and CIT were good ideas for a team such as his in February. And if these fledgling tournaments that may admittedly be to college basketball what the Garden State Bowl was to college football were good enough for Old Dominion, then they should have been good enough for Hofstra.

Enough about that. A couple other bits and bytes about the conference shuffle we pondered last week:

—Thanks to Gonzo Hofstra Fan, a Loyal Reader who correctly points out that Drexel is not a member of the Big 5. Penn is, along with Villanova, Temple, St. Joseph’s and LaSalle. However, in my defense, Wikipedia—which is never wrong—states that Drexel has become something of an unofficial honorary (is that redundant?) member of the Big 5 and that it is part of the City 6, a term I’d never before heard. I hope Drexel does join the Big 5 and that the schools are still referred to as the Big 5. That would be very A-10ish.

—Isolated rumble or the beginning of the nationwide seismic conference changes? Campbell is leaving the Atlantic Sun for the Big South. Hmmm.

—The Patriot League going the full scholarship route in football in order to get back a school that never should have left sounds good in theory, but a closer read of Lehigh Football Nation’s excellent and in-depth post about the financial difficulties several Patriot League schools are experiencing makes me less certain that Fordham will be able to return. Schools that are pleading poverty can’t very easily add scholarships to football programs that are probably losing money already. An obvious compromise would be to accept Fordham back into the Patriot in everything but football, but does that solve anything for a school that looks as if it’s ready to make football its marquee sport? Might it be better in the long run for Fordham to find an all-sports home rather than going independent in football or trying to find a conference where it is not a geographic fit, a la Stony Brook in the Big South?

Email Jerry at defiantlydutch@yahoo.com. And join the Defiantly Dutch group at Facebook today!
Posted by Jerry Beach at 6:42 AM