Oh hi Mason Nation! How have you been? 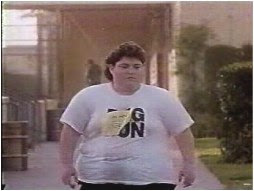 Middle-aged blogging...don't do it!
A year ago at this very moment (well, not THIS very moment, but the moment at which I was typing this last night), I was about ready to forgive and forget this whole George Mason thing. OK, I wasn’t ready to forgive and I’ll never forget 2006, but I was thinking it was about time to let bygones be bygones and just watch Mason games without receiving ample doses of intravenous blood pressure medication.
I came to this realization after an enjoyable day of driving and night of watching basketball in Fairfax. I drove there on the spur of the moment to watch the Flying Dutchmen take on George Mason and met beforehand a fellow jettisoned sportswriter and a couple of his jettisoned sportswriter friends, all of whom are Mason alumni, at Brion’s, a bar across the street from the Mason campus. Imagine Bogarts—err, Bar Social—if anyone on Long Island cared about Hofstra hoops and you’d get an idea of the décor inside. Other than being hit in the gro—err, face—with reminders of Mason’s Final Four run in 2006, it was a cool place to grab a bite to eat.
Then we went into the Patriot Center, which was also a cool place to watch a basketball game with all the caveats about Brion’s, and watched the Flying Dutchmen, in a familiar 2009-10 storyline, almost but not quite beat Mason. Other than the loss and their fans channeling Paul O’Neill every time a call went against the Patriots and the occasional leather lung jackass who found it funny to shout “TONY SKINN!!!” as the Dutchmen shot a free throw, I had a good time.
I walked back to Brion’s with my friend and his friends, bought a round of drinks for the gang—because I’m just that nice a guy—and got back into my car for the ride home.
These guys aren’t too bad, I thought as I drove along 495 south of Baltimore. Hofstra and George Mason are remarkably similar as schools—long-time commuter colleges founded deep into the 20th century that are trying to break free of the tag by ramping up their academic profile in hopes of keeping pace with schools a century or more older.
Athletically speaking, before the last 15 years or so, our basketball histories were eminently forgettable. We both traveled a great distance just to get to 2006. And now neither one of us played football. In a weird way, we were almost brothers—bitterly hateful brothers, but hey, isn’t that what sibling rivalry is all about?
Oh sure, I still didn’t like Jim Larranaga or Tom O’Connor very much, nor did I care for anyone who wore the uniform in 2006, but hell, you can’t hate forever. Life is too short…
And then I saw the streak of white light coming at me from the left. I had enough time to think “Oh shit,” but not enough time to actually utter the words before I was hit and shoved into the lane to the right, where I pinballed off another car and was sent careening across four lanes of pretty heavy traffic.
With every spin, I anticipated the final, fatal hit, one that would assure my next blog posting would be from The Other Side, wherever that is. But it miraculously never arrived, and several screamingly terrifying seconds later, I found myself going backwards in drive in the breakdown lane. Night Ranger’s “Goodbye” was playing on the rental car’s CD player. That’s ironic, I thought. I patted myself down, not entirely sure I was still alive and half-expecting to find a vital organ hanging out.
A few minutes later, the woman who hit me and I struck up a conversation, because talking to the person who nearly wiped you off the planet is apparently what you do when you dodge dismemberment. She asked where I was from and where I’d been before the crash. I told her a college basketball game in Fairfax.
“Oh, George Mason?” she said.
“Yeah.”
“I went there.”
No kidding. Now they’re actually trying to kill me. 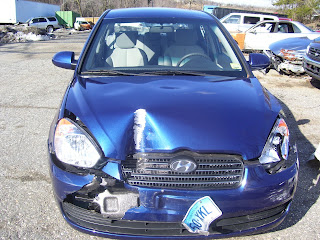 You did this to me, Mason Nation!!!
But getting the scare of a lifetime courtesy of a drunken Mason alum—oh yes, I haven’t even gotten into that, or how she failed her sobriety test miserably, or how we ran into each other at the junkyard 12 hours later, when we were both claiming items from our wrecked cars—didn’t cement my Mason contempt. That was random, fluky, wild stuff—a good story, especially since all my bones remained intact, but just Tarantino-level weirdness. Honestly, I half-expected the freaky guy at the junkyard to lock the door behind us and bring out the gimp.
It took another 15 days for the seeds of hate to be sowed at the Arena. I drove into Hempstead that night already in a bad mood. The Dutchmen were spiraling downward, Mason was red-hot—I knew it was going to be a lousy night long before the opening tap. And it sucked almost as bad as, umm, getting into a car accident south of Baltimore: Mason won, 90-72, and you can see what pissed me off here.
Thanks to the Twitters and the #CAA feed on the CAAZone, I was already loathed in Mason Nation before I posted that, and once it went up, the response was swift and predictable. It had been a long time since I’d been called such names. I'd never been so scorned for my employability, or lack thereof. And I didn’t realize last January that having someone start a fake Twitter on your “behalf” was so oddly honorific.
Fifty weeks and one day later, I stand by every word of what I wrote and still feel the way I feel about Mason and certain higher-ups. My favorite team is still Hofstra, and my second-favorite team still whomever is playing Mason. No apologies for that.
But the funny thing is the fallout, in a weird way, further established the commonality I’d begun to feel in Fairfax. Not with everybody, of course: The Mason fans for whom Freshman English was an elective (my second-favorite letter from last January: the one that ended with the signature “Employeed Mason Grad.”) stopped fake Tweeting, largely disappeared and went back to participating in their usual activities such as peeing in the sandbox and getting banned at the CAAZone.
In one very special case, however, one of these folks started his own blog, which is the CAAhoops version of Martha Dumptruck walking into traffic in hopes of emulating the cool kids. That’s cute. It’s "crutial" that “adults” find a hobby and come to realize that not everyone should have a blog.
After the initial wave of profanity-filled invective—on both sides—subsided, though, I realized bantering with the intelligent wing of Mason Nation is a lot of fun. I realized it’s not their fault they root for a bunch of bullying meanies, and they realized it’s not my fault I root for a team whose coach and athletic director don’t have Satan on speed dial. These folks also realized sentences such as the one you just read are meant in jest. Mostly. Partially.
We also realized we’re generally in the same position here, even after Mason’s stupid no-good rotten fraudulent Final Four run in 2006. We still share a passion for mid-major hoops, which automatically makes us better than those who don’t. We still root for schools and a conference in which the season comes down to the first weekend of March. We still root for schools who, despite the recruiting boost they enjoyed in the aftermath of 2006, are still usually outclassed in games against BCS programs.
We like baseball, and football, and movies about war, and we can easily get along for 363 or so days per year. And today? Today they will let me have it, and I will let them have it, and I will pray to some kind of deity that 12 hours from now, I’m the one still letting them have it and not the one who lost the Twitter hashtag bet.
And I have come to understand that while I would love for the Dutchmen to win tonight and end their five-game losing streak against the Patriots (beat Mason), the season will not be made or broken by what happens tonight (Beat Mason) and we can’t get too carried away one way or the other (FOR THE LOVE OF GOD BEAT MASON) because it would suck to win in January and lose in March (I’LL WORRY ABOUT THAT LATER JUST FREAKING BEAT MASON TONIGHT).
That’s what I tell myself, anyway. And if the Dutchmen lose, I will take solace in the fact the drive home is a lot shorter tonight than a year ago this week and that I won’t get hit by a drunken Mason grad. Probably. Hopefully.
Email Jerry at defiantlydutch@yahoo.com or follow Defiantly Dutch at http://twitter.com/defiantlydutch.
Posted by Jerry Beach at 9:46 AM

Don't worry. Some of us, feel the same way about Hofstra. For many different reasons. Some for basketball, some for cheerleading, and some just because Hofstra is involved in certain sports politics. But I almost went to Hofstra, before I moved to VA. Then, that school, that was down the street from my house, was forgotten, and my choice came down to ODU and Mason. From there, is history. Good luck tonight!